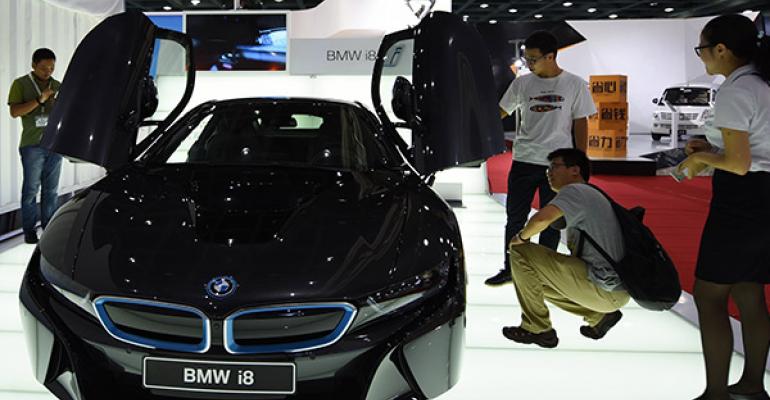 CATL is the No.2 maker of electric-vehicle batteries, with business for now limited to China, but&nbsp;is on the short list to be the main EV battery supplier to European OEMs including Volkswagen, Mercedes-Benz and PSA Group.

TOKYO – Had Bob Galyen written his own story, it almost certainly would have had a different ending: an American in Indianapolis, where he worked for Delco Remy’s battery division and headed the battery team for General Motors’ groundbreaking EV1 electric car, or an American in Auburn Hills, MI, where he ran Magna E-Car’s battery startup.

It almost certainly wouldn’t have been an American in Ningde, China, where for the past five years Galyen, 62, has worked as chief technology officer for Contemporary Amperex Technology Ltd.

Not a household name – yet – CATL has rapidly become a major player in the global battery market. CATL wasn’t even a company until 2011, when it was spun off by Hong Kong-based Amperex Technology, a leading supplier of small batteries to Apple and other mobile-device manufacturers.

It now ranks second in production of batteries for electric vehicles with business for now limited to China. Galyen expects it to pass No.1 Panasonic early this year. More importantly, CATL is on the short list to be the main EV battery supplier to European OEMs such as Volkswagen, Mercedes-Benz and PSA Group.

Between January and August 2017, it held a 28% share of EV-battery sales in China, ahead of BYD’s 17%. Extrapolating from global sales of electric and electrified vehicles, this means CATL has a global market share of more than 10%.

An estimated half of CATL sales on a pack basis are to Chinese bus makers. The supplier entered the electric-car market in 2013 with the limited-production Zinoro 60H, a Chinese derivative of BMW’s X1.

To put CATL’s business scale into perspective: In 2016, according to Galyen, CATL delivered more battery packs to one customer, Zhengzhou Yutong Bus, than Tesla had used in all of its cars since the U.S. EV maker’s inception.

“It’s a back-of-the-napkin calculation,” he says, “but yes, we delivered more than 250,000 packs to Yutong Bus in 2016. Keep in mind that electric buses, depending on their size, use between six and 24 packs per bus.”

A straight talker who grew up and went to college in Indiana and serves concurrently as chairman of NAATBatt International and the SAE’s international battery standard steering committee, Galyen raised eyebrows in September when he warned the U.S. was falling behind in battery technology.

“The U.S. needs to step up its game,” he said at the Battery Show Exhibition & Conference in Novi, MI. “Clearly, we’re getting behind.”

Separately in a WardsAuto interview, Galyen cautions this technology deficit, coupled with capacity shortages if automakers hope to meet zero-emission-vehicle mandates in states such as California, “could become a serious national security issue.

“The situation isn’t much different in Europe, where there are no global-scale battery manufacturers and only Samsung SDI among the top five producers,” he adds. “We’re hoping to be one.”

In the U.S., Xalt Energy and EnerDel, two leading American manufacturers, have installed capacity of only 700 MWh and 200 MWh. “We can produce that amount in one week at one plant in China,” Galyen says.

The three largest battery manufacturers in the U.S. are Japanese, South Korean and Chinese, respectively: Panasonic, supplying Tesla; LG Chem, supplying GM, Ford and FCA US; and GSR Capital, supplying Nissan North America. A123 Systems, one of the early market leaders, is owned by the Wanxiang Group of China.

In Europe, Zurich-based ABB Technology Ventures has joined NorthVolt, a Swedish startup, to build a 32-GWh plant in Sweden. According to a Bloomberg News report, NorthVolt’s CEO, a former Tesla executive, hopes to begin production in 2020.

In the next three years, CATL will have upwards of 50 GWh of capacity in place. And that doesn’t count capacity in Europe and North America, where the supplier is reported to be close to a decision on building one or more plants, each probably less than 10 GWh.

Likely customers are Volkswagen, which announced plans at the Frankfurt auto show in September to build 80 new zero-emissions vehicles by 2025, and Daimler, which revealed it would completely transform its Smart brand to electric powertrains by 2020.

Separately, Mercedes-Benz, Daimler’s main luxury brand, disclosed it would invest $1 billion in the U.S. to build a new EV and battery plant. According to news reports, the investment will be made at the Tuscaloosa, AL, site where Mercedes-Benz US International produces GLE, GLS and C-Class models.

Both VW and Daimler are leaning toward CATL, but this is unconfirmed.

“I won’t deny the news reports,” Galyen said in an interview preceding CATL’s mid-November announcement that it would seek a $2 billion public offering to fund facility expansions. “In China, as you are aware, we are working with BMW, Daimler and Audi.”

Galyen notes gigawatt-size plants take between 18 and 24 months to build and commission. “But you also need to have sustaining business before you start building with bricks and mortar.”

According to the Reuters news agency, CATL reported net earnings of $471.5 million on sales of $2.1 billion in 2016. Sales grew threefold from 2015 levels.

Thanks to an early endorsement by billionaire U.S. investor Warren Buffett, BYD Auto remains the best-known name in the Chinese market and still is the biggest manufacturer of EVs, mostly plug-in hybrids.

Between January and September, the Shenzhen-based automaker sold 69,094 units, a close second behind Tesla, and putting it on track to sell 92,000 for full-year 2017, according to the EV Sales blog.

In its battery business, BYD has fallen to second in China and fourth globally.​

BYD uses lithium-iron-phosphate or LFP cathode materials, which are better suited for short-range applications such as commuter buses. Unlike CATL, BYD has yet to transition into nickel-manganese-cobalt (NMC) cathodes, although an industry study by Hong Kong investment bank CLSA indicates most major Chinese battery makers are beginning to make the switch.

In the electric-car segment, it supplies four foreign OEMs: BMW Brilliance, Beijing Benz, Changan PSA and FAW-Volkswagen. The speculation is that GM China will use CATL batteries for its reported lineup of 10 new electrified vehicles planned in the next few years.

One reason is that GM’s main supplier, LG Chem, is involved in a dispute with the Chinese government over the operation of its Nanjing plant. While reports are conflicting, it appears both LG Chem and Samsung SDI, which operates a battery plant in Tianjin, failed to meet China’s certification standards for selling NMC batteries to domestic automakers.

The effect, regardless of whether the government’s claims are real or a ruse to protect home-market suppliers as industry analysts believe, is that South Korea’s leading battery makers are being squeezed out of the Chinese market. And CATL has been a beneficiary.

Korean battery makers are not alone in being impacted by China’s protectionist trade policies. In March 2015, Midland, MI-based XALT Energy announced it had entered into a $1 billion agreement with Hong Kong-based Hybrid Kinetic Group to supply lithium batteries for electric buses.

After meeting China’s certification standards for its lithium-titanium-oxide cell technology, the U.S. manufacturer was not included on the Ministry of Industry and Information Technology’s so-called White List and thus did not qualify for subsidies, effectively killing the contract.

How serious a competitor is BYD? “Honestly speaking,” Galyen says, “we don’t compete with BYD because BYD produces most of its batteries for itself – for BYD buses and BYD cars. It is extremely vertically integrated.”

CATL in January 2017 bought a 22% stake in Valmet Automotive, the Finnish contract automaker and engineering specialist, to work jointly on EV powertrains, including integrating batteries into production vehicles. Valmet has ties with Mercedes-Benz, Porsche, BMW and Opel (now part of PSA Group) and currently assembles Mercedes A-Class and GLC models.

On the technical front, Galyen disputes analysts’ claims that CATL trails Korean and Japanese battery makers technologically. CATL’s NMC cells have achieved energy density of 270 Wh/kg, thus the supplier is further along the development curve than some analysts have indicated.

Galyen, who will receive a lifetime achievement award from NAATBatt International in March, disagrees with prognosticators who say battery costs will fall to $125/kWh or less in 2025.

“At a pack level, I think $140/kWh is achievable,” he says, basing his more conservative forecast on a belief that cobalt costs will rise.

As for China and electric cars: “It is clearly trending in the right direction. We’re building plants as fast as we can just to keep up with demand. The government is fully committed. In the 1980s, we kept hearing about this magic battery called lithium. Here we are 30 years later and we’ve finally got lithium into production and the rate of growth is faster than we expected.”

So says the American in China who headed the battery team for the EV1, the first electric car of the modern era.