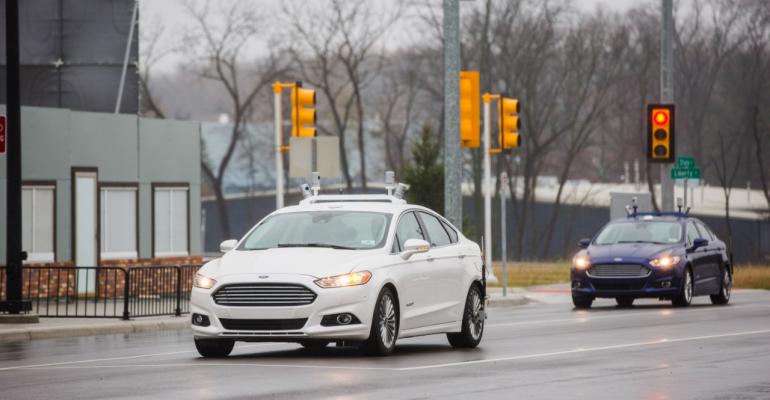 <p><strong>Autonomous vehicles could be $1.3 trillion boost to U.S. economy.</strong></p>
Vehicles

Something happened in the past year to turn autonomous-vehicle development from a science project to full speed ahead, Intel&rsquo;s Elliot Garbus says.

NOVI, MI – What a difference a year makes.

“A year ago, I would have had a clear vision of autonomous,” Garbus says in a keynote presentation here at the SAE 2016 Convergence conference and exposition focused on automotive electronics.

There were the disruptors, the Silicon Valley startups that were in go-fast mode conducting what Garbus says largely were seen as “science projects” around autonomous-vehicle development. That contrasted with the more measured approach by automakers, which were focused on a step-by-step rollout of advanced systems that slowly would add up to autonomous drive.

“But something happened on New Year’s (Day),” the Intel executive says. “And a race began.”

Garbus rattles off the number of moves by automakers and others in recent months to step up autonomous-vehicle development and get cars to market faster, including Ford’s push to have vehicles in hail-service fleets by 2021, General Motors’ acquisition of a stake in Lyft and purchase of developer Cruise Automation, Google’s expansion of real-world testing of its driverless technology and Baidu’s (China’s Google competitor) planned entry into the sector.

There also is his company’s tie-up with BMW and Mobileye expected to lead to development of an open technology platform for autonomous vehicles, Garbus adds. “So the race is on; (autonomous) is coming.”

Look for the technology to surface first in fleets, both for moving passengers and goods, he notes, because autonomous vehicles will need to operate in more controlled environments along well-mapped routes and with regular service intervals.

One thing needed is better external communication between the vehicle and the cloud, which will store vital data used in part to update onboard software. Garbus sees automakers moving to 5G cellular service to increase the bandwidth and boost the communication speed. Intel will begin experimenting with 5G in vehicles used at the 2018 Winter Olympics in Korea.

“A tremendous amount of computing will be required, so we’ll need the bandwidth,” he says. “This is a critical piece of autonomy.”

Autonomous-vehicle technology has the potential to have a $1.3 trillion impact on the U.S. economy in fuel saved, productivity gained and the expected reduction in fatalities and injuries, Garbus says.

Car insurance costs are expected to drop up to 80% over the next 10 years, he says.

“That (alone is) stunning, and quite an economic incentive.”