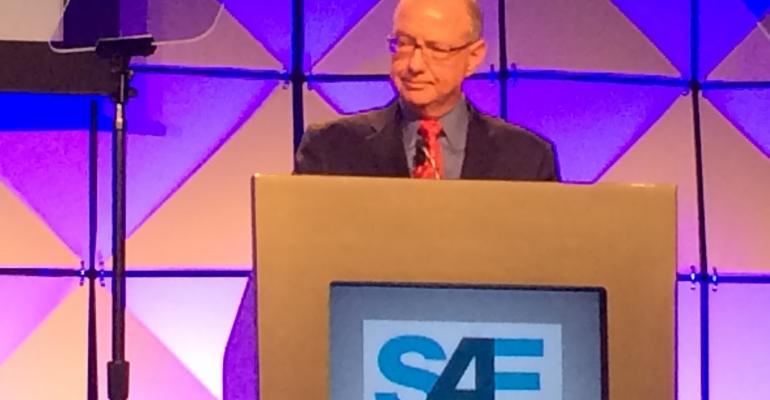 The transition to autonomous vehicles is coming and it will affect everything from the width of a highway lane to how goods are trucked to market, says Michigan transportation chief Kirk Steudle.

DETROIT – Transportation is undergoing a paradigm shift that is necessary, but it won’t necessarily be easy, Michigan’s transportation chief tells the SAE World Congress here.

“We’re in a messy transition for the next 20 years,” warns Kirk Steudle, director-Michigan Department of Transportation, as autonomous vehicles begin sharing the roads with non-autonomous vehicles while drivers make the adjustment and as rules and regulations are written to govern the new transportation technology.

Steudle likens the coming transition to the turn of the 20th century when horseless carriages joined horses and buggies on the main commerce corridors. During the transition to automobiles, horses and cars shared the road, but the older transportation mode eventually was relegated to less-traveled back roads to make way for the new.

Similarly, when the interstate highway system was created and built, it was designated strictly for vehicles capable of 45 mph (72 km/h) or faster, limiting access for slower, less-capable vehicles, he notes.

Steudle foresees such a future for autonomous vehicles, with dedicated lanes or whole roadways. The result will be a far safer and much more efficient transportation system in the same space as more vehicles can travel in less space and still be safe, he predicts.

For instance, 12-ft.-wide (3.6-m-wide) interstate highway lanes were designed in the 1960s to allow some weaving space for vehicles that were equipped with bias-ply tires, vague steering and soft suspensions, he says. Today’s cars, especially those with lane-keeping technology that helps hold the center of the lane, are far more capable of driving in a narrower lane, freeing up valuable real estate for additional lanes in the same space. Spacing between autonomous vehicles also can be tightened to fit more cars in existing lanes.

It’s also about saving lives, he says, noting that NHTSA estimates autonomous vehicles could eliminate 80% of highway fatalities. “It is really about safety, first and foremost.”

Steudle sees other implications of an autonomous future, all with the potential to save time and money:

“It’s all about mobility – and what we refer to as the new mobility,” Steudle says. “This has the potential to change every single aspect of travel.”