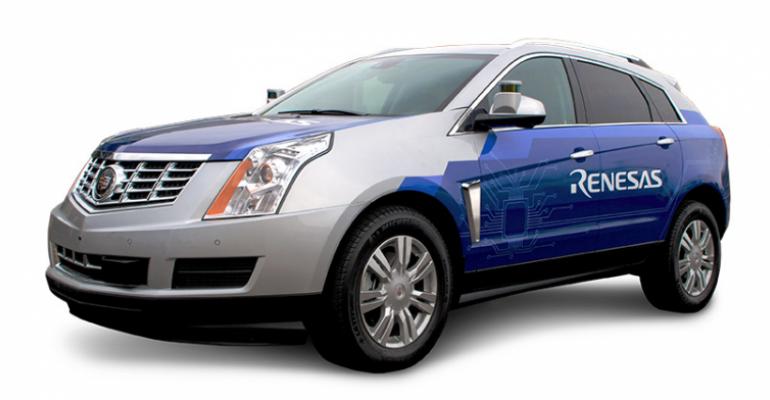 Renesas
<p><strong>Microprocessor supplier </strong><strong>Renesas is developing a fleet of autonomous vehicles that will be an open laboratory for automotive customers and vendors and serve as a &ldquo;sandbox&rdquo; for new ideas.</strong></p>
Vehicles

Insiders say three or four years ago, automakers decided they didn&rsquo;t want to hand over their interiors to giant consumer electronics providers and started reaching into the lower tiers for knowledge and more control over their brand identities.&nbsp;

ORANGE COUNTY, CA – The idea that two guys working in their parents’ garage can change the world fuels Silicon Valley lore and everyone else’s inferiority complex.

As automakers implement connectivity and self-driving technologies, it has been assumed they would rely on Silicon Valley’s tech giants and innovation skills to help churn out the self-driving smartphones-on-wheels consumers were thought to be demanding.

That assumption is running out of gas.

Driver distraction has become an overriding issue, derailing the notion of turning every instrument panel into a big smartphone. What’s more, it’s been decades since two people could create a major disruptive technology without millions in seed money. And Apple and Google are a long way from their garage days. They have grown so big and powerful it now looks like they want to own the automotive market, not just supply it.

Meanwhile, automakers have decided they don’t want interiors that look like they were sourced at the local Best Buy, and Silicon Valley no longer is the only game in town for self-driving and related technologies: The world is beating a path to automaker doors in Stuttgart, Tokyo and Detroit to supply hardware and software.

In place of famous Silicon Valley names, a network of established automotive electronics and software suppliers is developing advanced driver-assist systems, connectivity and autonomous features that are customized to OEM specs instead of being hand-me-downs from the consumer electronics industry.

And these suppliers are finding ways to tap into the genius of young, underfunded entrepreneurs just like Silicon Valley is famous for, but they are throwing their nets far outside the California border.

“A few rich companies have resources to develop autonomous driving. Unless we can democratize this and bring it to the masses so anybody can contribute to development, the pace of progress will be limited,” says Ali Sebt, CEO of Renesas Electronics America, a unit of Renesas Electronics, the world’s largest supplier of microcontrollers.

“We are going to democratize and enable people who can develop the fuzzy logic or artificial intelligence or analytics required to achieve autonomous driving,” Sebt tells WardsAuto prior to addressing 1,400 engineers and programmers at Renesas DevCon, the company’s biannual confab in Orange County, CA.

Sebt says the reason the smartphone took over the marketplace from older cell phone designs is because it is a platform used by armies of developers who use smartphone data, processing capabilities and connectivity to create thousands of apps.

To help this process along, Renesas has developed a fleet of vehicles to become an open laboratory for automotive customers and vendors, collaborating with companies such as Moscow, ID-based Harbrick, which has an autonomous driving platform called PolySync, NewFoundry, based in Ann Arbor, and numerous others. Silicon Valley companies are in the mix as well, but so are companies from India and suburban Detroit, such as NewFoundry.

“Advanced automotive systems for cars are complex to develop and carry a heavy burden of responsibility. With the new development platform, we are leading a unique collaboration with software, IP and tools providers to remove obstacles in the path to automotive innovation,” says Amrit Vivekanand, vice president of Renesas Electronics America’s Novi, MI-based  Automotive Business Unit.

“There are many, many small companies out there that have amazing IP (intellectual property), and they just don’t have a means to test, validate and get in the game. I think we are missing out as an industry, and I think this will enable them to get into the game and show what they have,” Vivekanand says.

Renesas will expand, develop and offer new vehicle-level platforms that can be used by algorithm experts, sensor makers, system integrators and other subject matter experts as a working sandbox in real-world environments where they can collaborate, validate, experiment and benchmark innovative ideas. The scope of these test vehicles will be expanded going forward to integrate cockpit, HMI, safety, security and powertrain platforms, the company says.

Of course, automakers have been working on self-driving vehicles on their own for years, and

But insiders say three or four years ago, automakers decided they didn’t want to hand over their interiors to giant consumer electronics providers and started reaching into the lower tiers for knowledge and more control over their brand identities.

“OEMs are going directly to companies like ours and the silicon vendors and saying, ‘We want to understand the technology well enough, and we want to create our brand and maintain our brand on the user experience side and then bring Tier 1s in at the right time and right place,’” says Michael Juran, CEO of Colorado Springs-based Altia. Altia has about 50 employees and offices in Detroit, Tokyo and Germany.

OEMs are asking Tier 2 and Tier 3 suppliers how they can give drivers what they want without ceding the car to Silicon Valley, Juran says.

“From our perspective, we give them the opportunity to maintain control of that car, because we give them ways to build UIs (user interfaces) that don’t require Android, Linux, iOS (Apple) or Microsoft Windows.

“People say they love the richness of the UI and the graphics and ask if they have to use a Windows operating system or Google Android operating system to get it. We say no, we can give you a tool chain that will allow you to generate GUI (graphical user interface) software for that hardware platform, which in many cases is made by Renesas, and not require you to bring in one of these platforms or operating systems from Silicon Valley,” Juran says.

“Automakers are going back to the way they used to design cars, which is you design the car for the total experience and don’t just throw in as much technology as you can possibly throw in.”

Google Not Going It Alone With Autonomous Car
Aug 21, 2015