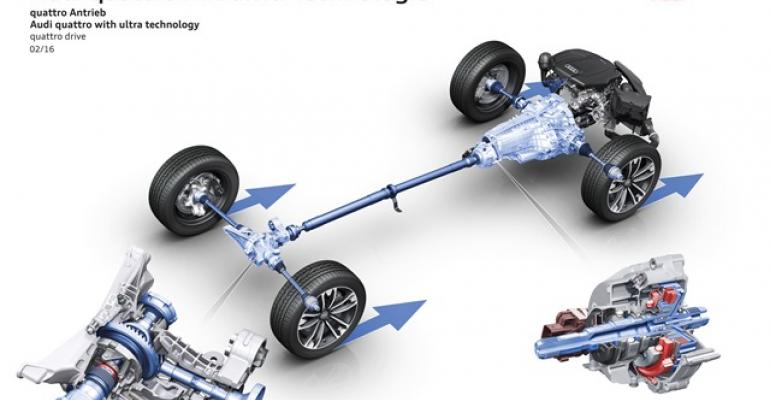 Set to debut on the upcoming A4 Allroad, the quattro ultra system initially will be offered on models based on Audi&rsquo;s MLB platform in combination with its new high-compression turbocharged 2.0L 4-cyl. gasoline engine and 7-speed S-tronic dual-clutch gearbox.

INGOLSTADT, Germany – Audi unveiles a new version of its quattro all-wheel-drive system, claiming it critically improves efficiency and fuel economy when mated to models fitted with a longitudinally mounted engine.

The new quattro system uses an electromechanically operated Haldex-style multiplate clutch and heavily revised rear gear set that combine to eliminate mechanical drag by eliminating drive to the rear differential and, with it, the rear wheels when the driver requires only front-wheel drive.

To be marketed under the name quattro ultra, the new system abandons the widely used Torsen torque-sensing system, as well as the central differential and rear differential hardware used by Audi in one form or the other since the inception of its original quattro AWD system back in 1980.

In its place is a fully networked setup capable of analyzing driving conditions every 100 milliseconds and automatically providing either front- or all-wheel drive depending on factors such as longitudinal acceleration, engine torque, steering angle, yaw rate, prevailing traction and driving style.

Set to make its debut on the upcoming A4 Allroad prior to being fitted to the new A5 Coupe type and second-generation Q5, the quattro ultra system initially will be offered on models based on Audi’s MLB (modularen langsbau [modular longitudinal architecture]) platform in combination with its new high-compression turbocharged 2.0L 4-cyl. gasoline engine and 7-speed S-tronic dual-clutch gearbox.

Unlike the mechanical Torsen-based quattro system, which based its operation principally around existing traction levels, the new electromechanical system is influenced by a wider range of information obtained by various sensors, as well as data relating to the road provided by the navigation system.

By combining this information, Audi says its new quattro ultra system can provide predictive operation by constantly sensing whether the driver requires front- or all-wheel drive and adapting driving characteristics to suit. In doing so, the new system is able to run more efficiently than the Torsen arrangement, which will continue to be used on more powerful Audi models, including upcoming RS models from the German automaker’s Quattro division.

Mechanical refinements to the latest incarnation of the quattro AWD system are similar to those used on the AWD versions of Audi’s transverse-engine models, including the A1, A3, Q3 and TT models.

They include a new electromechanically operated multiplate clutch mounted on the end of Audi’s 7-speed S-Tronic dual-clutch gearbox. Depending on the model, it consists of between five and seven pairs of clutch plates that rotate in an oil bath. When the plates are pressed together, AWD is activated. Contact pressure between each plate is used to distribute drive between the front and rear axles.

The front multiplate clutch works in combination with a newly developed dog-gear-style rear differential featuring a decoupler operated via a so-called claw clutch. When the decoupler is closed, the propshaft and differential drive to the rear wheels and thus provide AWD.

When running in FWD, the front multiplate clutch disconnects the propshaft. At the same time, a decoupling device within the rear differential opens to reduce friction and associated drag losses.

Unlike the process used by the existing Torsen torque-sensing quattro system, the only RWD components engaged when running in FWD are the bevel gears within the axle and gears within the differential, the latter of which compensate for differences in the wheels’ rotation speed during cornering.

A passive torque vectoring effect is provided to the rear wheels via selective braking activated by sensors in the ABS antilock brakes and electric stability control systems.

The resulting reduction in mechanical drag, along with revisions to the existing S-tronic dual-clutch gearbox, are said to provide prototype versions of the A4 2.0 TFSI quattro ultra with fuel savings of up to 0.13 mpg (0.3 L/100 km) in everyday driving conditions.

To activate AWD, the multiplate clutch closes to operate the propshaft. In doing so, it accelerates the gears in the rear differential. When they are running at a necessary speed, the claw clutch closes via pretensioned springs to provide drive to the rear wheels, at point which an electromagnetically actuated pin disengages a locking lever.