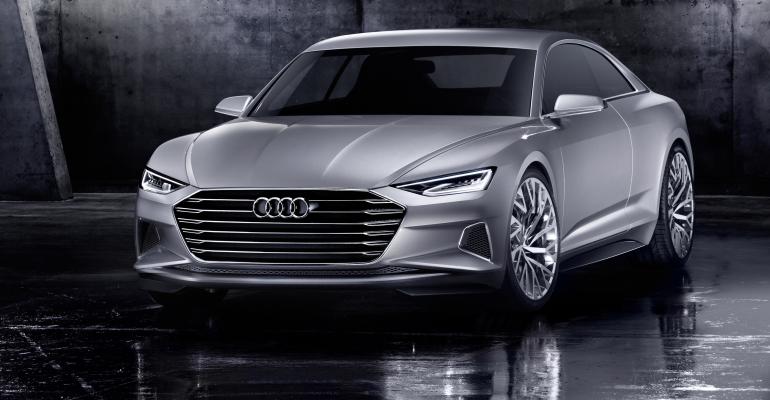 The German luxury-car maker&rsquo;s L.A. Auto Show offerings include a unique all-wheel-drive plug-in fuel-cell vehicle and a new styling exercise that previews a new A9 model and could reintroduce 4-wheel steering to the market.

LOS ANGELES – Audi provides a glimpse into its design and technology futures at the auto show here, as it unveils its Prologue concept that signals a new A9 model at the top of the lineup and rolls out an A7 hydrogen concept that takes fuel-cell technology in a new performance direction.

The Prologue also suggests a revival of 4-wheel steering may be at hand in the luxury sector, after failing to catch on in most markets in the 1980s, when the technology was spearheaded unsuccessfully by Honda and Mazda.

The Prologue is the template for Audi’s new design direction for its A6, A7 and A8 models at the upper end of its car lineup, says Marc Lichte, head of Audi design. But the car also is expected to serve as the basis for the upcoming A9 entry, a more stylish, 2-door companion to the A8.

Exterior design of the Prologue, which is slightly shorter and flatter than the A8 overall, is highlighted by the low shoulder line that creates tension in the sheet metal back to front and provides the car with a ready-to-pounce appearance.

The concept is packed with technology. Across the full width of the instrument panel is a display surface that integrates three touch displays. To the left of the steering wheel, are controls for adjusting lighting and driver-assistance systems. At the right are controls for media. To the far right, the passenger can use the screen to individually select infotainment features.

The system allows a passenger to query the navigation system, for example, then send resulting route directions over to the driver’s side of the screen with a single swipe.

A fourth touchscreen located on the console allows the driver to use handwriting inputs to control the climate system and other features.

The Prologue also features 4-wheel steering, which dials in a small amount of angle at the rear wheels during higher speeds to improve stability and inputs as much as 4-5 degrees in steering angle to make low-speed parking maneuvers easier.

Ulrich Hackenberg, in charge of technology development, tells WardsAuto to expect 4WS to be a “normal technology feature” in luxury cars in the near future.

Also unveiled here is the A7 Sportback h-tron quattro fuel-cell vehicle. Uniquely, the Audi FCEV concept is a plug-in model, that uses the energy stored in its 96-cell, 8.8 kW lithium-ion battery, primarily to boost performance.

“We are outperforming the competition with this car,” Hackenberg says.

The fuel cell has a range of 342 miles (550 km) when its four hydrogen storage tanks are full. It can be refilled in just 3 minutes and its battery can be recharged in just 2 hours. The car can travel about 31 miles (50 km) on battery power alone, if needed.

The fuel cell is comprised of more than 300 individual cells. An electric turbocharger is used to force air into the cells, returning unused hydrogen to the anode, increasing efficiency. Electric motors at each axle are used to provide all-wheel drive.

Hackenberg says Audi won’t put the plug-in FCEV on the market unless there’s a real demand for fuel-cell vehicles – and the necessary hydrogen-fueling infrastructure is in place.

“We won’t do it just for demonstration purposes,” he says, adding it’s still uncertain whether fuel-cell technology or next-generation batteries with longer driving ranges will win out in the electric-vehicle sector.

The concept shows that even if Audi does go to market with a hydrogen car, it intends to do it in a way that will maintain the brand’s performance DNA.