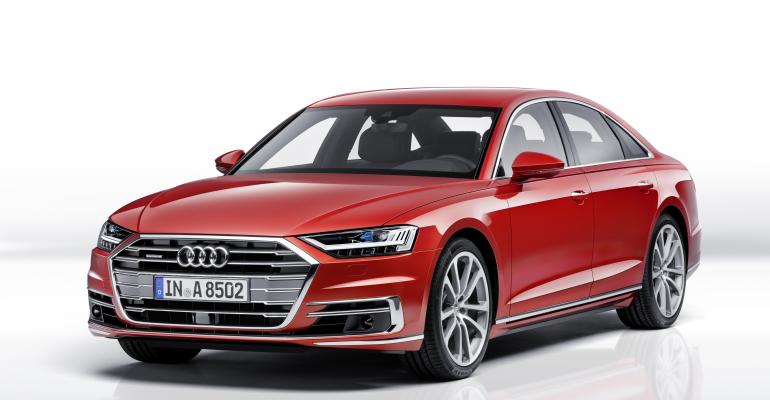 Hailed as the dawning of a new era for the German automaker, the new luxury sedan has been comprehensively re-engineered in a bid to more successfully challenge upmarket rivals such as the BMW 7-Series, Lexus LS and Mercedes-Benz S-Class.

BARCELONA, Spain – The new fourth-generation Audi A8 is unveiled ahead of a planned public premiere at the upcoming Frankfurt auto show and the launch of North American deliveries in 2018.

Hailed as the dawning of a new era for the German automaker, the restyled luxury sedan has been comprehensively re-engineered in a bid to more successfully challenge upmarket rivals such as the BMW 7-Series, Lexus LS and Mercedes-Benz S-Class.

The new A8 features the latest evolution of Audi’s MLB platform and a 48V electrical system that provides the basis for a new hybrid drivetrain offering an electric range of up to 31 miles (50 km) as well as an advanced road-scanning active suspension and contemporary touchscreen control system within a heavily redesigned interior.

The sedan also is claimed to be the first series-production road car to have been developed expressively for what Audi describes as “highly automated driving.”

Among the showcase features available as part of a long list of optional equipment for the new Audi, which goes under the internal codename D5, is a so-called traffic-jam pilot system. Part of an available suite of 41 individual driver-assistant functions, it takes charge of driving in slow moving nose-to-tail traffic up to a speed of 31 mph (50 km/h) on roads where a physical barrier separates the opposing lanes.

As well as relying on cameras, short- and long-range radar and ultrasonic sensors, traffic-jam pilot is the first Level 2 automated driving system to be offered on a production car that employs a laser scanner, which is integrated into the front bumper. Information gathered from each device is processed in a central controller – the key to what Audi describes as permanent merging of data for added autonomous driving precision.

The new system, which is planned for other future Audi models, manages the starting, accelerating, braking and steering functions. But without a legal framework for its operation in many markets, Audi says it will introduce its new autonomous-driving technology step-by-step.

Stylistically, the new A8 follows an evolutionary path with an appearance that blends a number of newly interpreted exterior elements from the earlier Audi Prologue concept car, together with cues from earlier incarnations of the Ingolstadt range-topper.

Up front, a heavily reshaped single-frame grille gains additional width and a more prominent chrome surround to give the sedan an arguably more assertive look than its predecessor. The LED headlamps, with distinctive horizontally mounted hockey stick-shaped daytime running lamps, also are redesigned along the lines of those seen on the Prologue concept and can be ordered with either optional matrix or laser beams.

Further back, Audi designers provide the new A8 with greater structuring along the flanks. There’s a finely wrought shoulder line that extends out of the hood shut line at the base of the A-pillars, a more subtle belt line that intersects the door handles and flowing feature lines above the wheel arches and a deep scallop within the lower section of the doors.

The rounded roofline, a characteristic styling element of the A8 since the appearance of the second-generation model in 1993, remains, as does the 6-window glasshouse treatment and familiar C-pillar shape.

At the rear, the trunk slopes away at a greater angle than today’s A8 and incorporates a subtle spoiler effect within its trailing edge. The OLED taillamps adopt a similar shape and lens graphic to those used by the Prologue and, as on the 2015 concept car, they are connected by a full-width reflector element integrated into the trunklid, giving the new Audi added visual width.

As with the car it replaces, the fourth-generation A8 will be produced at Audi’s Neckarsulm factory in Germany with two different wheelbases, both of which have been extended by 0.2-ins. (5 mm) over those of the third-generation model at 118 ins. (2,997 mm) and 123.1 ins. (3,127 mm), respectively. As with the old model, North America will take only the longer of the two.

The body of the new A8 makes use of more materials than any previous Audi. Together with aluminum, which makes up some 58% of the structure, it also adopts steel, magnesium and carbon fiber. They are joined using 14 different processes.

The use of carbon fiber within the body structure comes after Audi first employed it as part of the weight-saving initiatives for the second-generation R8. It is used within the rear bulkhead and parcel shelf employing a new process developed by Audi and its suppliers. The bulkhead is made using carbon-fiber tape laid together in different directions by machine, impregnated with resin and cured in five minutes. At 57 lbs. (25.9 kg) – some 50% less than the aluminum equivalent, according to Audi – the panel is said to account for only 1% of the total body weight but 33% percent of the overall stiffness.

Despite Audi’s best efforts to shed weight, the new A8’s body-in-white (the bodyshell without the driveline gear and interior) weighs 112 lbs. (50.4 kg) more than the that used by the outgoing model, at 622 lbs. (282 kg) versus 510 lbs. (232 kg).  Audi says the gain is the result of  needing to engineer the structure for greater crash protection in the face of tougher safety legislation in key markets. The upshot is a 24% increase in stiffness over the old structure.

Audi is yet to quote an official curb weight for its new flagship model, though the stiffer body structure, added dimensions and the inclusion of additional sound-deadening material to improve refinement levels is said to have pushed it beyond that of the outgoing A8, which tipped the scales at 4,224 lbs. (1920 kg) in 3.0 TDI guise.

Inside, the new Audi receives a brand-new interior featuring a clean and contemporary-looking dashboard, a redesigned multifunction steering wheel and touchscreen controls closely modeled on those first seen on the Prologue concept car. Rear-seat passengers also get a 1.1-in. (28-MM) increase in knee room and 0.6-in. (15-MM) increase in headroom.

Highlights include new lightweight front seats weighing 8.8 lbs. (4 kg) less than those used in the old A8, 1920x720-pixel high-definition instrument graphics and a revised MMI (multimedia interface) system with two separate displays – one integrated into the middle of the fascia measuring 10.1 ins. (257-mm) in diameter and a second within the front section of the center console measuring 8.6 ins. (218 mm).

There’s also a second-generation MIB (modular infotainment system) that uses a quad core processor from NVIDIA and is claimed to be 50 times faster than the first-generation unit. It forms part of an extensive list of options that also includes a head-up display, a revised Bang & Olufsen sound system, conversational voice control and a self-learning navigation system that is claimed to provide greater accuracy than existing digital-mapping systems.

The A8 will be built with two turbocharged V-6 engines from the outset of production in October. Included is a turbocharged 3.0L direct-injection gasoline unit developing 335 hp in the entry level 3.0 TFSI and a turbocharged 3.0L V-6 common-rail diesel engine delivering 264 hp, 10 hp over the car it replaces.

As with all drivelines planned for the new Audi, both of the initial engines are allied with a new 48V electrical system that offers a range of mild-hybrid functions, including engine-off coasting, extended start/stop operation and kinetic energy recuperation under braking via a belt-driven alternator. Also among the standard features is an 8-speed torque converter automatic gearbox and quattro all-wheel drive, the latter of which can be ordered with an optional sport differential.

Crowning the lineup is the W12, which comes exclusively in long-wheelbase guise. It runs a revised version of Volkswagen Group’s uniquely configured W12 direct-injection gasoline engine boasting a 0.3L reduction in capacity over its predecessor at 6.0L. Despite the downsizing in capacity, the newer engine’s reserves are up by a considerable 85 hp at 585 hp.

Also planned, though not expected to see showrooms until this time next year, is the L e-tron. It runs the turbocharged 3.0L V-6 from the 3.0L TFSI in combination with an electric motor mounted within the bell housing of the automatic transmission to provide an overall system output of 443 hp together with a stout 516 lb.-ft. (700 Nm) of torque.

Full details of the new hybrid A8 are yet to be revealed, although Audi claims an electric range of up to 31 miles (50 km) and says it plans to offer the new model with an optional inductive charging system that operates at 3.6 kW for wireless recharging of the 14.1-kWh lithium-ion battery, which resides within the floor of the trunk. Alternatively, the battery, which consists of 104 individual cells, can be charged using a standard plug-in cable at either 3.6 or 7.2 kW, the latter capable of providing an 80% state of charge within two hours, Audi says.

Details pertaining to the models planned for the North American A8 lineup are yet to be divulged. Audi suggests they will include the 3.0 TFSI, 4.0 TFSI, W12 and L e-tron, although not all are expected to be available from the outset.

Also planned for the U.S. is a yet-to-be-confirmed successor to the S8 running a powered-up version of the turbocharged 4.0L TFSI unit developing 542 hp. The same engine is used by Audi’s VW Group sister company Porsche in the latest Panamera Turbo.

In an effort to improve the refinement of its range-topping sedan, Audi has mounted all engines except for the entry-level turbocharged 3.0L V-6 gasoline unit on dynamic mounts to absorb vibration and suppress load change. The three gasoline engines also receive an active noise-cancellation function as offered in today’s A8.

Underpinning the new Audi is a newly configured, aluminum-intensive suspension featuring a combination of double wishbones up front and a 5-link arrangement at the rear. It comes as standard with hydraulically operated air springs offering four different levels of ride height.

Depending on the model, the new A8 also can be specified with a new active suspension that Audi is touting as the most advanced ever to be applied to a series-production car. Similar to the magic body control system offered by Mercedes-Benz on the S-Class, it uses cameras mounted within the windshield to scan the road 18 times per second and then alters the damping and spring characteristics via electric actuators within the spring towers on each individual wheel. In combination with a so-called pre-sense 360-degree system, it can raise the body when an impending lateral collision is detected in a move Audi claims reduces the potential for occupant injuries.

A further development is the appearance of all-wheel steering on select models. Already used by BMW on the latest 7-Series, it aims to heighten the responsive and overall dynamic character of the A8; the rear wheels turn in the opposite direction as those at the front at lower speeds for improved maneuverability, and in the same direction for improved stability at higher speeds.

Together with the traffic-jam pilot, the suite of artificial-intelligence autonomous-driving functions available for the new A8 includes a so-called remote parking pilot and remote garage pilot. Operable from outside the car via a smartphone application, they allow the driver to monitor parking maneuvers.