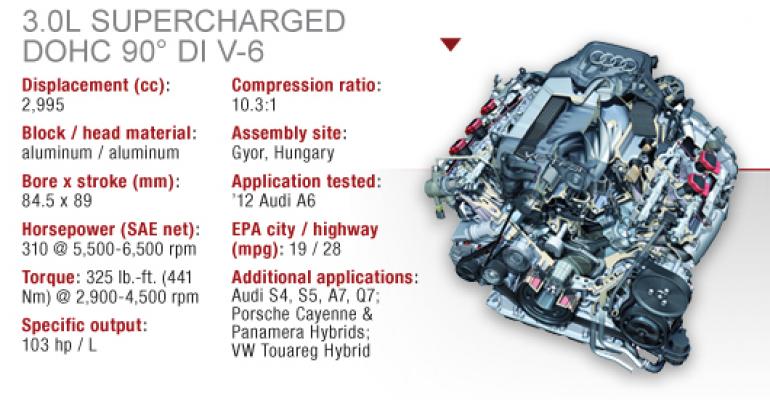 In sophisticated autobahn burners like the S4 and A6, the 3.0L TFSI makes V-8s seem obsolete.

It’s not easy to stay on the Ward’s 10 Best Engines list. Each year we challenge a returning candidate in a different way and question whether it still is a benchmark.

For the third year in a row, Audi’s TFSI supercharged 3.0L V-6 has answered that question and continues to impress with stunning power, refinement and efficiency.

That’s because the engine still makes a prodigious 325 lb.-ft. (441 Nm) of torque available from 2,900 to 4,500 rpm. It delivers breathtakingly powerful acceleration when asked, yet remains supremely polished.

Once upon a time, nothing with fewer cylinders could match a V-8 in low-end torque unless it was a diesel.

Today, it is clear forced induction and gasoline direct injection can enable V-6s to beat larger displacement V-8s at their own game, delivering stump-pulling torque at lower engine speeds while offering superior fuel efficiency. In sophisticated autobahn burners like the S4 and A6, the 3.0L TFSI makes V-8s seem obsolete.

In addition to performance, the Audi V-6 sets the bar high in other areas as well. It demonstrates that supercharging still can compete with turbocharging as an induction strategy for mainstream vehicles (in addition to over-the-top performance models), and it shows that even a somewhat exotic engine can be flexible. It not only powers the S4 and A6, but the larger A7 5-door sedan and Q7 cross/utility vehicle.

The engine also is used in other brands belonging to Volkswagen, Audi’s parent, including versions of the VW Touareg, Porsche Cayenne and Panamera Hybrid.

With such a resume, this masterpiece of motivation had no trouble making the 2012 list. It will be interesting to see if it has such an easy time next year.