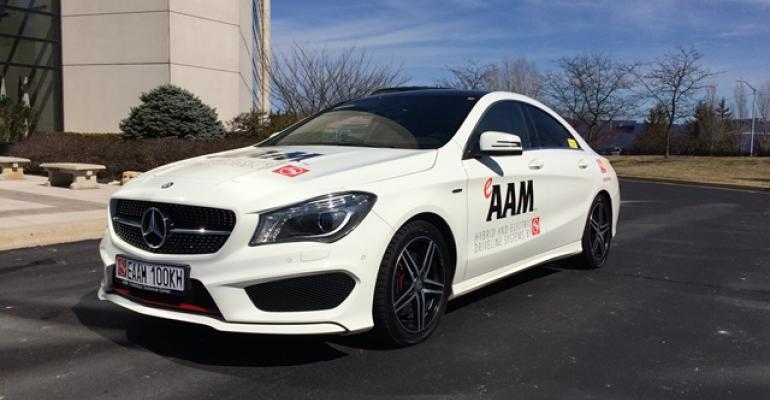 American Axle, a longtime producer of rear axles for trucks, is reinventing itself as a developer and builder of highly efficient and electric drivelines for rear-, front- and all-wheel-drive applications.

Dubbed Quantum, AAM has been developing its new driveline technology for three years, with demonstrations conducted around the globe for automakers interested in the components, says Phil Guys, vice president and chief technology officer.

In a heavy-duty pickup, for instance, the advanced driveline cuts weight at least 100 lbs. (45 kg) while being more efficient and without any loss of performance, Guys says. Quantum components can be expected to deliver 1%-1.5% improvements in fuel economy, the company says. AAM is developing Quantum applications for rear- and all-wheel-drive vehicles.

Although none of the Quantum technology is in production at the moment, AAM President Michael Simonte says all major automakers have expressed interest in Quantum products. The company has three “cooperation” pilot projects in the works.

“American Axle anticipates all of our drive axles will migrate to Quantum over the next five years,” Simonte says. “This is a radical change from the way axles have been produced in the past.”

AAM also is readying its second-generation EcoTrac disconnecting AWD system. Introduced in 2015 on the Jeep Cherokee CUV, the system completely disconnects the rear-drive unit, reducing 80% of the parasitic loss. The next-generation version due later this year is expected to eliminate 90% of that loss. In addition to FCA, General Motors and Ford likely are customers for EcoTrac.

Hybrid and electric drivelines represent another major growth area for AAM. The company is developing an electric rear-drive unit capable of a 30% improvement in fuel efficiency and a like reduction in carbon-dioxide emissions. The unit is applicable to multiple vehicle platforms including cars and CUVs.

AAM’s e-Boost electric drive is scheduled to appear on a high-performance AWD hybrid from a premium European manufacturer early next year, company officials confirm. Powered by a lithium-ion battery, the power-dense drive motors on each axle develop 201 hp and a whopping 2,323-lb.-ft. (3,150 Nm) peak torque.

Overall, AAM is on track to completely reinvent itself from a maker of stand-alone rear-drive axles to a global company capable of providing drivetrain components for rear-, front- and all-wheel-drive applications, Simonte says. Sales reached nearly $4 billion in 2016, up from $1.5 billion at the company’s lowest point prior to diversifying its portfolio, he notes.