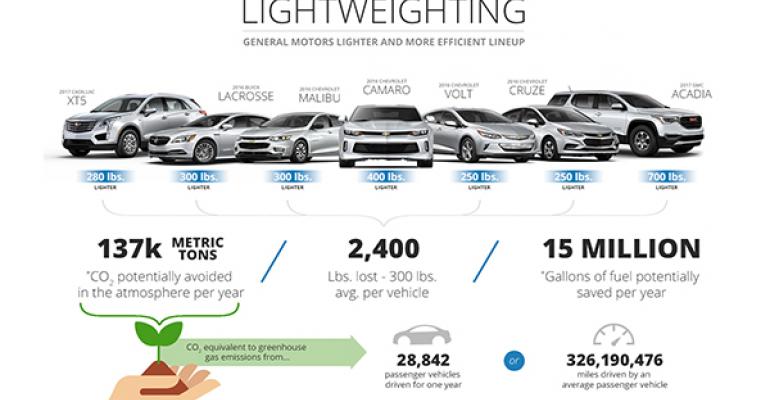 In the initial aluminum-to-steel production program, GM will be moving cautiously, replacing only a couple of the rivets currently used to test the manufacturing process and prove part durability before moving on to more extensive applications.

WARREN, MI – General Motors is just weeks away from beginning production validation of a new process for joining aluminum and steel parts that will help cut vehicle weight while simplifying manufacturing and lowering tooling costs in its factories, executives say.

The automaker developed the process in-house and says it solves the problem of joining the two disparate metals through spot welding, a hurdle due in large part to the widely different melting points of aluminum and steel.

GM announced earlier it would begin using the process this year in production of the Cadillac CT6 sedan, and officials at a backgrounder here on the company’s extensive efforts to take weight out of its cars and trucks say they are finally close to startup at the Hamtramck, MI, assembly plant, where the technology will be employed first for seatback construction, followed closely by hoods.

The aluminum-to-steel spot-welding system makes use of a uniquely designed welding tip patented by GM. However, the tip fits with conventional tooling, so there is no need for specialized welding equipment. GM is expected to make the process available to other automakers interested in licensing the technology.

The process is the next step in the manufacturing evolution that saw aluminum-to-aluminum welding capability, introduced around 2008, reach widespread application in today’s factories. GM is hoping it can exceed the pace of that 8-year ramp-up when it comes to proliferating the aluminum-to-steel welding technology.

The automaker says the welding process allows it to eliminate rivets used to join aluminum and steel body parts, cutting costs and mass. With aluminum-to-aluminum welding, cost savings in rivets alone are estimated at $5-$100 per vehicle, depending on the number used, with weight savings of 0.7-11 lbs. (0.3-5 kg) per vehicle. Manufacturing costs also are lower, the automaker says.

In the initial aluminum-to-steel program for seatbacks, GM will move cautiously, replacing a couple of the rivets currently used with the advanced spot welds to test the manufacturing process and prove part durability before moving on to more extensive applications.

The welding technology is just one of the things GM is focused on in an effort to cut vehicle weight to meet toughening fuel-economy and tailpipe emissions standards, as well as to improve vehicle performance.

The automaker says in tests so far, the wheels have performed well, but it is working with the supplier to change the design to make them even lighter and stiffer. The current prototypes trim about 8.8 lbs. (4 kg) off each wheel.

“We want them to be a performance differentiator,” William R. Rodgers, Light Polymer Systems Technical Fellow-R&D, says of the push to advance the design further.

Timing is unclear, but GM says costs should come down as production increases, meaning carbon-fiber wheels could have wider application as a fuel-economy initiative in the future.

The automaker also shows off a large prototype underbody made of structural composite and door and decklid inners made of blow-formed magnesium sheet. Both cut mass considerably – 30% in the case of the underbody – and consolidate a number of parts, but cost so far has limited the use of those materials.

Lessons learned from the underbody project aided the development of the Chevrolet Spark EV’s composite battery enclosure. And GM did experiment with magnesium decklids on the Cadillac SLS sedan built in China, but that car (an extended-wheelbase XTS) has gone out of production.

The SLS decklid performed well, says Anil K. Sachdev, Light Metals Systems Lab Group Manager-R&D, but so far there hasn’t been a solid business case to bring magnesium into wider use for the body-in-white.

“We’re always looking for ways to bring that cost down,” he says.

GM is making extensive use of computer-aided engineering technology to make sure its bodies-in-white employ materials in a way that maximizes weight savings and structural rigidity, Klein says, noting the automaker put in 50 million CAE computational hours in designing the sophisticated CT6 body that combines 11 different materials.

In trimming 300 lbs. (136 kg) off the new Malibu, GM uses seven different types of steels for the body.

Report Says Automakers Finding It Easier to Be Green
Mar 29, 2016