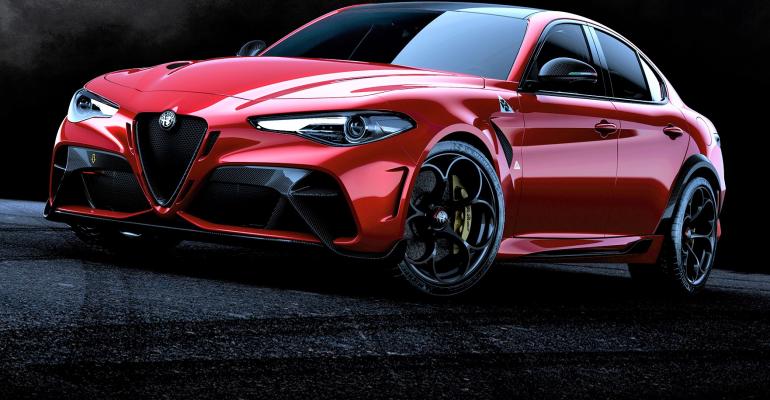 The limited-production 4-door receives a series of mechanical upgrades over the existing Giulia Quadrifoglio, including a 21-hp lift in output to make the Giulia GTA the most powerful production Alfa Romeo model yet.

Alfa Romeo resurrects the evocative GTA name for a 533-hp range-topping version of its Giulia sedan.

Unveiled in a series of official images in place of an unveiling at the cancelled 2020 Geneva auto show, the limited-production 4-door receives a series of mechanical upgrades over the existing Giulia Quadrifoglio, including a 21-hp lift in output to make the Giulia GTA the most powerful production Alfa Romeo model yet.

The GTA nameplate, an acronym for the words Gran Turismo Alleggerita (Alleggerita being the Italian term for “lightened”), denotes the new Alfa Romeo’s lightweight construction and heady performance potential.

The Giulia GTA is powered by the same twin-turbocharged 2.9L gasoline V-6 as the Giulia Quadrifoglio. But a new engine management system and modifications to its titanium Akrapovic exhaust system help raise its output from 503 hp to 533 hp. They’re also claimed to provide it with a more sonorous exhaust note. The increased reserves are channeled through a standard 8-speed torque converter-equipped automatic gearbox to the rear wheels.

Official performance figures are yet to be revealed, but Alfa Romeo hints the new Giulia GTA will eclipse the Giulia Quadrifoglio’s 0-62-mph (97-km/h) time of 3.9 seconds and 191-mph (308-km/h) top speed. 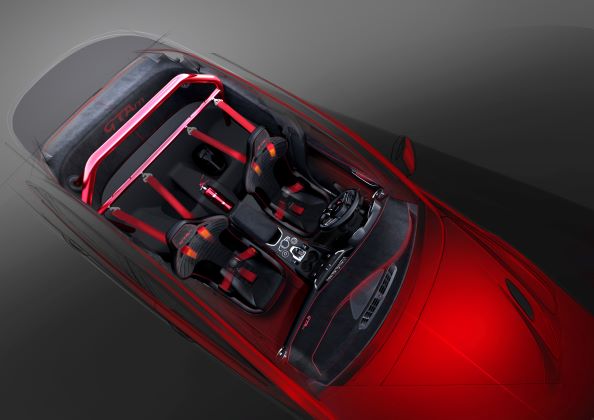 In addition to the engine tweaks, the new Alfa Romeo model also benefits from a series of weight-saving measures that are claimed to help shave 220 lbs. (100 kg) off its curb weight. Included is a front bumper, front fenders, hood, roof and driveshaft made from carbon fiber. Aluminum and plastic composite materials feature elsewhere.

Visual differences from the Giulia Quadrifoglio include a reworked aerodynamic package with a larger front splitter element within a restyled front bumper as well as a carbon-fiber rear wing and diffuser. There also are uniquely styled 20-in. center lock wheels.

In a move that’s claimed to heighten its dynamic qualities, the Giulia GTA adopts a heavily revised suspension featuring a 2-in. (50-mm) wider track at both the front and rear.

Alongside regular road-going versions, the new Alfa Romeo will be sold in hardcore track-focused guise, with the rear seats making way for a roll cage (above, left). Called the GTAm, it remains road-legal under European law but swaps its front seats for race items with carbon-fiber bases and 6-point harnesses. An enhanced aerodynamic package provides greater downforce.

The historic GTA name first appeared on a racing version of the 1965 Giulia Sprint, which used an aluminum body for a weight of just 1,642 lbs. (745 kg).