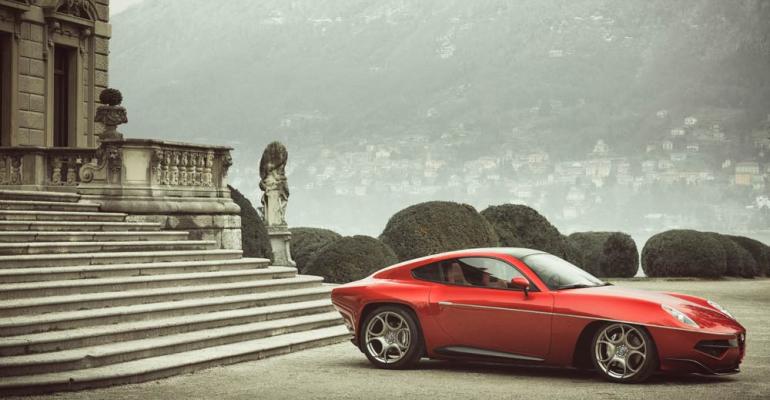 The Italian luxury brand continues to win awards for its designs, but enthusiasts continue to fret over its future.

CERNOBBIO, Italy – Alfa Romeo car sales continue to decline throughout Europe, having dropped from 201,000 units in 2001 in the 15 countries forming the European Union at the time to just 89,900 last year in the region’s now 27 markets.

Yet, Alfa Romeo’s allure is confirmed by another design award, this one from attendees of the Concorso d’Eleganza at Villa d’Este, the most glamorous event for car connoisseurs on this side of the Atlantic and a must for top collectors and automobile enthusiasts from around the world.

The modern Alfa Romeo Disco Volante, designed and built by reborn styling house Carrozzeria Touring Superleggera from one of the 500 Alfa Romeo 8 C coupes produced, is voted best in show by those crowding the gardens of Villa d’Erba during the weekend-long event held on the shores of Lake Como.

Alfa Romeos are by far the most award-winning cars at the Italian Concorso and at most other such major events worldwide, including the Goodwood Festival of Speed in the U.K. and the Concours d’Elegance in Pebble Beach, CA.

This time, the Disco Volante was confronted with strong rivals, including the Ferrari-Pininfarina Sergio, Aston Martin CC100, McLaren P1 and Infiniti Emerg-E. The stunning BMW Pininfarina GranLusso Coupe was not eligible according to rules set down by BMW, the event’s organizer.

The new prize confirms the great passion that survives among car enthusiasts for the marque, despite Alfa Romeo’s limited model range and declining worldwide sales.

Brand enthusiasts here and elsewhere express disappointment and concern about the absence of new offerings on the horizon.

In a recent editorial, Quattroruote, Italy’s top motoring magazine, laments yet another delay in plans to launch a new Alfa Romeo flagship that would share its platform with the new Maserati Ghibli, saying those who have seen the car believe the styling is outstanding and that it would be a clear winner in the market.

The upcoming flagship will be powered by the new V-6 engine built by Ferrari for the Ghibli. Though it is widely known the new V-6 shares its block with Chrysler’s Pentastar engine, Fiat officials have been reluctant to admit it publicly.

In theory, the new Alfa Romeo is scheduled for launch in 2014, and Quattroruote says it still could arrive on time, though insiders worry quality would be impacted if development were rushed to meet that schedule.

Many industry-watchers believe all Alfa Romeo plans are on hold until Fiat can complete its acquisition of Chrysler in the U.S. Press reports indicate Fiat CEO Sergio Marchionne is lining up $10 billion in financing with an eye toward requiring the remaining shares in the U.S. auto maker by the end of summer.

An industry insider, who asked not to be quoted, says decisions regarding Alfa Romeo’s future go far beyond the public’s passion for the brand.

“(It is) the entire Italian automotive industry that is at stake,” he says. “It is now obvious that the Fiat Group has not the resources, be it financial or human, to regain the time and market share that have been lost in the past decades.

“The big Alfa will need to be significantly simpler and cheaper than the Maserati to sell in bigger numbers and avoid cannibalization,” he adds. “How this can be done successfully and profitably is hard to figure.”

To reestablish Alfa Romeo among the premium brands, Fiat will need at least a decade of slow and steady growth and several billion euros.

Superlative design may be enough for the new flagship model’s first year on the market, but the car will have to demonstrate impeccable quality and reliability longer-term to gain ground. Dealers worldwide will have to offer superlative service and have enough confidence in the brand’s future to make required investments.

More money will be needed for marketing and additional product development.

Among the many enthusiasts here at Villa D’Este is Axel Marx, a Swiss collector renowned for his large garages filled with Alfa Romeos, who expresses surprising views on whether Fiat should sell the brand to Volkswagen Group, a potential option that continues to spawn rumors.

Alfa Romeo has no future under Fiat and should be sold to VW without delay, Marx says, adding if that happens he will gather his friends for a champagne toast to celebrate the brand’s expected renaissance.

Asked if a sale to Toyota also would be preferable to Fiat ownership, he says, “Perhaps, but (only) as a second option.”