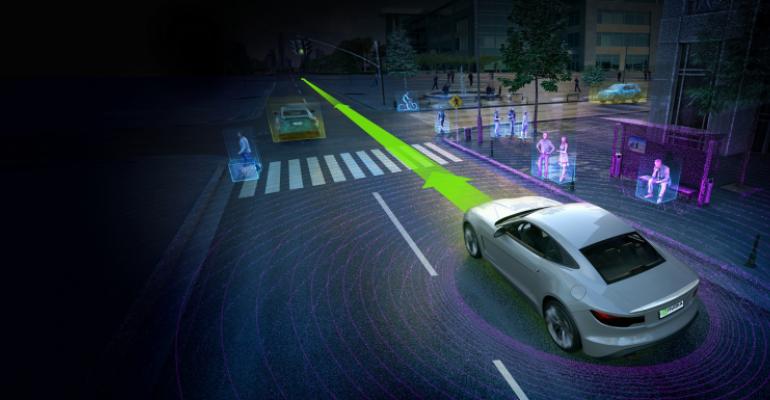 <p><strong>Nvidia&rsquo;s DRIVE PX 2 Artificial Intelligence platform can understand in real-time what&rsquo;s happening around the vehicle, locate itself on an HD map and plan a safe route.</strong></p>
Technology

A developer can&rsquo;t write enough rules for the car to react to all the situations a human must react to. So AImotive created a virtual small car with a laser system that allows it to drive, steer and brake, all the while receiving positive and negative feedback.&nbsp;&nbsp;

Arshia Gratiot is a founder of Third Space Auto, which is creating software that allows your car to learn who “you” are.

She used to work for mobile-phone maker Nokia, where the first thing staffers would say to a customer was, “So tell me about you.” That helped determine what kind of phone the customer needed, Gratiot says.

Nokia also spent a lot of time simplifying phones so users easily could access all of their technological features. “Automakers don’t do that with cars,” she tells WardsAuto.

That will change in the car of the future because of artificial intelligence. Your car will know you better than your iPhone knows you, and using the technology will be more intuitive.

AI in automobiles is in its infancy but is growing up fast. As it matures, AI will have an enormous impact on how cars are produced and sold.

AI and deep learning “will truly transform the automotive market,” says Danny Shapiro, senior director-automotive at Nvidia, a designer of computer chips and related products for several industries, including automotive.

Artificial intelligence stems from the development of computer systems that can perform tasks that generally require human intelligence, such as visual perception and decision-making.  Deep learning allows AI to develop by endlessly repeating tasks until something is “learned.”

In manufacturing, AI will streamline the process by doing everything from managing inventories and materials to detecting problems along the line, Shapiro says. Automakers will use AI to test new chassis and structural layouts, and try out new designs that were previously thought impossible to implement, he says.

“The development process for cars is changing from mechanical to electronic systems to fully computerized and programmable systems,” Shapiro says. “The car is now software-defined.”

How cars are driven also will be revolutionized by AI, he says, because of its role in operating fully autonomous vehicles.

Ian Beavis, chief strategy officer at marketing and advertising firm AMCI, agrees. True autonomous driving – so-called Level 5, where no human interaction is needed – will be realized through AI, he tells WardsAuto on the floor of the recent Automoblity LA, the new name for the Los Angeles auto show.

“AI means everything for autonomous driving,” says Beavis.  “Without AI and machine learning, you can’t put vehicles in unknown environments. It allows autonomy to run free.”

Software will make that possible. AImotive is a startup providing AI technology to automakers. (Nvidia is an investor in AImotive).

Learning to Do Stuff

A developer can’t write enough rules for the car to react to all the situations a human can react to, he says. So AImotive created a virtual small car with a laser system that allows it to drive, steer and brake, all the while being given positive and negative feedback.

Millions of tries later, it starts to drive faster. “It gains confidence,” he says.

While cars equipped with AI may gain confidence after such exhaustive testing, dealers will need to learn to sell the concept of AI much more quickly. They are the critical link in consumer acceptance of the technology, says Third Space Auto’s Gratiot.

“The dealer network is absolutely critical,” she says. “They are the frontline to the customer.”

Dealership employees must explain AI to customers and train them in its usage. That will require customizing the sales experience for each customer, she says.

“AI creates a ʽwow,ʼ” says Gratiot. “The dealer will need to sell the brand’s ʽwow.ʼ”

Automakers will need to simplify AI and make it intuitive to close the sale. But  consumers don’t use much of the technology in today’s vehicles, research firm J.D. Power said in its 2015 Driver Interactive Vehicle Experience Report, which measures owner experiences with in-vehicle technology features during the first 90 days of ownership.

At least 20% of owners didn’t use 16 of the 33 technology features offered, the report says. For many, they either didn’t know how to use the technology or in some cases didn’t know it existed.

With AI and deep learning, that training process will be neverending for manufacturers and dealers alike.

The technology changes so rapidly that the software never is complete, Shapiro says. Automakers, like smartphone manufacturers, will need to continue developing innovative software that allows cars to get smarter over time, he says.

“Carmakers will continue to need to differentiate and innovate, but will be able to do so at a faster pace, and without having to completely replace platforms,” he says. “They can do it by using deep learning to teach vehicles to do more even after they have left the dealership.”