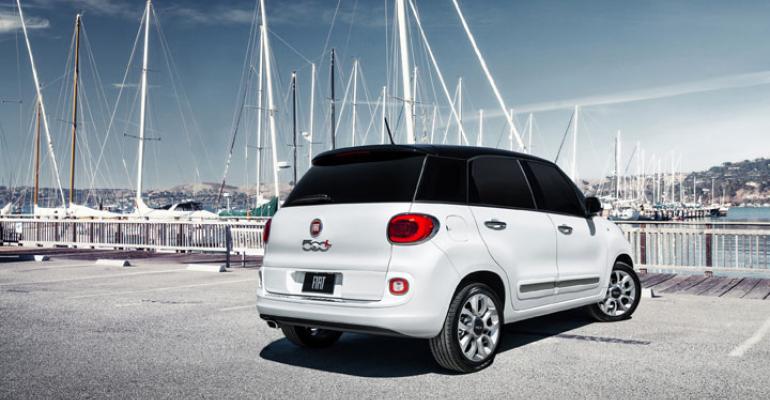 Fiat will offer 13 versions of the 500 subcompact by next year, including the B-segement 500L, which targets a family car buyer looking for legroom.

LOS ANGELES – Fiat’s drive into North America continues with the introduction of the ’13 500L and two more variants of the subcompact at the auto show here.

The ’13 500 electric vehicle made its public debut this month at a televised music awards show, though its pending retail introduction has been met with resistance from CEO Sergio Marchionne who has said the auto maker cannot make money on EVs.

Fiat executives told reporters at Chrysler’s headquarters in Auburn Hills, MI, last week that they are confident the battery-electric vehicle will swipe market share from the Nissan Leaf.

Called the 500e, the zero-emissions, front-wheel-drive EV has an estimated range of 80 miles (129 km) in city driving and 100 miles (161 km) on the highway. The car arrives in U.S. dealerships in second-quarter 2013, with an initial rollout in California.

“Anything that works in California first works in the rest of the country,” Fiat Brand President Tim Kuniskis says, highlighting the industry trend to release EVs in the emissions-conscious state.

Pricing has not been announced, though executives assure it will be competitive.

With the Leaf clearly in its sights, Fiat is banking on the growing familiarity of the 500 to attract customers who aren’t familiar with electric vehicles.

The auto maker, for now, is staying away from light blues and greens for the 500e, which are common body and trim colors for EVs and hybrids. Instead, it will focus on a variety of interior and exterior combinations centered on brilliant orange, black, grey and white. Designers say they were looking for a 1960s’ pop aesthetic, “like Brigitte Bardot,” one says.

Charging time is estimated at less than 24 hours on a 120V connection or less than four hours using 240V. Range will be consistent regardless of weather conditions, designers and engineers say. Energy will be recaptured in the battery with any kind of driving behavior, mostly through the regenerative brake system.

Aerodynamics also play into boosting range, with new sills, wheel designs, modified rear and front fascias and rear spoiler atypical of a non-electrified 500. The liquid-cooled, lithium-ion battery is mounted under the center of the vehicle in order to shift the center of gravity and reduce body roll.

The 500e was completely developed in Auburn Hills, making it the first Fiat-branded vehicle to be conceived in the U.S. There are no plans to sell the car in Europe.

Building on the name recognition of the 500, the 500L comes here from overseas in mid-2013 as a ’14 model. It will be Chrysler’s only North American entry in the B-segment upon arrival.

Targeting Mini Countryman and Kia Soul buyers, the 500L is powered by Fiat’s 1.4L Multi-Air Turbo, currently available in the Dodge Dart and premium 500 Abarth. Two versions of the 500L, a base model and a Jeep-esque “Trekking” version, will be the first variants sold in North America.

Executives say a similar strategy of multiple trim levels and price points used with the 500 subcompact also will be employed with the 500L. Produced in Serbia, it is the only vehicle built on Fiat’s Y-platform. Additionally, the 500L will be the first Fiat-branded vehicle to offer Chrysler’s UConnect wireless infotainment system.

Fiat Product Marketing Manager Mike Davis says he is not worried about the 500L swiping sales from the smaller 500 or Chrysler’s sole C-segment entry, the Dart. The 500L should capture family oriented drivers looking for more room in the back seat, he says.

“The Chrysler group and Fiat are totally different customers,” he tells WardsAuto. “Ninety percent of (current Fiat drivers) don’t have children. There’ll be changes in lifestyle, but they love the Fiat brand and the way it drives. We want to make (the 500L) a mainstream approach to the Fiat brand.”

For 2013, the Fiat 500 Abarth receives a cabrio version that arrives in the first quarter. As with the 500L, the Abarth model is powered by the 1.4L Multi-Air Turbo. The new model should keep interest in Fiat growing and attract more Mini buyers, Kuniskis says.

Including the 500e and the Abarth Cabrio, there will be 13 variations of the 500 on the market by next year.

“Look at Mini, 12 years since they came into the market and six years before they came with another car,” he says. Fiat is re-entering negotiations with the luxury clothier Gucci to possibly produce another special-edition 500.

With 183 dealerships, which Fiat refers to as studios, Kuniskis says there still is room to grow, but “we’re at critical mass” when it comes to getting the word out about Fiat across America. Fiat still is missing in key markets such as San Francisco and Nashville, TN.

While Chrysler continues to bring new powertrain technology to the market, including the electrified 500 and compressed-natural-gas Ram 2500, Kuniskis says a CNG-powered Fiat, which is popular in Europe, won’t be seen in the U.S. anytime soon.

“We don’t see the demand to justify the technology,” he says, noting he prefers diesel. “I love the marketing claims you get from diesel.”