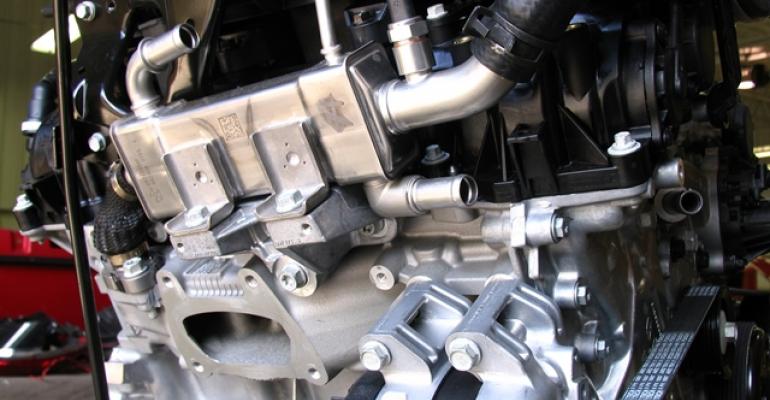 Without 2-step variable valve lift, the &rsquo;15 version of the Pentastar always operated in high-lift mode, consuming more fuel. FCA says the new system results in less overall pumping work, singlehandedly accounting for a fuel-economy gain of up to 2.7%.

Most of the DOHC engines displace 3.6L, but a smaller 3.2L has been offered the past few years in the Jeep Cherokee, and a 3.0L version is available in China.

The Pentastar is a workhorse, having singlehandedly replaced seven sorely outdated engines within the FCA portfolio, powering everything from minivans, pickups and all-wheel-drive utility vehicles to cargo trucks, front-wheel-drive family sedans and rear-wheel-drive coupes. Sixteen FCA vehicles currently use the Pentastar.

That explains why the program to improve the engine, which began more than two years ago, has been a top priority in Auburn Hills, MI.

Output ramps up slightly, from 290 hp to 295 hp, but the real gain comes in torque – particularly at the low end, where customers will notice it readily, Gorgas says.

Most of that additional punch will be noticeable below engine speeds of 3,000 rpm, Gorgas says.

The upgraded Pentastar, with an integrated exhaust manifold, now breathes better, thanks to the integration for the first time of 2-step variable valve lift, which requires new 3-lobe camshafts on the intake side.

When the driver demands more power, the switch to high-lift mode is seamless, allowing more air and fuel into the combustion chamber. “Transitions are literally undetectable,” Gorgas says.

Without VVL, the ’15 version of the Pentastar always operated in high-lift mode, consuming more fuel. FCA says the new system results in less overall pumping work, singlehandedly accounting for a fuel-economy gain of up to 2.7%.

The previous Pentastar had variable valve timing. For ’16, the technology moves to torque-driven cam phasing to reduce oil demand.

The new VVT system, still limited to the intake side, also increases its range of authority from 50 degrees to 70 degrees, helping mitigate knock during hot starts and expanding the operating envelope of Engine Stop/Start.

ESS was available on the previous Pentastar in the Ram pickup and now will be standard on the new Grand Cherokee.

The addition of cooled EGR and 2-step VVL results in 13 lbs. (5.9 kg) of additional hardware. But overall the Grand Cherokee engine is 2 lbs. (0.9 kg) heavier than the previous Pentastar, thanks to other efforts to reduce weight and friction.

Fully dressed with fluids, the new engine tips the scales at 332 lbs. (151 kg), Gorgas says. In some applications, the Pentastar will weigh as little as 326 lbs. (148 kg). The block and heads continue to be made from aluminum, and the block incorporates cast-in-place iron liners.

Altogether, the new technologies and efforts to reduce weight should translate into fuel- efficiency gains of up to 6%, depending on application, Gorgas says.

On the packaging front, the new engine needed to be the same size so it could fit into existing vehicles or those being slightly refreshed, Gorgas says.

“We can’t come up with a brand new widget that doesn’t fit into all these vehicles again,” he says. “As we went through this exercise, we literally took every single part, pulled it apart and questioned ourselves time and time again: What do we need to do to be best-in-class on this?”

Gorgas says no stone went unturned, as the team even studied the dimensional needs for the vibration damper bolt.

Ribs on the block were studied. “Do they really need to be that thick? Do they need to stand out that far?” Gorgas says. “It was that kind of detail.”

Other changes include a 2-stage oil pump that has been refined to reduce parasitic losses and a higher compression ratio of 11.3:1, up from 10.2:1. The intake manifold is all-new, with longer runners to boost torque.

Helping reduce friction is HG-R1, a new type of plastic used on the timing drive guide-faces. FCA says the upgraded Pentastar is the first production engine to employ the low-friction material. Bore and stroke are unchanged, at 96 x 83 mm.

Bob Lee, FCA’s head of global powertrain coordination, praises the team for meeting its goals without needing to spend lots of money.

“This engine is used in 1.3 million of our vehicles every year,” Lee says. “There are lots of bells and whistles that could have been added, but (the goal was) getting a 6% fuel-economy gain for very minimal change in cost to the program.”

Likewise, Lee is impressed the team could achieve its objectives with a naturally aspirated 6-cyl. engine while many rivals are opting for 4-cyl. boosted powerplants.

“This is why we think this is a solution that is just as impressive as what some of those other guys have done,” he says.

The new Pentastar will continue running on regular unleaded gasoline and use conventional port fuel injection, but the injectors now use 8-hole nozzles (instead of four in the past) for improved atomization and spray targeting, Gorgas says.

The Pentastar engine began production in Saltillo, Mexico, and Trenton, MI, but its popularity forced the automaker to add capacity at two other plants – Mack Avenue in Detroit and Trenton North.