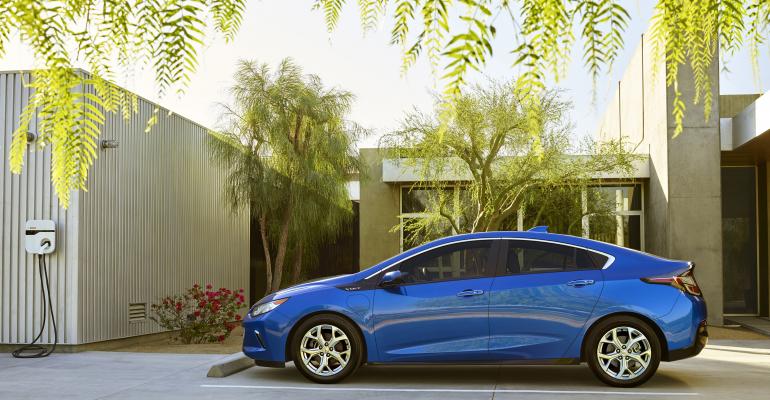 “Our instructions were simple,” says Pam Fletcher, executive chief engineer for the Volt. “Give people more of what they like best.”

Greater all-electric range, Fletcher says, was the No.1 request of Volt owners, easily the most studied and surveyed owner group in industry history. Fletcher jokingly underscores owner demands for more range by calling it the No.1, No.2 and No.3 top request.

“This is probably the most customer-inspired car you’ve seen launched in recent history,” Fletcher says during a sneak preview of the ’16 Volt here a few days prior to its public debut at the North American International Auto Show.

An all-new propulsion system provides the performance upgrades. In addition to a larger displacement range-extender, which permits lower engine speeds for greater refinement, the Volt’s lithium-ion battery pack grows in size to 18.4 kWh from 17.1 kWh currently. Cell energy of the pack jumps 20% despite using 96 fewer cells (192 vs. 288).

The battery system also sheds 20 lbs. (9 kg), boasts a better thermal management system and a simplified web of software controls to help reduce cost. Recharging still takes about 4.5 hours from a 240V connection, while recharging from a 120V line takes longer due to the larger battery at 13 hours.

New lightweight materials, such as an aluminum hood and rear liftgate, help improve range further. But they also enhance the next-gen Volt’s nimbleness, as does a new braking system with better feel and a redesigned steering system with greater responsiveness.

The tighter-fitting liftgate, along with items such as a new “shark-fin” antenna housing and updated Michelin tires, reduces cabin noise appreciably.

“Quietness,” declares Volt Chief Engineer Andrew Farah. “That, to me, will be the crowning touch.”

The Volt also gains seating for a third second-row passenger, although that person’s legs must straddle the battery tunnel similar to the driveline tunnel of a rear-wheel-drive vehicle. A center headrest is not included.

“You don’t want to go cross-country,” Farah admits of the center-rear position, but it was another major request from current owners.

GM designers punched up the exterior design of the new Volt, trying to strike a balance between some of the car’s iconic cues and creating a more mainstream look.

The grille, for example, remains closed just as it is on the first-gen car, but it is a more stylish and contemporary execution with higher-grade materials. The rear fascia receives more pronounced taillamps that also serve as a portion of the integrated rear spoiler.

“I think of the Volt as a performance car,” says Cafaro, who came to the second-gen Volt after years with the Corvette and Camaro. “It is eco-performance.”

Inside, the Volt receives upgrades such as a next-generation Chevy infotainment system, which is accessed via an 8-in. (20-cm) color touchscreen atop a revised and simplified center control stack. Drivers see an 8-in. color, reconfigurable instrument panel.

USB and other power points are relocated from the center console to a lighted area forward of the gearshift.

Other additions to the Volt include an exterior charge port light, a revised portable charge cord pack designed for easier use and GPS-based charging so owners can customize their charging preferences for plugging in at home or a public space.

The next-gen Volt arrives at U.S. Chevy dealers in the second half of this year, and pricing will be determined closer to launch. It is unclear if the new car will be any less expensive than the $35,000 GM currently asks. A $7,500 federal tax credits remains available.

“We know the space,” says Steve Majoros, head of marketing for Chevy cars. “We know where we need to be (priced) to be competitive.”

GM officials remain cagey over the next-gen Volt’s profitability. Executives have previously admitted the current model loses money and the goal was to take $10,000 of cost out of the redesigned Volt.

Fletcher refuses to talk about the new Volt’s profitability, and coyly suggests the new content reflects additional investment in the car.