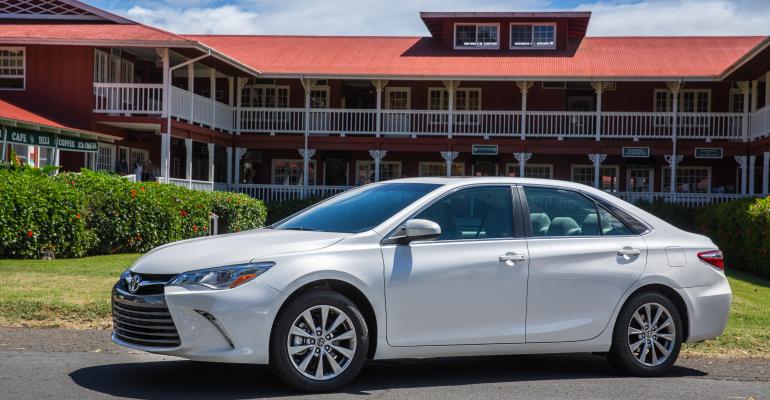 The segment has seen a cadence of automakers introducing markedly upgraded models.

It’s not exactly a full-blown redo, but it comes close.

The Camry has been the best-selling car in the U.S. for 12 straight years, and Toyota wants to hit lucky 13 and beyond.

But this is the abnormally competitive midsize sedan market. As the competition intensifies, the segment has seen a cadence of automakers introducing markedly upgraded models featuring sleek and eye-catching lines that in the past weren’t associated with 4-door family cars.

It’s part offense, part defense. The Japanese automaker looks to gain ground here and there with the new model produced at its busy factory in Kentucky. At the same time, Toyota is protecting its high position.

“We’ve raised the bar again in the midsize segment,” Fay says. That bar has been rising rapidly, as various automakers weigh in.

For instance, the redone ’13 Ford Fusion received a warm reception because of both its driving dynamics and sleek design. Fusion sales went from 241,263 units in 2012 to 295,280 in 2013, according to WardsAuto data.

The Chrysler 200 for years had been a so-so player in the segment. But the automaker this year introduced an all-new model with quality, performance, looks and features that are in marked contrast to its predecessor.

With much fanfare, Hyundai introduced its redone Sonata this year. Deliveries through August stood at 130,514 units, a 5.8% increase from year-ago.

At the Hyundai Sonata’s April unveiling in New York, Dave Zuchowski, CEO of the South Korean automaker’s U.S. unit, told WardsAuto the midsize-sedan competition in the U.S. is “a bloodbath.”

The new Camry demonstrates Toyota’s determination and wherewithal, auto analyst Joe Phillippi, president of AutoTrends, tells WardsAuto. “They sell a lot of them, and they want to protect that. The No.1 status is very important to them. And they can afford to do something like this.”

Toyota officially declines to say how much it spent on the new Camry, but doesn’t deny estimates of $500 million.

“We stripped the current Camry down to the chassis, and started almost from scratch,” Fay says at a media event here. “There are 1,900 new parts. We changed all the exterior panels except for the roof.”

By calling the improvements unprecedented, does that mean Toyota is setting a precedent of shorter product cycles in general from now on?

“That’s a good question,” Fay tells WardsAuto. “It doesn’t necessarily mean that. A 5- or 6-year lifecycle is pretty standard in the industry, and we have no intent to dramatically change that.

“But what’s unprecedented is the extent we changed and improved this vehicle. It offers us a chance to incorporate what we learned for other high-volume vehicles.”

Mainstream vehicle upgrades of late represent one half of two converging trends occurring in the auto industry.

Consequently, upmarket mainstream and downmarket luxury are coming close to rubbing shoulders in the marketplace.

Addressing that is Mike Michels, Toyota vice president-communications. “Do you want a top-of-the line (Camry) or bottom of the line from Germany? Sometimes there are some sacrifices (with the latter).”

Toyota bills the new version of its top-seller as the “boldest-looking Camry ever,” citing stronger profile lines, “swept-back” headlamps and a wider stance. Compared with its predecessor, the car is slightly longer (1.8 ins. [45 mm]) and slightly wider (0.4 ins. [10 mm]).

The automaker also touts its quieter, more-refined ride due to a stiffer body structure and enhanced aerodynamics. Additional spot welds enhance rigidity. That allowed engineers to retune the suspension systems of all four trim models, ranging from the base LE (starting at $22,970) to the premium XLE ($31,370).

The lineup includes the sportier SE model ($23,840). Its buyers are on average 12 years younger than other Camry customers.

The interior redesign is intended to give the car a more upscale look with advanced instrumentation, soft-touch materials, larger buttons and knobs and a bigger navigation screen.

Inside is a new center stack and center console offering more storage room, a 12V power port, USB port and a segment-first: wireless charging for smartphones.

Engineers focused on reducing wind and road noise. Window and door seals were improved to block outside noise. Side mirrors were redesigned to reduce airflow turbulence and noise.

He and colleagues rode in the back with their data recorders on and ears open. Such engineer-consumer interaction was a Toyota first, something like a mobile focus group.

Kaehr recalls a woman driver going over a bump. There was a ca-ching sound. She said, “That felt harsh.” But Kaehr says data measurements didn’t indicate any out-of-the-ordinary suspension issues.

“It was really the sound that was impressing her about the harshness of the road,” he tells WardsAuto. The subsequent installation of more sound-absorbent carpet insulation addressed that.

The engineers rode with 70 people in three locations nationwide.

“It gave us the kind of information you only get when you are sitting with the customer,” Kaehr says.

The Camry’s advanced-safety features include a pre-collision system, adaptive cruise control, lane-departure alert and blind-spot monitor. Also on board are 10 airbags.

What isn’t new are the engine offerings. Those are carryovers from the previous model.

“Consumers didn’t ask for anything there,” Fay says. “Horsepower was down on the list. We didn’t see a case to change powertrains.”