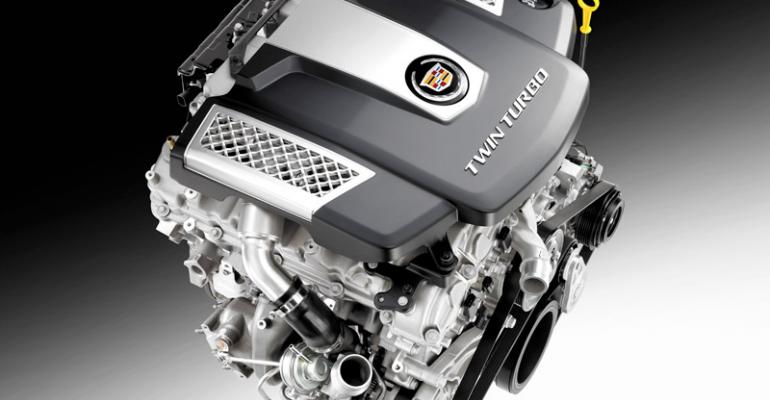 Notably, GM will source its first-ever 8-speed transmission from Japan&rsquo;s Aisin Warner. The auto maker was expected to begin production by now of an in-house 8-speed.

DETROIT – General Motors today reveals plans to bring to three the number of powertrain options on the ’14 Cadillac CTS, including an all-new twin-turbo 3.6L V-6 engine making 420 hp and mated to an 8-speed automatic transmission.

Also newly available will be a 272-hp 2.0L turbo 4-cyl., which bowed in the Cadillac ATS last year with slightly fewer ponies. An upgraded 321-hp 3.6L naturally aspirated V-6 will remain available. Both of those engines will be paired with a 6-speed automatic transmission.

The third-generation CTS will bow at next week’s New York International Auto Show and arrive at dealers sometime in the fall.

Notably, GM will source its first-ever 8-speed transmission from Japan’s Aisin Warner. The auto maker was expected to begin production by now of an in-house 8-speed, which it will need to raise the fuel efficiency of its cars and trucks to meet strict new federal regulations, at its Toledo, OH, powertrain facility.

“It isn’t ready,” he tells WardsAuto at an event here for the new powertrains. “This (Aisin gearbox) here is an outstanding transmission. It was ready to go and met the model-year timing.”

Leone stops short of saying GM’s 8-speed is behind schedule. The transmission also is expected to be featured in the auto maker’s new fullsize trucks and future performance cars.

“It takes a long time to bring a transmission to market,” he says.

The powertrain takes specific aim at the BMW 4.4L twin-turbo “TwinPower” V-6 in the German auto maker’s 550i sedan, and will come as part of an upscale package incorporating other high-performance items such special tires and brakes to effectively bridge the gap between the standard CTS and CTS-V.

“This is not a replacement for the CTS-V,” Leone says of the new engine, which ranks as GM’s most power-dense V-6 ever at 118 hp per liter. It is 15% more powerful than the present BMW 4.4L twin-turbo V-6, GM says.

“Very respectable,” Leone says of the fuel economy estimates. “It will not be a gas-guzzler.”

The GM engineer does not say whether the new twin-turbo V-6 will supplant a V-8 for an ATS-V, as is widely expected. But, he adds, “Anything is possible.”

GM will add the engine to the XTS large sedan, mating it to a 6-speed automatic transmission.

The new engine builds on GM’s existing 3.6L architecture, but in addition to a Mitsubishi-sourced twin-turbo adds items such as an all-new block and head, strengthened connecting rods and machined, domed aluminum pistons with top steel ring carrier for greater strength.

The compression ratio rises to 10.2:1, and the engine receives a new direct-injection fuel system.

The V-6 will be built at the auto maker’s Ramos Arizpe, Mexico, powertrain facility.

GM hinted at the new engine in 2011 with the Ciel concept car. The Ciel's engine matched in displacement, also used two turbos and had nearly identical power output numbers. Its transmission, however, was a hybrid with low-speed electric drive.