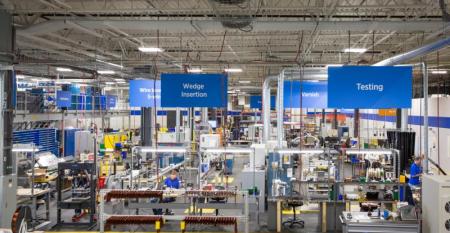 U.S. Dealers Receiving New Land Rover Defender
Jun 01, 2020
The SUV will have a starting price of $49,900 and will feature full-time 4-wheel drive, a twin-speed transfer box and a fully independent suspension.

Mercedes-Benz Teases New-Gen S-Class
Jun 01, 2020
Mercedes-Benz confirms the new S-Class will make its world premiere during second-half 2020 as originally planned, despite recent rumors suggesting production disruptions linked to the COVID-19 pandemic could delay its launch until next year.

BMW Updates 5-Series, X2 With New PHEV Drivetrains
May 28, 2020
The facelifted 5-Series is due in North American dealerships during third-quarter 2020 in a renewed sales push against premium-brand rivals such as the Audi A6, Cadillac CTS and Mercedes-Benz E-Class.

GM Joint Venture Prepping for Ohio Battery Plant
May 21, 2020
The 50-50 venture with South Korean battery maker LG Chem has begun preparing the site of the new plant which will manufacture...

Acura to Digitally Reveal New-Gen TLX
May 20, 2020
The Type S, powered by a 3.0L turbocharged V-6 and returning after a decade-long hiatus, will be the TLX performance model.

VW Still Strong on Gas-Powered Performance
May 15, 2020
A team working on the upcoming Golf R is getting involved with R-line models for electric powertrains, a VW executive says, but for now the automaker is keeping its Golf focus on gas-powered performance models in North America.
Load More