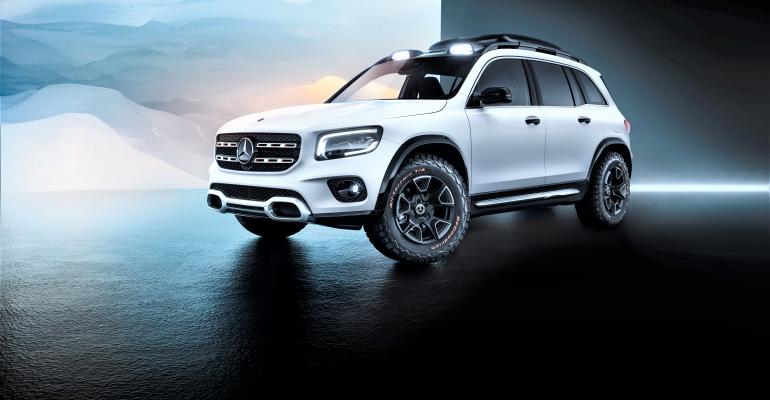 As well as offering conventional combustion engines, the GLB also is being developed as a battery-electric model due to join Mercedes-Benz’s new EQ electric-vehicle sub-brand badged as the EQB in 2021.

Mercedes-Benz previews its latest compact model with the unveiling of the Concept GLB at the 2019 Shanghai auto show.

Planned to go into production later this year, the SUV has been conceived to rival the Audi Q3, BMW X1 and Lexus NX with upright exterior styling inspired by that of the German automaker’s iconic G-Class and variable all-wheel drive.

In a bid to appeal to families, either a standard 5-seat or optional 7-seat interior will be offered.

As well as offering conventional combustion engines, the GLB also is being developed as a battery-electric model due to join Mercedes-Benz’s new EQ electric-vehicle sub-brand badged as the EQB in 2021.

Mercedes-Benz plans to position the SUV between the upcoming second-generation GLA and recently facelifted GLC.

Pricing remains under wraps, but the base GLB is expected to cost close to $36,000 when North American sales begin later this year following the definitive production model’s planned September debut at the Frankfurt auto show.

The GLB follows the A-Class hatchback, A-Class sedan, long-wheelbase A-Class sedan sold in China, B-Class, CLA, CLA Shooting Brake and GLA as the eighth model to be based on Mercedes-Benz’s MFA platform.

“We asked ourselves whether there is space between the GLA and GLC. The GLB is the answer to this question – a durable and practical SUV with nonetheless compact dimensions,” says Britta Seeger, Mercedes-Benz board member responsible for sales.

The Concept GLB is claimed to provide a close preview to the appearance of the production version of the GLB. The one-off show car uses a production-based bodyshell and mechanical package, although additional styling elements have been added to the exterior in a bid to give it a more rugged and upmarket appearance than its showroom sibling.

Among the concept-car flourishes is a metallic element within its lower front air duct, new horizontal metallic details within the grille, revised headlamp graphics, widened wheel arch cladding, reworked sills, additional lights incorporated within its glass roof and a cargo box nestled within its roof bars.

“We focused heavily on the G-Class when designing the Concept GLB. The sheer and upright design provides it with exceptional roominess,” says Achim Badstübner, head of Mercedes-Benz exterior design.

The Concept GLB receives a luxurious interior (below, left) swathed in a combination of Nappa and nubuck leather, walnut trim applications and elements milled from solid aluminum. The production version of the new SUV will be less opulent, though the basic design and layout will remain unchanged, according to Hartmut Sinkwitz, Mercedes-Benz interior design boss.

To ease access to the third seat row, the outer seats within the second row receive a so-called easy-entry function. It allows the backrest to fold down and the entire seat to be pushed forward. Up to four child seats can be accommodated in the second and third rows of seats. 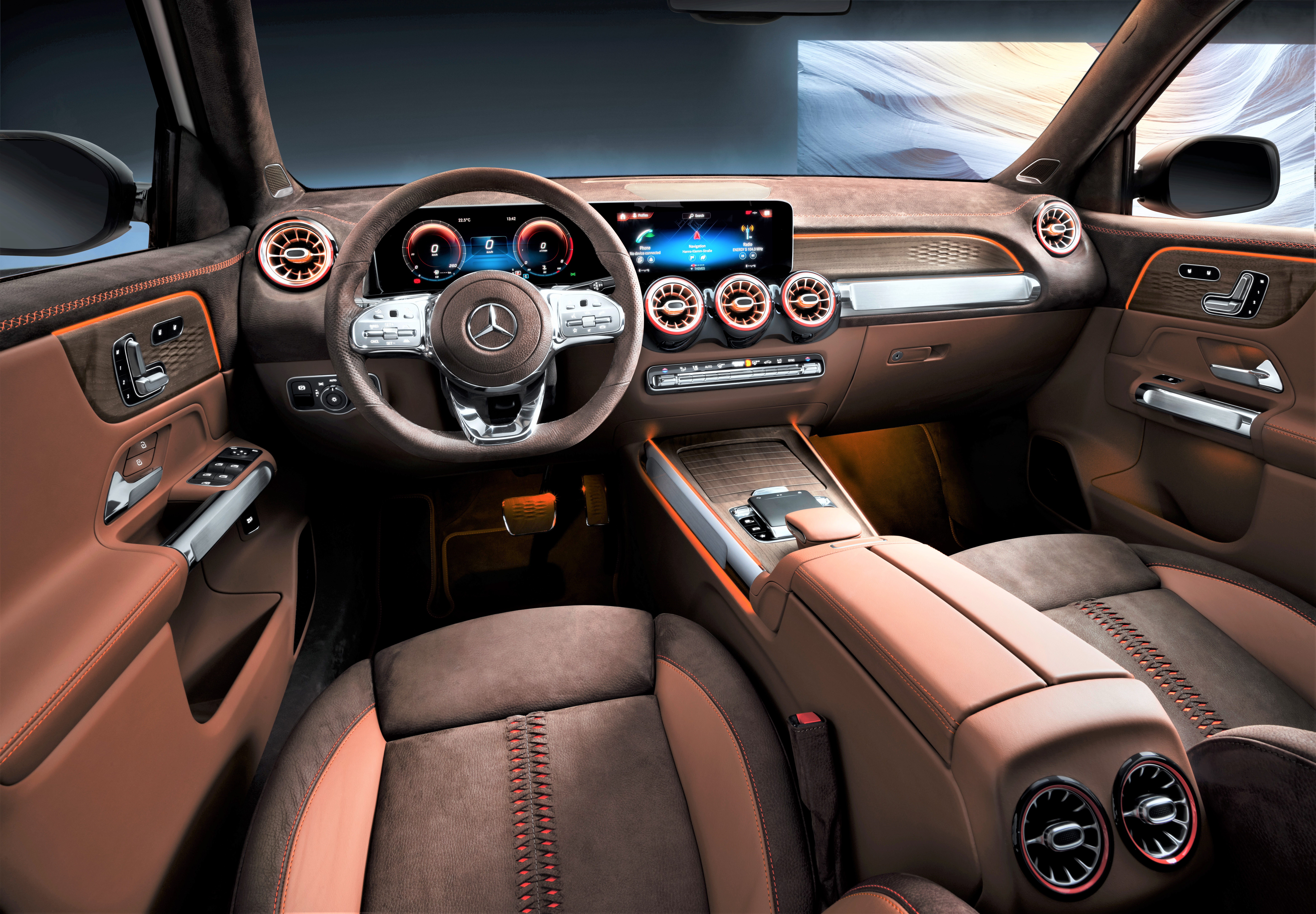 To conserve cargo space, the third row of seats can be manually folded and recessed flush into the floor of the trunk when not in use.

Hinting at the top engine planned to be offered in the standard GLB lineup, the Concept GLB receives a turbocharged 2.0L gasoline 4-cyl. The transversely mounted unit, which uses a two-stage variable valve timing system and conically shaped cylinders among other efficiency-boosting measures, develops 221 hp and 258 lb.-ft. (350 Nm) of torque.

Codenamed M264, it is the same engine offered in several new compact Mercedes-Benz models and is earmarked to power the initial range-topping GLB250. Other powerplants will be available when sales of the new Mercedes-Benz SUV launch, including an even more powerful version of the M264 set to appear in the AMG-badged GLB35 with 302 hp and 295 lb.-ft. (400 Nm) of torque.

Drive is sent through an eight-speed dual-clutch gearbox and an electro-mechanically operated multi-plate clutch 4Matic four-wheel-drive system boasting three modes: Standard, Eco/Comfort and Sport – each with its own individual drive split between the front and rear axles.