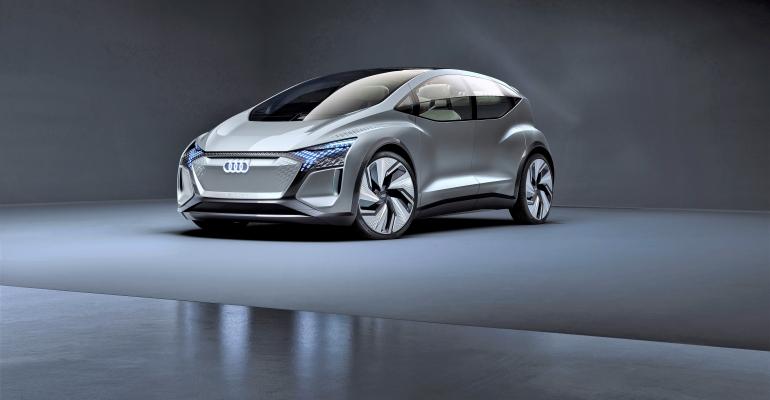 The new Audi is conceived for maximum functionality in tight city driving environments, with compact dimensions and a cabin designed for excellent all-round visibility.

The new Audi AI:ME concept is revealed ahead of its public debut at the 2019 Shanghai auto show, previewing the German automaker’s plans for a new entry-level electric-powered hatchback as part of a multi-model shared-mobility ecosystem.

The AI:ME is the third of four concepts Audi says it is creating to display its vision of shared mobility by the end of the next decade, with the idea that so-called subscribers choose the car they require for any given journey. It follows the Aicon displayed in 2017 and PB18 e-tron supercar shown in 2018.

While the Aicon previewed a future electric-powered luxury sedan and the PB18 e-tron pointed toward an electric-powered supercar, the AI:ME hints at a more affordable offering that Audi insiders suggest could fill the void left in the automaker’s lineup by the discontinuation of the A2.

The new Audi is conceived for maximum functionality in tight city driving environments, with compact dimensions and a cabin designed to provide excellent all-round visibility.

In a break from traditional car design, the middle section of the side windows is wider than the bottom section. This is to ensure the widest point of the cabin is where your head is. To accommodate the new design, only the bottom half of the windows open.

The exterior also features front and rear LED lights designed to send signals to pedestrians and other vehicles through light sequences and colors.

Commenting on the AI:ME’s contemporary appearance, Audi exterior design boss Andreas Mindt says, “Urban cars all look like telephone boxes, and we didn’t want that,” adding, “It is still simple and boxy, with clear lines.”

As with the Volkswagen ID. hatchback and SEAT el Born, the AI:ME is driven by a rear-mounted electric motor. With 125 kW, it is used to drive the rear wheels. Power is provided by a 65-kWh lithium-ion battery mounted with the floor.

Inside, the compact Audi showcases Level 4 autonomous-driving functions with a retractable steering wheel within a roomy cabin. Concept-car design flourishes include tables, a food-storage unit and magnetic cupholders. A large storage bin within the dashboard remains open to reduce the chance of subscribers leaving personal belongings behind in shared cars.

The AI:ME’s infotainment system is operated via an augmented-reality display operated by touch-sensitive panels within the doors. When in autonomous-driving mode it can be controlled by movements in sight via eye-tracking cameras.

The interior materials are designed to be soft and tactile. As part of an in-built air-filtration system, the Audi concept also houses plants in its dashboard and roof.