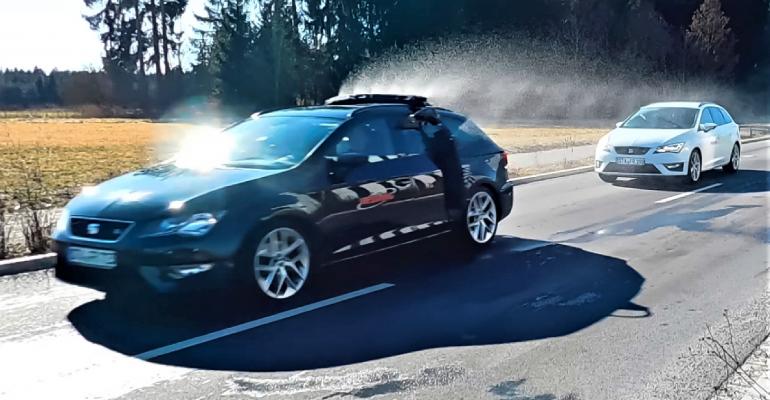 Messring, a German provider of crash-test technology, introduces the SprayMaker, which simulates rainy weather during the testing of sensors used by autonomous vehicles and driver-assistance systems.

“The driving assistants are dependent on the accurate recording of the environment,” Messring says in a news release. “The weather has the greatest disturbing influence on the environmental measurement via camera, radar and lidar.”

The SprayMaker consists of two 26-gallon (100L) water tanks, mounted inside the car, and a hose and pump system. Two water nozzles attached to the rear and side of the car are connected to the tanks.

A remote control activates the nozzles, which allow different flow rates of .26 gallon (1L) or .52 gallon (2L) per nozzle per minute.

With a total of 12 nozzles, a continuous spray of eight or 16 minutes can be generated. Depending on the choice of nozzle, the vehicle is doused with either a fine spray mist or a stronger spray cloud.

“We have discovered that the future systems of active safety such as object detection, pedestrian protection, accident detection and others can be severely limited by the weather-related performance of the sensors,” says Igor Doric, managing director of Messring Active Safety.

“For the further development of the sensors and thus the future active safety of vehicles, the SprayMaker now offers an effective test tool for all suppliers and developers of sensors and driver-assistance systems.”