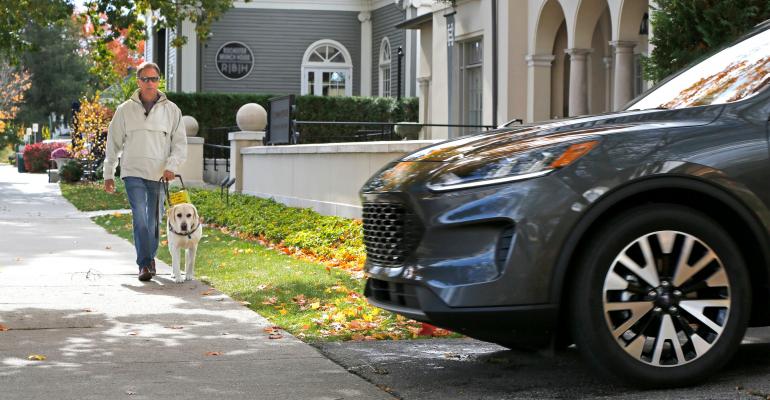 What Ford describes as a “melodious new sound” is meant to make the streets safer for distracted and visually impaired pedestrians in the vicinity of nominally silent electrified Explorer and Escape CUVs.

Did you hear? Ford has engineered a unique sound to alert pedestrians when a ’20 Explorer Hybrid or Escape Hybrid is approaching.

What the automaker describes as a “melodious new sound” is meant to make the streets safer for distracted and visually impaired pedestrians in the vicinity of the nominally silent electrified CUVs.

Ford says in a news release it worked with organizations advocating for people who are visually impaired, including Michigan-based Leader Dogs for the Blind, to help create an alert that is easily recognizable as a moving vehicle.

Once global guidelines for sound volume, frequencies and pitch were established, Brian Brassow, a Ford specialist in noise, vibration and harshness, began designing the sound that would meet NHTSA regulations while also shaping public perceptions of Ford’s new crop of hybrid and electric vehicles. His team worked with a Royal Oak, MI, production company that produces music and movie soundtracks.

The Ford hybrid sound, known internally at the automaker as O-29, has a volume and frequency similar to that of a gasoline-powered engine but has a unique designer sound produced by two hidden street-facing speakers in the front and rear of the Explorer and Escape hybrid.

The sound is activated when the CUV is operating in reverse, neutral or drive at speeds up to 19 mph (31 km/h). When the vehicle is stationary, the sound modulates as if it is breathing and changes frequencies as the vehicle speeds up and slows down.

“For Escape and Explorer, we were originally envisioning something technical, mechanical, but O-29 is a different approach,” Brassow says. “It’s fluid, more chord-like than what you hear across the industry.

“We zeroed in on ensuring it’s not too overpowering because one key feature electric-powered owners like best about their cars is that they’re quiet.”

Leader Dogs client Jeff Hawkins, a retired paramedic who is legally blind, welcomes the technology: “When I first heard electric cars were coming, it honestly scared the heck out of me. I’m really glad to hear Ford is addressing this issue because it will benefit not only blind pedestrians but everyone.”

The all-new Ford Escape and Ford Explorer hybrids are arriving at Ford dealers now. A plug-in hybrid-electric Escape will be available in 2020.