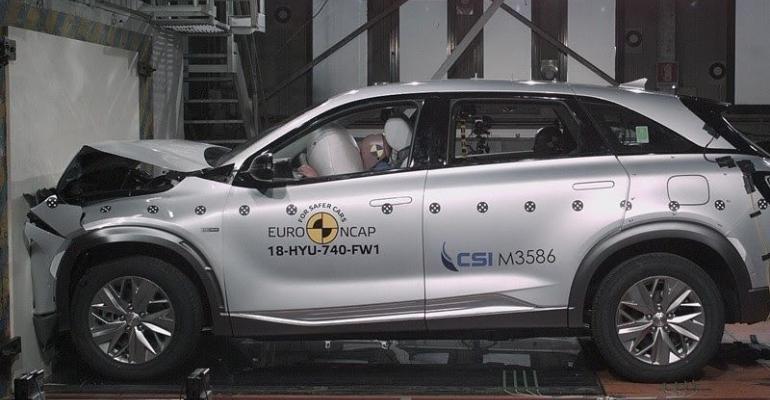 The Peugeot Rifter and its stablemates, the Citroën Berlingo and Opel Combo, receive four stars.

“The fuel-cell Nexo and hybrid ES point the way for future powertrains, and Euro NCAP will work to ensure that safety performance as well as energy efficiency remains at the top of the manufacturers’ agenda,” Euro NCAP Secretary General Michiel van Ratingen says in a statement.

“Hyundai showed that a similar level of protection would be provided to occupants of different sizes and to those sitting in different positions,” NCAP says. “In the full-width rigid-barrier test, protection of the driver dummy was good for all critical body areas.”

Protection of the rear passenger was good or adequate.

In both the side-barrier and the more severe side-pole impacts, Euro NCAP says protection of all critical body areas was good and the Nexo scored maximum points.

Tests of the front seats and head restraints demonstrated good protection against whiplash injury in a rear-end collision. However, a geometric assessment of the rear seats indicated poor whiplash protection.

The standard autonomous emergency braking system performed well at the low speeds typical of city driving at which many whiplash injuries are caused.