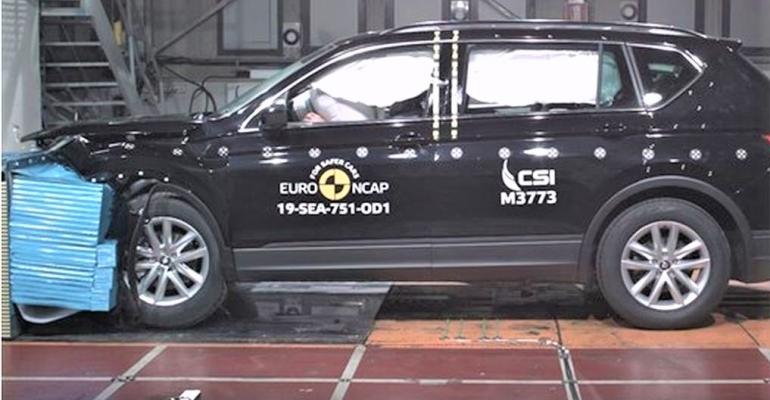 “But the fact all three off-roaders are equipped with pedestrian and cyclist (automatic emergency braking) systems really demonstrates the power of consumer testing, not only to encourage better performance but also to promote new technologies as standard fit across Europe,” he says in a statement.

NCAP says the Tarraco shares Volkswagen’s MQB platform with the Škoda Kodiaq, which earned a five-star Euro NCAP rating in 2017. It scored 97% in adult-occupant protection, 84% for child protection and 79% for both vulnerable road-user protection and safety assist.

The previous-generation Honda CR-V was tested as a diesel in 2013. In a sign of the times, this latest version was a gasoline-electric hybrid, anticipated to be the biggest-selling variant. The CR-V scored 93% in adult-occupant protection, 83% in child protection, 70% for vulnerable road users and 76% for safety assist.

Mercedes-Benz’s G-Class achieved its five-star rating with scores of 90% in adult-occupant protection, 83% in child protection, 78% for vulnerable road users and 72% for safety assist.

In the U.K., Matthew Avery, research director for Thatcham, a not-for-profit, insurer-funded research center, says all three vehicles are raising the safety-technology bar.

“This important safety technology that Euro NCAP has advocated since 2012 will now be standard fit in Europe following the recent announcement of the new European General Safety Regulations,” he says.