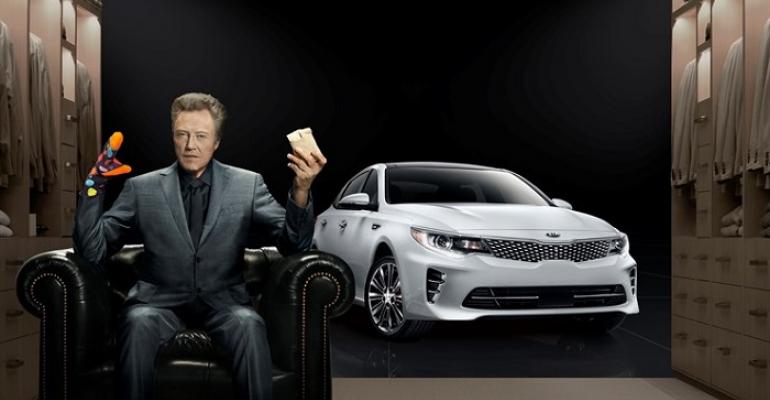 Although many automakers are taking a break from advertising during the Super Bowl, a hefty number still will make a showing for Sunday’s game.

Audi, General Motors, Honda, Hyundai, Kia, BMW's Mini and Toyota all are expected to advertise during Super Bowl 50, airing on CBS from Santa Clara, CA, in a year when Ford, Nissan, Mercedes-Benz and Volkswagen decided to sit the bench.

In keeping with recent tradition, most automakers already have released their commercials online, ads featuring a Super Bowl-typical slate of celebrities, retro music and animals, sometimes in combination.

Hyundai, as the new official automotive sponsor of the NFL, will air four TV ads this year.

“We made a very big investment to try to own that Sunday,” Dave Zuchowski, CEO-Hyundai Motor America, recently told media at a preview for the ’17 Elantra.

The new Elantra stars in two of the four commercials Hyundai will air either during the game or its preshow.

Actor Ryan Reynolds is in an Elantra spot that emphasizes the car’s optional advanced safety technology. The commercial, dubbed “Ryanville” for the numerous times the actor appears, will air during the game’s second quarter.

Airing before kickoff, when Zuchowski jokes viewers “are not burned out (and) not drunk yet,” is a commercial touting the Genesis sedan and Hyundai’s BlueLink car-finder feature.

Here, Hyundai employs another celebrity, comedian and actor Kevin Hart, who lends his car to his daughter’s date, only so he can track the couple on a night out via a BlueLink app on his smartwatch.

Hyundai’s fourth Super Bowl ad, “Better,” airs during the pregame show and features a boy with an engine for a heart who becomes a Hyundai designer, set to the ELO song "When I Was a Boy."

Hyundai’s sister brand Kia also is advertising during the big game, using actor Christopher Walken in “Walken Closet,” in which the actor draws a comparison between socks and the new ’16 Kia Optima.

Honda’s Acura brand returns to the Super Bowl after a 4-year absence and employs the Super Bowl advertising trick of using retro music, in this case Van Halen’s “Runnin’ With the Devil,” to tout the NSX production supercar.

“The high-energy visuals are complemented by a big rock anthem, giving viewers just a taste of the emotion this new Acura supercar elicits,” Jon Ikeda, Acura senior vice president, says in a statement.

The Honda brand, back advertising during the Super Bowl after a 2-year absence, uses sheep singing Queen’s “Somebody to Love” to tout the attributes of the ’17 Ridgeline pickup, namely its in-trunk audio system.

"The big game is the largest and most coveted stage to show the world that Honda is back in a big way with an all-new Ridgeline truck,” Jeff Conrad, senior vice president-Honda Div., says in a statement.

Honda’s top rival Toyota returns for a fifth-consecutive year with a commercial for its redesigned Prius liftback.

In the hybrid’s spot, which is a hefty 90 seconds long, a dorky working stiff named Todd drives around town while singing about how his Prius is “heck on wheels” and “badass,” while a flock of ducks sing backup.

Audi’s Super Bowl commercial is perhaps the most timely of the bunch, harkening back to both the Jan. 10 death of David Bowie and 30th anniversary of the space-shuttle Challenger explosion. The commercial for the new R8 features a retired astronaut reminiscing about his past while driving the car, set to the soundtrack of Bowie’s “Starman.”

FCA US had been a question mark for Sunday's game, but yesterday announced it will air two commercials, one during halftime and the second in the fourth quarter. It reveals no details of either spot. FCA has had some of the most memorable commercials in recent years, including ones starring typically publicity-shy musicians such as Bob Dylan and Eminem.

Commercials airing during the Super Bowl always are costly and this year is no exception. Reports say a 30-second spot for Super Bowl 50 begins at $5 million, up from $4.5 million in 2015.