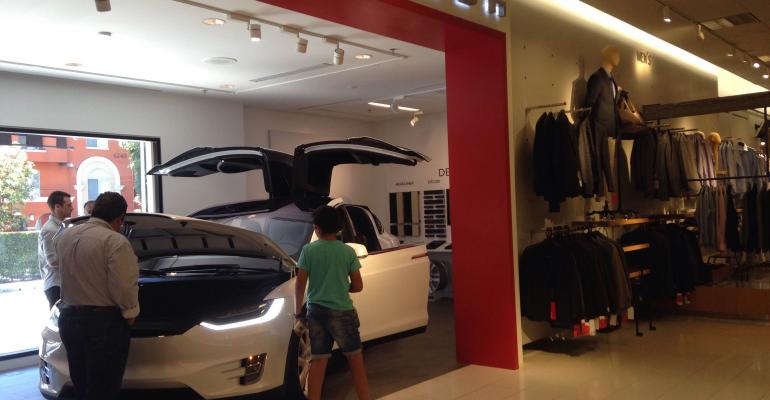 Tesla representatives at Nordstrom are able to offer test drives in the shopping center&rsquo;s parking lot but can&rsquo;t actually sell anything &ndash; yet.

LOS ANGELES – Seen by some as an auto-industry game-changer, Tesla Motors’ electric-vehicle showcase inside a Los Angeles-area department store is being scrutinized by the state’s dealers association, which has accused the automaker before of violating marketing laws.

The 400-sq.-ft. (37-sq.-m) display, the first such setup in the nation, opened to the public June 18 and features Tesla’s 7-seat Model X CUV, along with informational wall panels, where customers can pick and choose from various design options.

The mini-showroom is situated next to the men’s clothing department of the Nordstrom in the upscale outdoor shopping venue known as The Grove, within the city’s historic Fairfax District.

Jaime Ramirez, an elementary-school teacher waiting for his wife near the store’s shoe section, says he did a double-take when first espying the Tesla center through the long racks of shoe boxes.

“I had read that Tesla was going to open a shop here, but then forgot about it,” he says. “Then I saw it and was like, ‛Whaaat?’”

After venturing across the store’s expansive first floor and chatting with one of the Tesla staffers, Ramirez says he understands having a Tesla presence “makes sense in Nordstrom” because both upscale brands pull from “much the same demographic: Those with disposable incomes, who are in a good place in life or are on their way, professionals and (those who) appreciate the finer things.”

Tesla will need to expand its customer base and reach out to more consumers still unfamiliar with its product line and EV technology if it is to reach its goal of selling 500,000 vehicles, including the planned new entry-level Model 3 sedan, by 2018.

Tesla representatives at Nordstrom are able to offer test drives in the shopping center’s parking lot but can’t actually transact anything, because the automaker doesn’t hold a sales license for the location, although it’s reportedly trying to get two – for the Model S sedan and Model X.

For purchases, motivated potential owners are encouraged to work with an offsite sales associate, visit a licensed Tesla store like the one five miles (8 km) away in Santa Monica, or jump online and place their orders on Tesla’s website.

That hitch in the process doesn’t sit too well with computer network developer Kenji Yamamoto of Torrance, who complains, “After fighting the weekend traffic to get here, we were disappointed to learn that if we want to buy one, we have to go someplace else.”

It’s possible Tesla never may gain permission to sell its EVs at Nordstrom, if the California Department of Motor Vehicles – which issued a warning to the EV maker late last year for advertisements it said misrepresented Model S prices – finds the display doesn’t comply with current market regulations.

Ever since it began sidestepping traditional dealership networks to market its vehicles, Tesla has been in the sights of the 1,100-member California New Car Dealers Assn., which was behind the complaint about Tesla’s advertising and challenged Tesla’s offer last year of $1,000 to owners who referred new buyers to the brand. That type of incentive is prohibited under California law.

CNCDA spokeswoman Madelyn Vacheron asserts the group is “taking steps” to ensure the Tesla-Nordstrom venture is in order.

The Sacramento-based trade association will be “looking into the matter, particularly whether Tesla has secured proper licensing for off-site sales,” she says, adding the CNCDA’s goal is “a level playing field and legal compliance among all car dealers, including compliance with advertising and licensing requirements.”

Tesla founder and CEO Elon Musk and Nordstrom’s top brass are expected to decide at some point if the EV boutique, as it were, will stay open past the end of the year and whether other Tesla displays will open in any of the department-store chain’s other 120 locations throughout the U.S. and Canada.

Future sites for the automaker’s customer-direct galleries also could include at least some of the 200 Nordstrom Rack discount stores across the country.