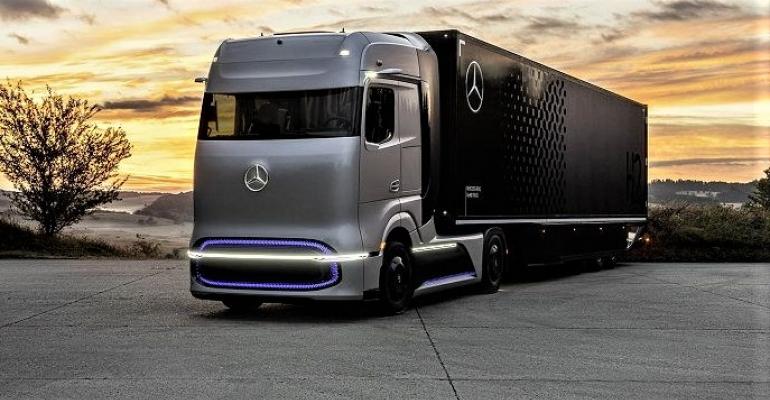 The joint venture, dubbed Cellcentric, is part of the companies’ commitment to bring hydrogen fuel cell-powered trucks to market in the second half of this decade. Operations are to commence in 2025.

Volvo and Daimler Trucks, bidding to be at the vanguard of developing hydrogen-fuel-cell powertrains for long-haul trucks, form a joint venture to accelerate the process.

The JV, dubbed Cellcentric, is part of the companies’ commitment to bring hydrogen-fuel- cell-powered trucks to market in the second half of this decade. Operations are to commence in 2025.

To accelerate the rollout, the two shareholders have called for a harmonized European Union hydrogen policy framework to support the technology.

The companies say Cellcentric will develop, produce and commercialize fuel-cell systems for both long-haul trucking and then other future applications. The JV will draw on decades of expertise and development work from both Daimler Truck and the Volvo Group.

Both truck makers agree purely battery-electric and hydrogen-based fuel-cell trucks will complement each other depending on the individual customer use case. Battery power will be focused on lower cargo weights and for shorter distances, while fuel-cell power will be the preferred option for heavier loads and longer distances.

More than 300 specialized experts work for Cellcentric in interdisciplinary teams at locations in Nabern, Stuttgart in Germany and Burnaby, ON, Canada. The JV claims about 700 individual patents have been issued so far.

“In combination with pure battery-electric drives, it enables us to offer our customers the best genuinely locally CO2-neutral vehicle options, depending on the application,” he adds. “Battery-electric trucks alone will not make this possible. Regarding the necessary hydrogen infrastructure, it is clear that green hydrogen is the only sensible way forward in the long term.”

Volvo Group CEO Martin Lundstedt adds: “We are convinced that hydrogen-fuel-cell technology plays an essential role in helping us reach that milestone. But we know there is so much more to achieve than just the electrification of machines and vehicles.

“There needs to be greater cooperation between public and private stakeholders to develop the necessary technology and infrastructure, which is why we are calling for united action from policymakers and governments around the world in helping us make hydrogen fuel-cell technology a success.”