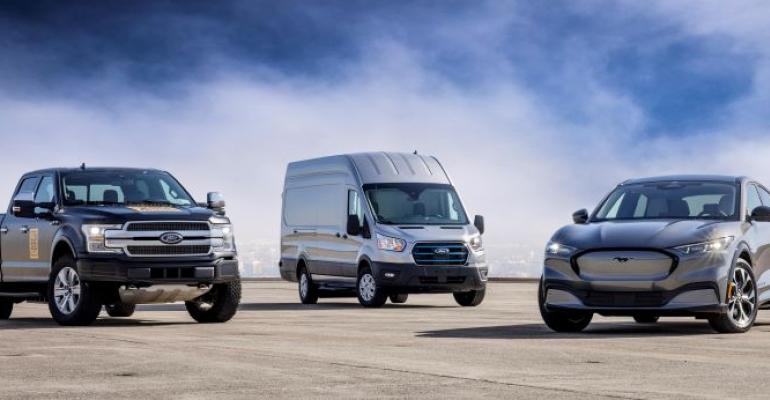 All three of Ford’s early-adopter models, the Mustang Mach-E, E-Transit and F-150 Lightning, share common powertrain features that allow the automaker to bring product to market at a price point well below rivals’ equivalent models.

Ford is aiming to put some of the least-expensive “premium” battery-electric vehicles on the road thanks to a production strategy based on commonality of technologies.

All three of its early-adopter models, the Mustang Mach-E, the E-Transit and the F-150 Lightning, share common powertrain features, including motors, battery packs and chargers, that allow the company to bring product to market at a price point well below rivals’ equivalent models.

While this has gone a long way to securing more than 160,000 non-fleet reservations, for example, for the upcoming F-150 Lightning, Darren Palmer, general manager for EVs for Ford, says this is only one of the ways the company is attracting new and existing customers to the electric revolution.

In his presentation, How Ford Is Driving the Electrified Future of North American Automotive, at Automotive Tech Week 2021 this week in Detroit, Ford’s first overhaul of its EV strategy began with its traditional iconic models.

“We decided to lean into our icons, our most important vehicles, and to use the new technology to amplify the best attributes of each of those vehicles,” Palmer says.

“We have seen in history (people have) always been successful when you use new technology to do new things, not just do what you used to do. We are investing $30 billion to 2025 for that lineup, a significant investment for any company, so we are all-in on electrification. We see 40% of our lineup to be electric by 2030.” 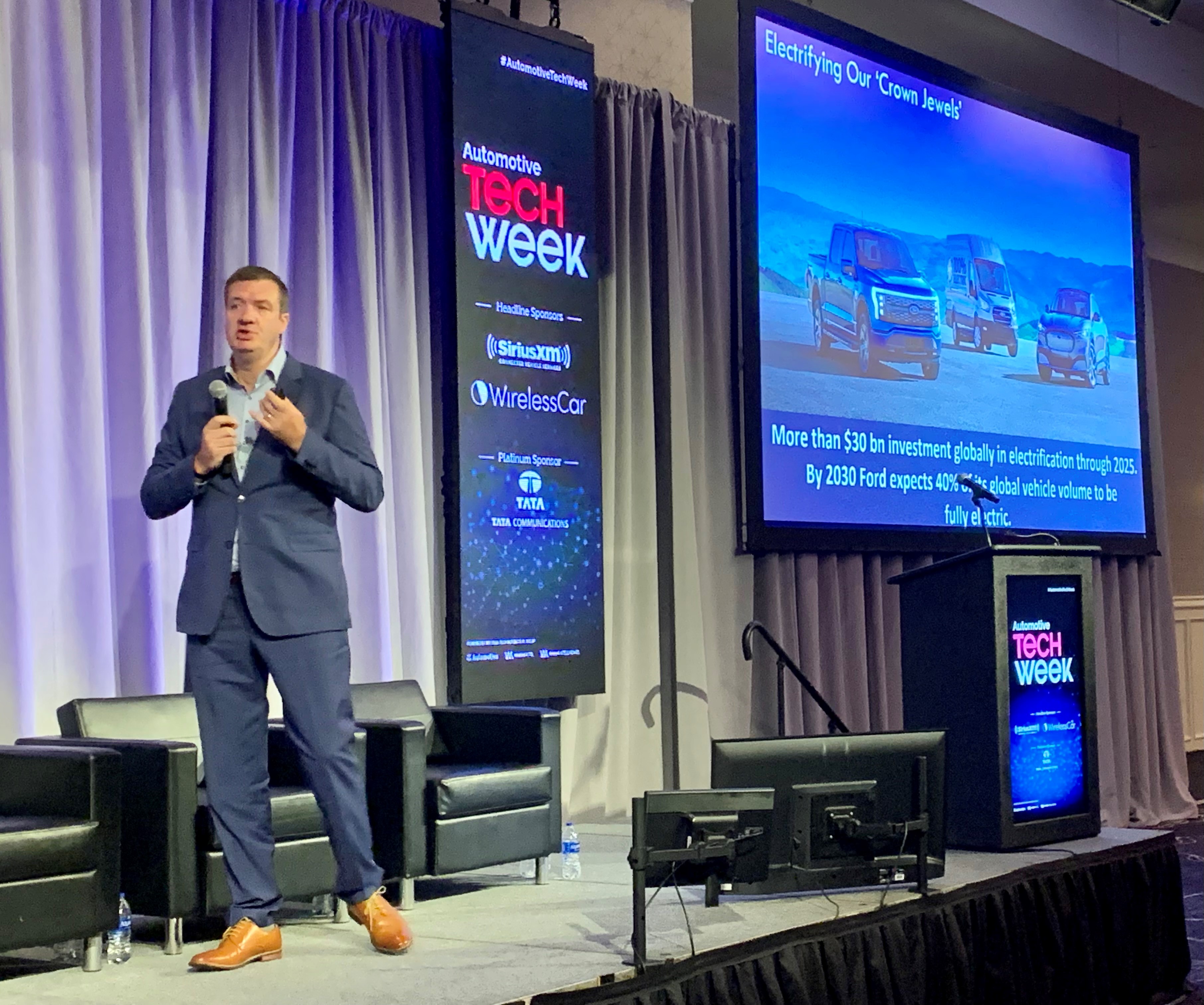 While the halo product may be the Mustang Mach-E, Palmer spends more time singing the praises of the two commercial models, pointing out that the Transit LCV is known to be the best-selling commercial vehicle globally. Drawing down from the Mach-E’s technology has helped keep the forecourt price low enough to attract fleet buyers, Palmer says.

“We recently brought in all of the biggest fleet operators in America for a review,” he adds. “We had a sales model where we let them enter their figures…and they could see in many cases this vehicle pays back from day one, not even a year, day one!”

He points to the extra complexities involved in managing a Ford Pro BEV fleet, such as charging infrastructure and peaks in energy demands, which would require control by data to run the vehicles at optimal efficiency.

Palmer says the key to shifting consumers out of internal-combustion vehicles and into BEVs is with an offering they can’t get from their existing vehicles.

“The key to electric vehicle take-up is providing fully capable vehicles that do things gas vehicles never did before,” he says. “That tempts people to come in, even though it is a risk for people to make the change, so they have to see a reason to move.

“When they do, we’ve seen with people who moved over to Mach-E, 91% of owners would recommend it to their friends and family and I’ve never met one customer who would go back to gas on that vehicle now. The only other product I’ve seen with that kind of take-up was the iPhone or smartphone.”

He points to features on the electric F-150 not seen on traditional vehicles, such as the Mega Power Frunk boasting 400L (14 cu.-ft.) of space not commonly available.

Being fully powered, owners have used this in a myriad of ways, from a permanent bay for the golf clubs to hosting a tailgating party with a television or stereo plugged in.

On top of this, he says the bidirectional power system, first seen on Ford hybrids where the car can be used to run a whole household, has seen the biggest response from customers, particularly those who have been experiencing some of the many electricity outages plaguing various states this year.

He cites stories from several customers caught in outages, including one in Michigan where a guest hybrid powered up a wedding reception so the bride and groom’s family and friends could party until the early hours. “That’s what captures people’s hearts and minds,” Palmer concludes.