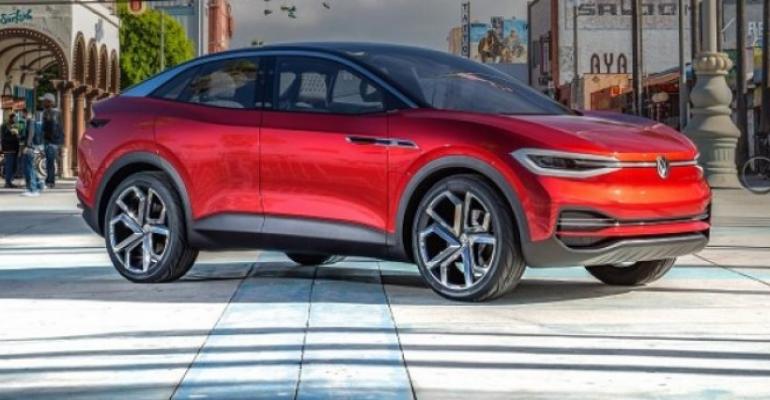 I.D. Crozz to be first all-electric MEB model to be built at new plant planned for Chattanooga.
Industry News>Auto Shows

VW Bullish on BEVs But Cautious Just the Same

The German automaker is earmarking $800 million to build a U.S. plant for VW-brand electric vehicles despite still-sluggish market demand and other headwinds, but it also is eyeing options that could mitigate some of the risks.

DETROIT – Volkswagen Group has aggressive plans when it comes to battery-electric vehicles, including a slate of 27 new models on the drawing board for launch by 2022 and an all-new U.S. plant to build a few of them.

But it also is exercising some caution when it comes to the market outlook here in North America, and how aggressively it puts those BEVs into the pipeline remains to be determined.

Although battery costs are coming down and consumer interest is increasing as BEV technology improves, current market conditions are less than favorable for full-electric vehicles in the U.S., where gas prices hover around a palatable $2.24 national average and Trump Admin. regulatory policies threaten to further chill demand for alternatively powered vehicles.

Scott Keogh, VW’s recently minted CEO of the North American Region, admits to being a strong believer in the future of BEVs, but says his company will be realistic in its approach to building and selling them.

“I’m an optimist on the electric-car market,” he says, noting to-date the sector is dominated in the U.S. by Tesla, with a handful of other players selling models with less success to various degrees. “We’ve seen what Tesla is capable of on the luxury end, (now) we’ve got to win on the non-luxury end. That’s what the battleground is going to be about.”

Despite the uncertainty still surrounding consumer acceptance, VW announced this week at the North American International Auto Show here it would build a new dedicated battery-electric-vehicle assembly plant at its Chattanooga, TN, complex to produce its line of MEB-based models, creating 1,000 new jobs.

The automaker will launch its inaugural MEB car, a small hatchback called the I.D., in Europe later this year. The first MEB for the U.S. will be a CUV dubbed the I.D. Crozz that initially will be imported from Germany beginning late 2020. However, it, along with an unidentified second MEB model, will be built at the new Chattanooga facility beginning in 2022.

Decidedly on the bullish side is VW’s commitment to a new $800 million assembly plant in Chattanooga, especially considering VW will build MEBs in Europe and China as well.

Not everyone believes the timing is right to make such a big push into BEVs. Toyota Motor North America CEO Jim Lentz told the Automotive News World Congress this week, “I worry a little bit we are overstimulated in our belief that (BEVs) are going to take over the world quickly.”

Volkswagen has earmarked $34 billion for electrification between now and 2025, CEO Herbert Diess says, and the automaker isn’t alone in pouring money into BEVs. Alix Partners calculates announced industrywide investment in electric vehicles at $250 billion, and there reportedly are more than 200 new BEVs currently in the product pipeline around the world.

That may make the market cutthroat competitive and a tough one in which to turn a profit. But Keogh doesn’t believe VW is moving too fast too soon.

“We definitely want to jump in on the market opportunity early,” he says at an NAIAS media backgrounder, noting VW has been forced to play catch-up in other vehicle segments, most notably SUVs, and would rather not follow the same path with BEVs. “It’s significantly better entering these things early. Get your recognition, get known there, get famous there as (the market) grows.

“So, it is a bet; it is a risk,” he says of the massive BEV investment. “But fundamentally, it is one worth taking.”

Joern Buss, a partner at consultancy Oliver Wyman, says VW is right to move early to localize BEV production in the U.S., even with U.S. market demand iffy at best.

“Like most other players, they are recognizing e-mobility is something that is going to happen around the world,” he tells Wards. “If I want to supply a global market with my products, then I have to have a European footprint, a North American footprint and an Asian footprint.

“So, it’s very natural for them to say they’re going to have a facility here. The question is, how quickly are they going to build it up?”

VW is likely to look for ways to mitigate the risk of its investment in Chattanooga, Keogh acknowledges. The automaker may hedge its bets by producing MEB vehicles for other VW brands. Audi, which will get some MEB vehicles, potentially could help chew up a share of the plant’s capacity, and the luxury brand can draw a higher dollar for its models, increasing chances the vehicles can be sold at a profit.

There’s also potential for exports to markets outside North America, further maximizing the capacity investment. In addition, the approach to ramping up the Chattanooga facility is likely to be more cautious than usual for a new-product launch, meaning VW will try not to outspend the pace of the market.

Keogh doesn’t say it, but that could include building MEB-based BEVs for Ford. This week, VW and Ford announced plans to cooperate on the development and production of light-commercial vans and midsize pickups for certain markets. Although collaboration on BEVs is not part of the initial deal, the automakers have signed a memorandum of understanding to investigate a potential tie-up on autonomous vehicles, mobility services and electric vehicles.

“I do anticipate that if there are opportunities we will pursue them…(as) it helps with utilization, it helps with fixed-cost optimization,” Keogh says.

Arndt Ellinghorst, head of global automotive research for consultancy Evercore, believes it would make sense for Ford to lean on VW for BEVs.

“VW has by far the biggest ambition when it comes to fully electric vehicles,” he tells the Automotive News World Congress. “They will scale (the MEB platform) up to 2.5 million-3 million units. So VW will have a unique selling proposition with this MEB platform, (and) I think the company is very open to licensing it out. Ford would be very smart to take that up.”

Last year, automakers delivered 208,573 BEVs in the U.S., according to Wards Intelligence. An estimated 1,198,000 were sold worldwide in 2018, Wards-LMC data shows. For its part, Volkswagen Group is targeting global sales of 15 million BEVs by 2025 – an annual average over the next seven years that would about double current global sales.

Keogh remains optimistic targets can be reached, saying it will take government mandates and regulations; technology innovation and cost reductions; plus, broader consumer acceptance to drive the market.

“I see all these things converging to make this thing go,” he says. “I don’t want to say it’s ideal…but there’s a lot of EVs about to hit the market. That’s going to start to get chatter, get comparisons, get conversations (going).”