/sites/all/themes/penton_subtheme_wardsauto/images/logos/footer.png
Recent
Featured
EVs and What Automotive Industry Must Learn – and Unlearn
May 05, 2021
Do not use
brought to you by 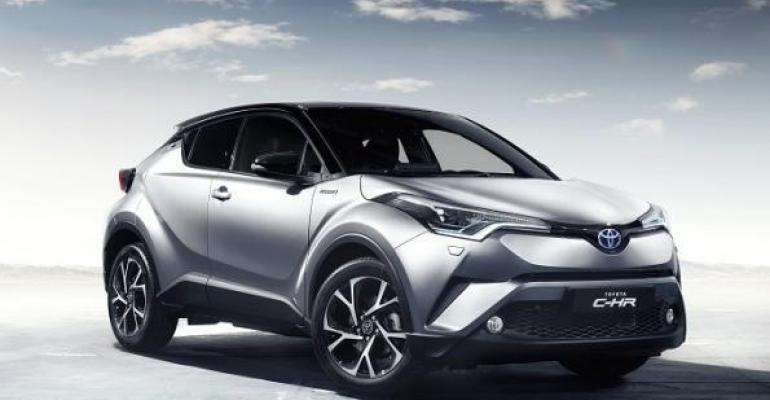 Toyota: C-HR Might Have More Potential, Flat Sales in 2017

DETROIT – Toyota says it expects to sell 30,000 units of its new C-HR small CUV this year, and 60,000 in a full year, but a top executive believes it may have more potential than that.

He says production is dictating the new CUV’s projected sales volumes, but hints Toyota may be able to get more units.

The C-HR is being assembled for the U.S. at Toyota’s Sakarya, Turkey, plant, which is supplying other markets such as Europe.

WardsAuto’s Small CUV segment was one of the industry’s fastest-growing in 2016, up 26.0% last year from 2015, to 968,013. A slew of models tallied north of 75,000 units, including those from automakers with lower volume than Toyota. The Chevy Trax, Buick Encore, Honda HR-V, Subaru XV Crosstrek, Hyundai Tucson and Kia Sportage booked between 78,000 and 95,000 deliveries. The Jeep Patriot led the group with 121,926 sales. Jeep’s Compass and Renegade also racked up more than 90,000 sales last year.

Toyota is working to remedy the situation by increasing production of in-demand light-truck models, such as the Highlander and RAV4 CUVs, while scaling back car builds to reduce inventories of the vehicle type on U.S. dealer lots.

WardsAuto production data shows Toyota is set to build 0.2% fewer units in North America in the first quarter than year-ago, with car output being cut 2.2% and light-truck builds scheduled to rise 1.3% from Q1 2016.