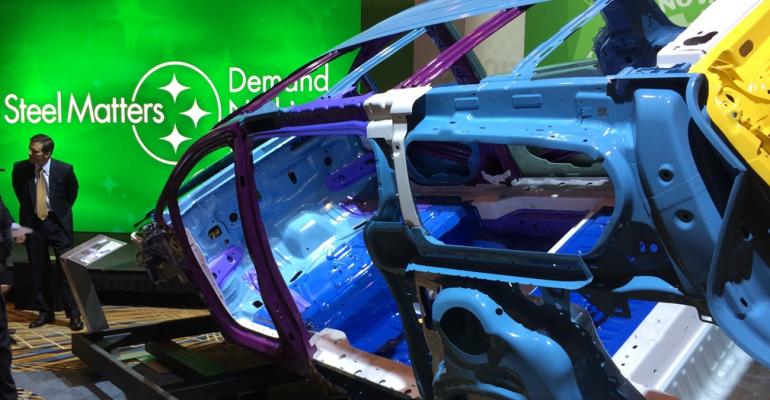 The auto industry has increased its use of other metals such as aluminum, but steel remains the overall material of choice.

DETROIT – Steel, the go-to material of the auto industry, is a strong presence at the 2017 North American International Auto Show.

The steel industry at the event here uses billboards, a press conference and cut-out vehicle displays to tout the material’s extensive automotive applications.

Automakers seeking to reduce vehicle weight to improve fuel economy have increased their use of other metals such as aluminum and composites such as carbon fiber. Yet, steel remains the overall material of choice.

That’s largely because of its value and strength, says Gregory Warden, a body-engineering executive at General Motors.

“I try not to play favorites among materials, but clearly the equation is dominated by steel, and I don’t see that changing,” he says after receiving the Steel Market Development Institute’s Industry Innovator Award.

Steel has been used in car making for more than a century, and remains attractive today because of advancements in strengths and increases in grade levels.

“Steel has grown from a handful of grades to a couple of hundred,” Jody Hall, SMDI’s vice president-automotive, says at a press conference.

Nearby are body cutouts showing the extensive use of steel in the Chrysler Pacifica minivan and Honda Ridgeline truck, which along with the Chevrolet Bolt, were honored Monday with 2016 North American Car, Truck and Utility of the Year awards.