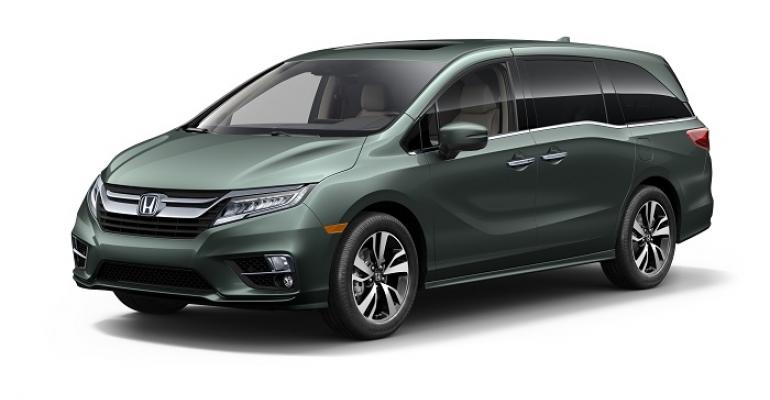 The fifth-generation of Honda&rsquo;s minivan keeps pace with competitors on technology, thanks to a cabin microphone and camera, as well as 4G LTE and a customizable display audio screen.

DETROIT – Honda pulls the wraps off the fifth-generation Odyssey minivan today at the 2017 North American International Auto Show in Detroit, revealing a similar appearance to the outgoing model, but a vehicle with much more technology.

The overall look of the Odyssey hews closely to its predecessor, but Honda tweaks the front end, with the minivan adopting the brand’s signature flying wing grille.

The lightning bolt detail at the base of the C-pillar remains, but has been smoothed out for the ’18 model, while hiding the tracks for sliding doors below the rear-quarter windows.

The interior undergoes a bigger change, thanks partly to the addition of a 7-in. (18-cm) full-color display between gauges and more soft-touch surfaces, including those covered in stain-resistant leather. Available in upper grades of the ’18 Odyssey, the leather is on first- and second-row seats as well as door trim.

Technology is the major upgrade seen on the Odyssey, with the minivan now offering a microphone system for the driver to address second- and third-row passengers, similar to a microphone on the rival Toyota Sienna minivan.

However, the Odyssey takes it a step further with an in-vehicle camera wherein the driver and front passenger can watch the back rows on the van’s 8-in. (20-cm) center display audio touchscreen.

That screen also is new, with promised more intuitive menus as well as customizable app tiles. Like most new Hondas, Apple CarPlay and Android Auto are available on the ’18 Odyssey. Also, as with the new CR-V, a volume knob will be featured, not a slider as seen on the Civic and Ridgeline.

To keep the Honda-developed display screen’s operating system running smoothly, users will be able to download updates to it and the Odyssey’s rear-entertainment system (RES), using the van’s new 4G LTE connectivity, or via WiFi or USB.

Similar to an app for the RES on the new Chrysler Pacifica, Odyssey backseat passengers can track a road trip’s progress through an app called “How Much Farther?” Also viewable or listenable on the 10.2-in. (26-cm) RES screen is PBS Kids, iHeart Radio and Spotify, via 4G LTE, public WiFi or cellphone data plan.

A cabin control downloadable smartphone app enables remote control of the RES, as well as rear cabin heat and air conditioning. The app also can send destinations to the van’s navigation system.

A feature of cabin control, social playlist, permits eight people to upload music to the in-car audio system via smartphone.

Not as high-tech but also new are magic slide seats, which allow child seats to remain installed in the second row while the third row is accessed. The center second-row seat can be removed and the outboard seats moved together to allow for this. The driver’s side seat also slides to the side or forward for easier access to a child in the second row.

Honda’s direct-injected 3.5L V-6 with cylinder deactivation from the Ridgeline and Pilot will power the ’18 Odyssey. With the new mill, replacing a non-DI 3.5L in the outgoing model, horsepower rises 32 to 280 hp.

The transmission sharply advances with 9-speed or 10-speed automatics replacing a 6AT. The 10-speed auto is Honda developed and said to provide “more confident and refined performance.” If it goes on sale in the spring as planned, the Odyssey will become the third vehicle to market in the U.S. with a 10-speed auto. General Motors' and Ford’s co-developed 10AT was due to launch in late December in the Ford F-150 and this year in the Chevy Camaro ZL1. Lexus also has a 10-speed due in the new LC 500 coupe.

Odyssey maneuverability is said to improve thanks to a new dual-pinion electric power steering system with variable gear ratio. Compared with the steering system on the ’17 Odyssey, it has 0.44 fewer turns lock-to-lock, Honda says.

The Odyssey’s body and chassis design is all-new, using advanced high-strength steel, aluminum and magnesium to cut weight and boost rigidity. The van loses up to 96 lbs. (44 kg) from ’17 to ’18 and torsional body rigidity rises 44%. Further, rear cargo room and ride and handling is improved with a compact trailing arm rear suspension, Honda says.

The Japanese automaker foresees top safety ratings from NHTSA and the Insurance Institute for Highway Safety, and notes its Honda Sensing suite of safety technologies will be available on EX and higher grades. Those grades typically comprise 95% of Odyssey sales. Knee airbags for driver and front passenger also are new safety features for ’18.

While the Odyssey slipped 5.4%, and the and the Sienna fell 7.1%, sales in WardsAuto’s Small Van segment rose 6.1% last year to 643,469 units thanks to growth by the Caravan and Kia Sedona, as well as new entrants the Mercedes Metris commercial van and Chrysler Pacifica.

The Odyssey will continue to be built at Honda’s Lincoln, AL, plant. The engine will come from Lincoln, while the 10-speed automatic is being assembled at Honda’s Tallapoosa, GA, facility.