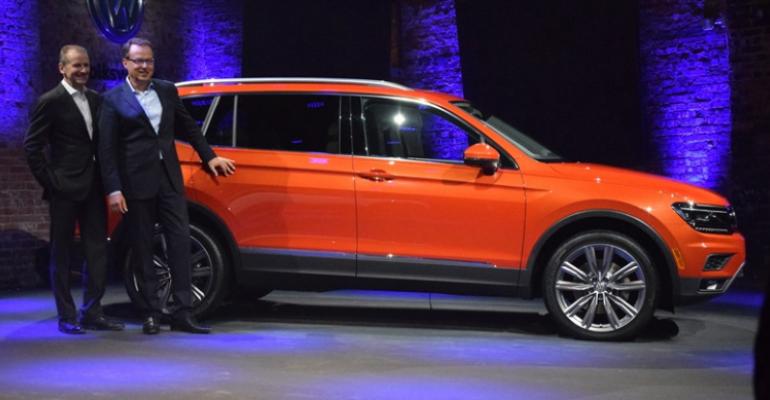 The second-generation Tiguan arrives after its larger sibling, the 3-row Atlas CUV, which also shares VW&rsquo;s MQB modular architecture. With both vehicles arriving as CUV demand remains robust, the automaker is proclaiming 2017 the &ldquo;year of the #SUVW.&rdquo;

DETROIT – The Volkswagen Tiguan has struggled for attention in the small CUV segment, closing out 2016 behind nine other entries, including three Jeeps (Compass, Patriot and Renegade) and a Subaru (XV Crosstrek), all of which outsold it by a margin of more than 2 to 1.

Tonight, VW moves to step up its competitiveness in one of America’s hottest vehicle segments by revealing the all-new long-wheelbase ’18 Tiguan that is 10.7 ins. (272 mm) longer than the current model and offering 57% more cargo space and an optional third row.

The Atlas goes on sale in the second quarter and will be assembled at the automaker’s plant in Chattanooga, TN. VW considers the Atlas a midsize CUV, but WardsAuto will place the vehicle in its Large CUV segment.

With both the Tiguan and Atlas arriving as CUV demand remains robust, the automaker is proclaiming 2017 the “year of the #SUVW.”

The new Tiguan will come from VW’s plant in Puebla, Mexico, designed specifically to meet the needs of the American market. Its wheelbase measures 109.9 ins. (2,791 mm) – 4.4 ins. (112 mm) longer than the new Tiguan sold in Europe.

“The new Tiguan demonstrates how we plan to give American customers the usability and versatility they demand without sacrificing style or Volkswagen’s trademark driving dynamics,” says Hinrich Woebcken, CEO of Volkswagen-North American Region.

Many consumers considered past Tiguans to be too expensive, so Woebcken says the Tiguan will be competitively price with the segment.

VW remains in the regulatory doghouse for rigging diesel engines to bypass onboard technology designed to reduce oxides of nitrogen emissions, so TDI fans eager for a Tiguan will have to settle for a gasoline engine.

The only powertrain available in the front-wheel-drive CUV is an updated version of Volkswagen’s 2.0L direct-injected turbocharged TSI 4-cyl. rated at 184 hp and 221 lb.-ft. (300 Nm) of torque.

Exterior design improvements include a 26-degree approach angle for off-roading as well as a lower lift-in height for the cargo hold. The power liftgate can be foot-activated.

VW says the Tiguan’s Automatic Post-Collision Braking System is a first for the segment.

Inside, the optional Volkswagen Digital Cockpit allows drivers to reconfigure the instrument panel.

0 comments
Hide comments
Related
Tiguan Has Heart of a Tiger
May 22, 2008