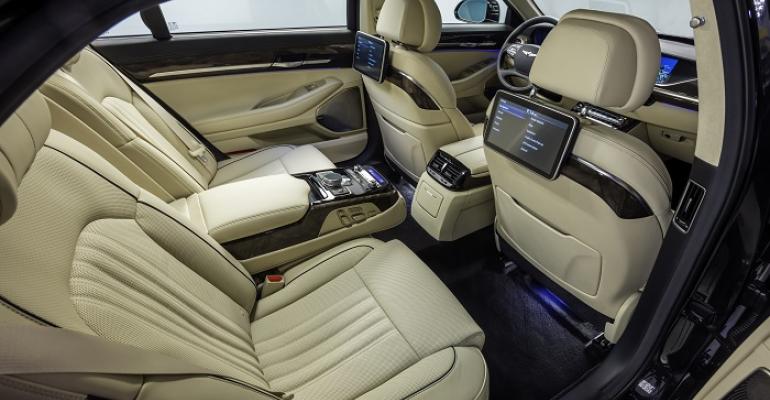 U.S. and Korean versions of the car are mostly identical, save for different badging (the G90 is known as the EQ900 in South Korea) and features dictated by regulatory requirements, says a Hyundai spokesman.

They both wear the same tall and wide “crest” grille as the current-generation Genesis sedan, which is being renamed G80 and is shifting to the Genesis-brand lineup as well.

LED daytime running lights are standard, while the V-8 G90 gets LED headlights.

Unlike in South Korea, where buyers will select from three engines, the U.S. G90 will offer two: an all-new 3.3L direct-injected, twin-turbocharged V-6 making 365 hp and a 5.0L DI V-8 making 420 hp and carrying over from the Equus.

A 3.8L V-6, offered on the outgoing Equus and the current Genesis, is available on the G90 in South Korea.

The U.S. G90 will come in five colors: white, black, brown, silver and gray, a palette Hyundai says “was painstakingly matched to a wide spectrum of interior environments and sophisticated material selections.”

Interior colors include black with walnut trim and beige with gray ash trim.

Hyundai boasts of “effortless ergonomics” inside the G90, as well as the comfort and convenience luxury car buyers expect. 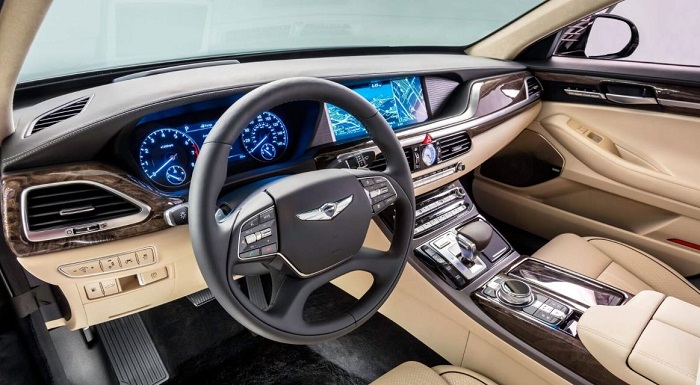 The increase in wheelbase boosts interior volume generously from the Equus, Hyundai says, citing “superior front headroom and legroom” compared with its competitors.

A knob-controlled 12.3-in. (31-cm) screen houses many functions, including a parking camera with on-screen guidelines.

Hyundai promises “stressless” seats – the driver’s seat is a 22-way power seat and the passenger seat 16-way – and class-leading noise, vibration and harshness levels. The latter is credited to a variety of measures, including Hemholtz-designed wheels that are hollow and constructed of two pieces.

Other features of the G90 include Intelligent Drive Mode with Eco, Smart, Sport and Individual settings that change suspension, steering, stability control, engine, transmission and (if equipped) all-wheel-drive calibrations; a claimed 6% better bending rigidity than the Mercedes-Benz S550 thanks to 52% advanced-high-strength steel, and a Sachs/ZF adaptive control suspension, which promises better body and yaw control due to independent damping control of rebound and compression strokes.

As on the current Genesis, the G90 has available Magna’s H-TRAC AWD system. Able to be matched to the V-6 or V-8, H-TRAC can send 40% of available torque to the front axle in icy and snowy conditions, or up to 90% to the rear axle during normal weather conditions.

Equus sales volume typically has been low, but sales of the aging model in the U.S. fell 31.7% last year to 2,332 units, WardsAuto data shows.