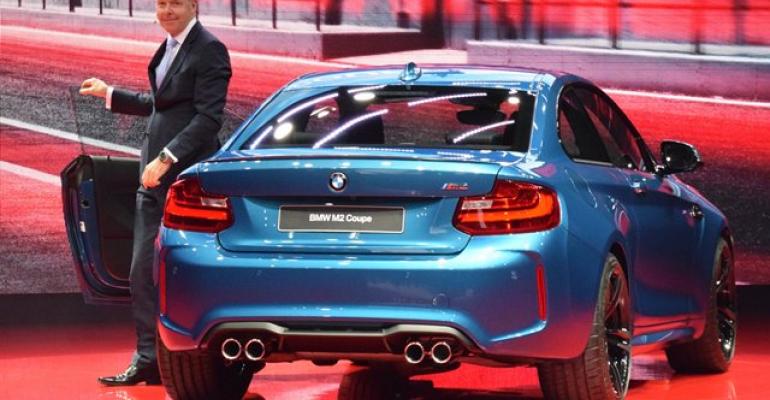 DETROIT – BMW celebrates its 100th anniversary this year with the world debut here at the North American International Auto Show of the ’16 M2 coupe and X4 M40i, both powered by improved versions of the N55 3.0L turbocharged inline-6 that won Wards 10 Best Engines trophies in 2011, 2012 and 2013.

The N55 engine has been a workhorse across the BMW lineup for several years and eventually will be replaced by the new modular B58 3.0L turbo I-6, which wins a 2016 Wards 10 Best Engines trophy for its application in the 3-Series sedan.

But the new versions in the M2 and X4 M40i suggest the automaker is extending the life of the N55 by revising and reinforcing it to create more horsepower and torque. BMW describes the M Performance TwinPower Turbo in both vehicles, employing a single twin-scroll turbocharger, to be “newly developed.”

Standard with a manual transmission, the M2 also will be available with an optional 7-speed M Double Clutch automatic. Top speed is electronically limited to 155 mph (250 km/h), or 168 mph (270 km/h) if the M Driver’s Package is specified.

BMW sales chief Ian Robertson is convinced the new M2 “is going to be the benchmark” in its competitive set.

Asked if the U.S. market needs a 4-door M car of similar size, Robertson sounds skeptical. “We’ve had lots of success with the M3 as a 4-door, and of course the M4 is a 2-door version, and we have other 4-door performance cars in the lineup like the M5,” he tells journalists Monday. “We might look at another derivative of this (M2), but for the moment I think the coupe is the right position to be in.”

Half of U.S. i3 Customers Pick EREV

The standard 2-Series launched two years ago, and enhancements for the M2 beyond the engine include a wider stance, bigger brakes and lightweight aluminum axles. The electronically controlled Active M Differential optimizes traction and directional stability, and the M Dynamic Mode allows wheel slip and controlled drifts on the track.

Rear-wheel drive is standard in the M2, and Robertson sounds doubtful when asked if all-wheel drive could be added. “M cars have always had RWD as their heart,” he says. “But who knows what happens in the future?”

BMW considers the M2 a spiritual successor of both the original E30 M3 as well as the BMW 2002 turbo, which arrived more than 40 years ago and set the template for the “Ultimate Driving Machine.”

The automaker considers the X4 M40i to be a 4-door “sports activity coupe.” Relative to the standard X4, the M40i gets stronger springs and anti-roll bars, active dampers and increased camber on the front axle, as well as xDrive AWD.

In the area of electric vehicles, Robertson says BMW is pleased with the success of the i3 EV and i8 plug-in hybrid.

“The i3 has established itself at the pinnacle of its segment, and in 2015 we sold almost 30,000 i3 and i8s around the world,” he says. “And i3 is the world’s third-best selling pure electric car. We are transforming and transferring our knowledge from the i products to electrify our whole fleet,” including plug-in hybrid versions of the 3-Series and 7-Series coming this year.

The i3 is available with a range-extending generator, and Robertson says the take-rate globally for the EREV is 60%. In the U.S., the split is about 50/50. In Norway, where EV incentives are generous, BMW sells virtually no EREVs, he says.

Also on the sales front, Robertson says the M division had an “outstanding” 2015, with full-year sales worldwide up 65% to more than 35,000 units.