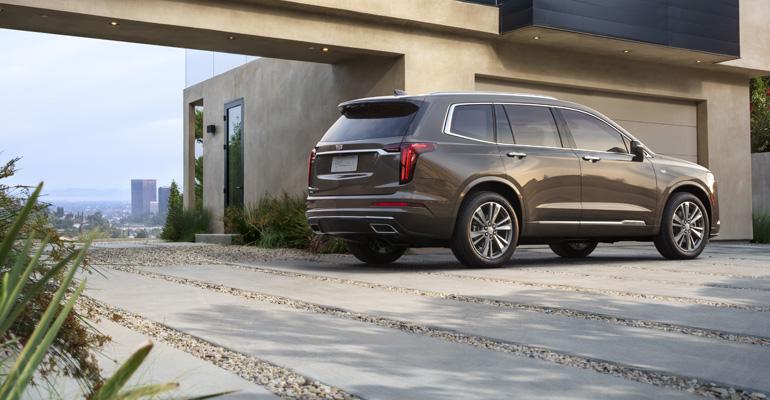 The 3-row segment is the fastest growing corner of the booming CUV market, and the XT6 should give Cadillac a much-needed shot in the arm.

The 3-row XT6, which bows later today ahead of the North American International Auto Show here, will be available to order in the spring with deliveries beginning in the summer. Pricing will be released closer to its on-sale date, but it will compete against CUVs costing between $45,000 and $50,000 out of the box, such as the Acura MDX, Infiniti Q60 and Volvo XC90.

The ’20 Lincoln Aviator, a fresh 3-row CUV from crosstown rival Ford that made its debut at the Los Angeles auto show in November, also could be considered a competitor although it is off an all-new architecture with a raft of new gadgetry. The XT6, which will be no slouch on the technological front with its latest-generation user interface, available on-board Wi-Fi hotspot and advanced all-wheel-drive system, rides on a version of the 3-year-old platform underpinning the XT5.

But the 3-row segment is the fastest growing corner of the booming CUV market, and it should give Cadillac a much-needed shot in the arm. The legendary brand was assigned a $12 billion investment three years ago to make it more competitive with German and Asian luxury units, but the reboot sputtered with a car-centric portfolio in a market that had quickly pivoted in favor of just about anything with five doors and a tall ride height.

The Escalade, which is expected later this year, remains Cadillac’s halo vehicle and, while the distance between it and the XT6 will remain wide, the smaller truck with its V-6 engine and unibody construction should appeal to a broader demographic than the beefy V-8 powered body-on-frame SUV.

“We wanted to scale the Escalade down to an everyday vehicle,” says Cadillac Global Design chief Andrew Smith.

The XT6 shares the same 112.5-in. (2,858-mm) wheelbase as the XT5, but it is longer, wider and taller than its stablemate to accommodate the third row. The added height was done to give the XT6 road presence, too, but also to avoid the cramped third row of some other luxury CUVs and relatively generous boot for cargo.

“Every seat is the best seat in the house,” Smith tells a handful of journalists during a sneak peek of the truck in Premium Luxury and Sport trims at GM world headquarters before they were carted uptown for a Sunday night public unveiling. 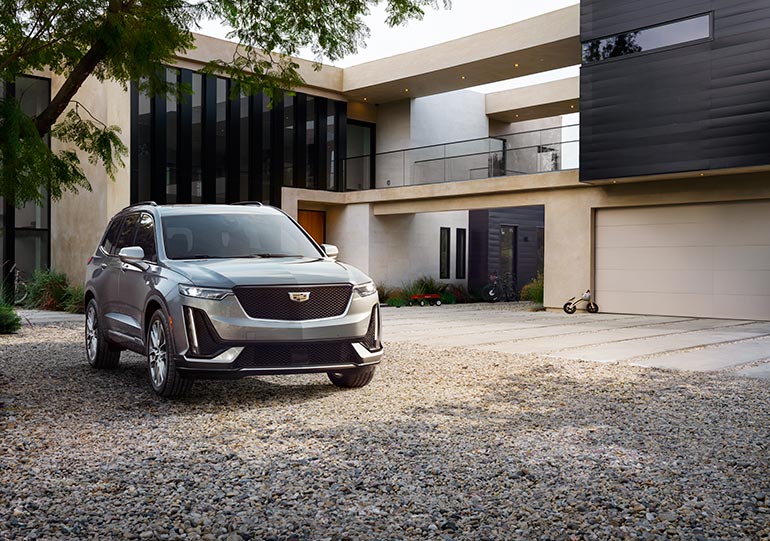 The third row folds flat, as does the second row, to make a perfectly flush load floor up to the front seatbacks. The third row will power down from switches in the cargo area and along the interior C-pillar. Access to the third row on both 6- and 7-passenger models is through a single-motion mechanical latch at the outboard of the second-row seats, although nimble passengers could squeeze between the available second-row captain’s chairs.

There are two USB ports in each of the three rows, with the latest fast-charging ports in the way-back.

Front and rear exterior styling draws heavily from the Escala concept car first shown 2016. It is instantly recognizable as a Cadillac with its signature vertical exterior LED lighting, including triple-element projector headlamps, but Smith says his design team went to great lengths to imbue the XT6 with individuality.

For example, sport models receive an aggressive, blacked-out mesh grille unseen before on a production Cadillac, while Premium Luxury models get a more dignified black grille with raised, steel-color chevrons. The chevron is a longtime Cadillac design cue.

Sport models receive standard 20-in. wheels, although 21-in. shoes are available. Premium luxury versions have 20-in. wheels. The XT6 Sport also receives a unique lower exhaust and black taillights compared with red on Premium Luxury units.

The two models, which include the Cadillac Platinum top-trim package for the XT6 Premium Luxury, share the same 310-hp 3.6L gasoline direct-injection V-6 with fuel-saving cylinder deactivation technology mated to a 9-speed automatic transmission. But the Sport model with standard all-wheel drive will handle much differently than its twin thanks to a faster steering ratio and available real-time suspension damping.

An electronic, twin-clutch rear differential on Sport models also will improve handling with torque-distributed yaw control. Curbs weight is estimated between 4,400 and 4,600 lbs. (1,996-2,087 kg), depending on whether the model is front- or AWD.

Infotainment includes the Cadillac User Experience interface that recently debuted on the XT4 small CUV, but the rotary controller adds a “jog” feature to permit side-to-side navigation of the 8-in. (20 cm) touchscreen in addition to scrolling. The steering wheel also comes from the XT4 but in a slightly more premium execution.

While the XT6 boasts a wide range of the latest available advanced-safety and driver-assistance technologies such as Night Vision and adaptive cruise control, it will not receive GM’s critically acclaimed Super Cruise hands-free driving technology until the next model year.

The XT6 will be built at GM’s Spring Hill, TN, assembly plant.