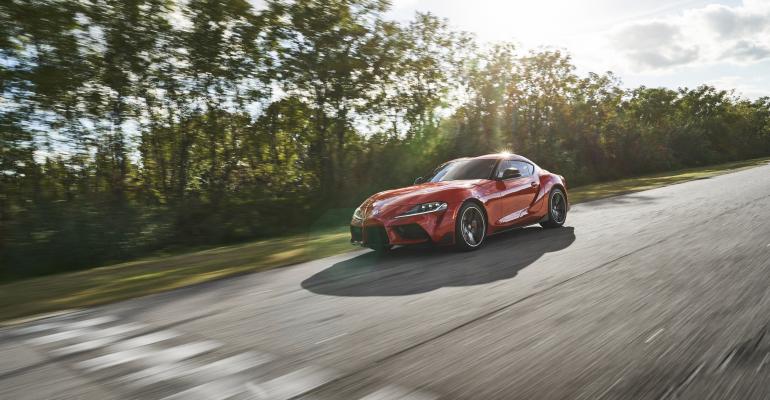 The fifth generation of Toyota’s Supra rear-wheel-drive sports car was a co-development with BMW and uses the German automaker’s B58 3.0L turbocharged and direct-injected I-6, a 2019 Wards 10 Best Engines winner in the X5.

DETROIT – The most talked about vehicle of the 2019 North American International Auto Show is one of its first debuts, as Toyota unveils the long-awaited all-new Supra here this morning.

The new 2-seat sports car, the revival of which has been teased for years including via the FT-1 concept of the 2014 NAIAS and the A90 from the July 2018 Goodwood Festival of Speed, gets un-camo-ed here at Cobo Center with performance specifications also released.

“Driving enthusiasts can look forward to an exhilarating blend of power, precision and agility thanks to a rear-wheel-drive design that honors Toyota’s sports car heritage with its low center of gravity and optimal weight balance,” the automaker says in a statement released to media ahead of this morning’s debut, promising a car equally suited for track and everyday driving.

However, the engine is not a Toyota creation, but a BMW one, as the two automakers partnered to share development costs on notoriously low-volume sports cars. BMW’s result of the collaboration is the new Z4 roadster.

BMW’s 3.0L twin-scroll turbocharged I-6 with direct injection powers the Supra. The engine, designated B58 and which is a 2019 Wards 10 Best Engines winner in the BMW X5, has continuously variable valve timing on intake and exhaust camshafts and a variable intake valve lift system, adjusting intake valve timing and duration.

The mill is mated to an 8-speed automatic transmission with promised quick shifting up and down, as well as paddle shifters if preferred. The lower gears have short ratios, and there is a launch control function to “enable powerful acceleration with maximum traction.”

The Supra, with a 50:50 front-rear weight balance, boasts the low-center-of-gravity/high-structural rigidity combination to satisfy a development goal of neutral cornering balance. Nine areas of the Supra’s rear structure were reinforced for improved rigidity, the automaker says.

The car has a double-joint spring strut front suspension and multi-link rear. Toyota describes as “extremely rigid” the front-suspension subframe and control-arm-mounting points. Control arms are aluminum to bring down un-sprung weight for better agility and efficiency.

The five-arm multi-link rear suspension is composed of aluminum and steel, for weight reduction and strength/durability reasons.

Toyota says the new Supra, styled at the automaker’s Japan design studio, is closely connected to the ’67 Toyota 2000 GT and the ’93-’02 Supra, as well as the California-designed ’14 FT-1 concept.

Toyota says it condensed the forms and enhanced the powerful character of the FT-1 design for the Supra. Falling into the latter category is a stretched hood to highlight the engine.

A nod to the 2000 GT is the double-bubble roof design, which helps cut drag without sacrificing occupant headroom, the automaker says.

While it resembles the fourth-gen Supra, the new model’s front fascia carries a bigger grille, with large air intakes on each side.

Toyota describes the car’s dash as low and narrow to improve forward visibility.

The sports car’s seats have integrated head restraints and large shoulder bolsters to keep the driver and passenger in place. Alcantara faux suede power seats are standard on the 3.0 grade, and heated leather seats come on the 3.0 Premium model.

The car’s trunk, covered by a composite hatch, can fit baggage for two people on a “weekend getaway,” as well as long items like a tool kit for track use.

A modern touch is the car’s six-lens LED headlights which have a distinct look with integrated DRLs and turn-signal indicators. In the rear, backup LEDs are placed in the center of the lower bumper, while turn, tail and stop functions are within the main ring shape of the combination lamps.

Also in keeping with current trends is the Supra’s spate of infotainment, convenience and advanced-safety technology.

The entry 3.0 grade will have Bluetooth and a 6.5-in. (17-cm) display controlled by a console-mounted rotary dial, while the 3.0 Premium grade gets an 8.8-in. (22-cm) touchscreen with a rotary-touch controller. The high-end grade also features navigation, a 12-speaker JBL audio system (both optional on the 3.0 grade), a wireless phone charger and wireless Apple CarPlay. The last feature is still rare in the industry, available on select BMWs such as the 640i, a 2018 Wards 10 Best UX winner.

Pricing will be announced closer to launch.

A senior Toyota official recently stated emotion, not volume, was the reason to do another Supra. That is a good outlook, as last year’s U.S. sales of other sports cars suggests the Supra will experience rough waters.

Sales in Wards Intelligence’s Small Specialty segment fell 26.3% in 2018, to 69,118 units. All models declined, including the Hyundai Veloster, which saw a new generation go on sale last year.

Used Supras are collector cars and have been getting increasingly higher prices. Hagerty reported last week a ’94 Supra received a record price for a factory model, $121,000, on the website Bring a Trailer.

On Saturday, Jan. 19, the first production Supra, painted matte gray, will be auctioned off at the annual Barrett-Jackson auto auction in Scottsdale, AZ, with proceeds going to the American Heart Assn. and the Bob Woodruff Foundation.

Like the BMW Z4, the Supra is being assembled by Magna Steyr in Graz, Austria.

At a media event Sunday night for the sports car, a Toyota official says the automaker has not officially begun taking reservations and could not speak to whether demand in the first year may outstrip supply.