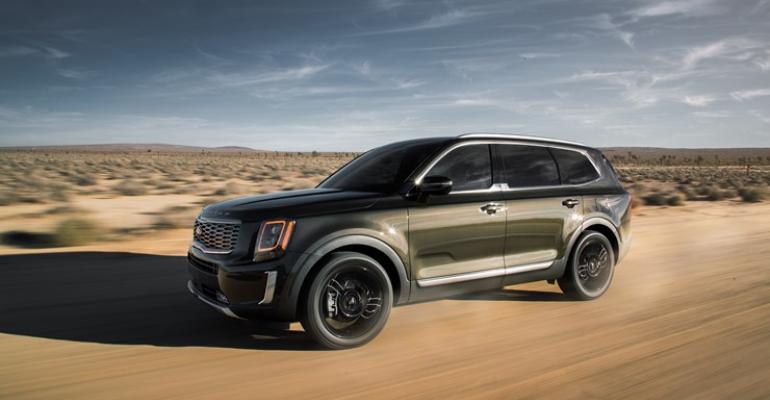 The Telluride has on-demand all-wheel drive, a self-leveling rear suspension and nearly the same powertrain and output as the new Hyundai Palisade.

The luxury-leaning Telluride is Kia’s latest effort to capture the 3-row CUV intender.

The brand previously retailed a 3-row version of the midsize Sorento CUV, but this new model has a “bigger, bolder, more rugged type of look” than that, Michael Cole, chief operating officer-Kia Motors America, tells media following the Telluride’s unveiling.

While the Telluride is billed as the largest-ever Kia, Cole considers it a midsize CUV, not a large one like the Chevy Traverse, Nissan Pathfinder or new Subaru Ascent.

He sees the Telluride moving Kia “into that territory where you have products like (the Ford) Explorer, (Toyota) Highlander and (Honda) Pilot),” he says.

Cole won’t say if he expects the Telluride to post similar numbers.

“We’re not going to share any sales volume targets just yet,” he says.

Kia will build the Telluride at its West Point, GA, vehicle-assembly plant.

Cole says it will not impact Sorento output, however, noting the 360,000-unit plant “has the capacity.”

Last year, with the launch of the new 2-row Santa Fe, Hyundai/Kia shifted Santa Fe CUV production from West Point to Hyundai’s Montgomery, AL, plant, to make way for the Telluride and its twin, the 3-row Hyundai Palisade, at West Point.

The Telluride has on-demand all-wheel -drive, a self-leveling rear suspension and nearly the same powertrain and output as the Palisade. It has a 291-hp version of Hyundai/Kia’s Lambda II 3.8L gasoline-direct-injected V-6 with Atkinson cycle, making 262 lb.-ft. (355 Nm) of torque and mated to an 8-speed automatic. Horsepower is achieved at the same rpm, 6,000, as in the Palisade, while peak torque comes at 5,200 vs. 5,000 rpm.

The vehicle is being billed as the first Kia designed especially for the U.S. and has a number of features designed to appeal to the off-road crowd, including center-console grab bars, downhill brake control and 5,000-lb. (2,268-kg) standard towing.

Luxury touches inside the cabin (below, left) include optional doubled-stitched and quilted Nappa leather upholstery, which also has extra padding, as well as matte-wood and faux-brushed-metal trim pieces. 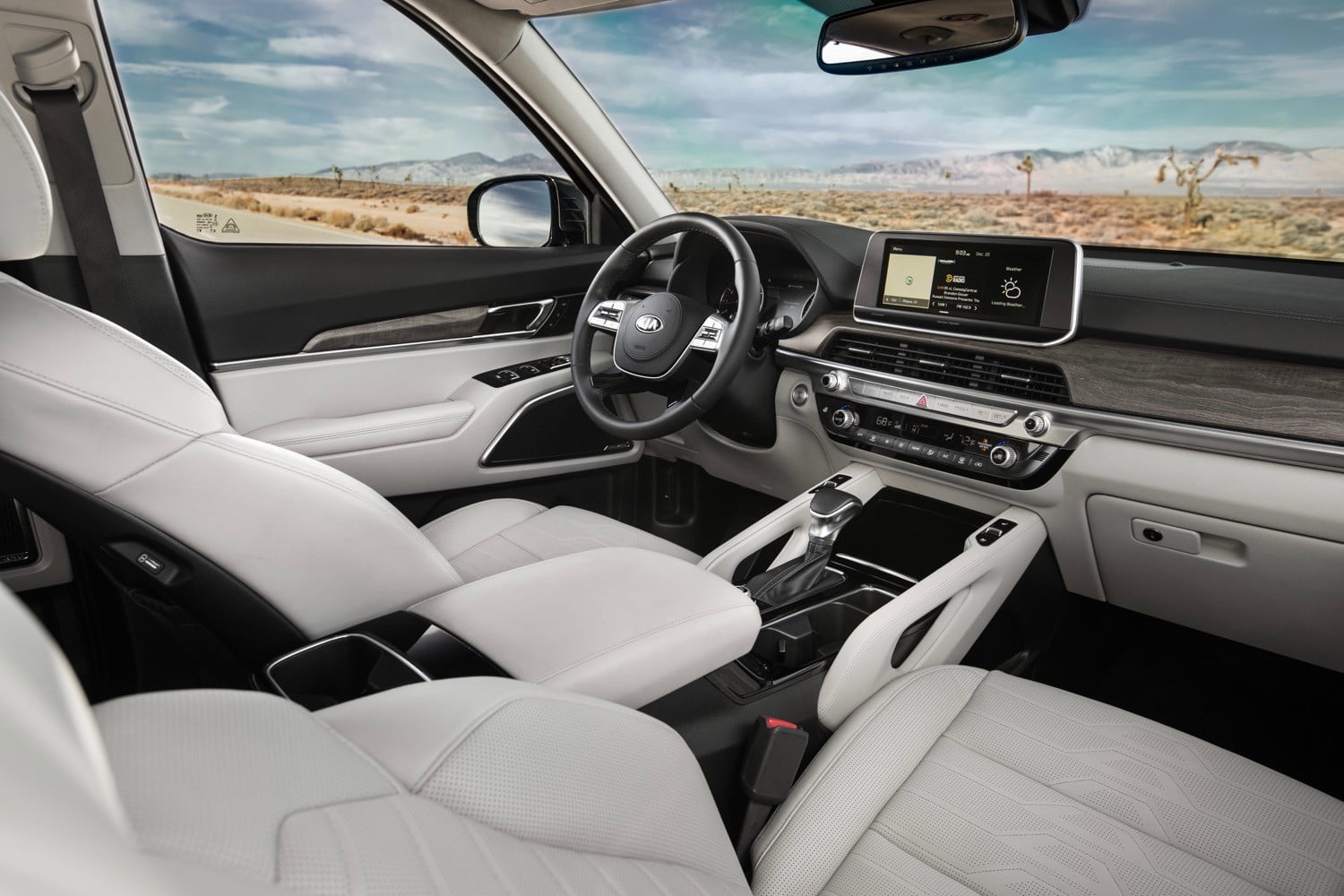 Available are a 10.25-in. (26-cm) touchscreen and a 10-speaker Harman/Kardon audio system. Five USB ports are standard, while a sixth port is available.

The Telluride goes on sale this year, joining other new Kias such as the redesigned Soul and Soul EV, as well as an EV version of the Niro. Both EVs have ranges of at least 230 miles (370 km).

“The reason we’re so encouraged by these is, we really are one of the very few brands offering two EVs…in the small/entry size of the SUV market,” Cole says. “So we see them as a really strong pairing that demonstrate our ability to bring green vehicles, to offer that advanced technology, which I think is important for the future growth of the company.”

Meanwhile, he says KMA hopes to achieve total 2019 sales in excess of 600,000, in what many are predicting will be a soft year for light-vehicle sales in the U.S.

“We’re not going to share our exact goal right now, but we believe 600,000-plus is very achievable given the product lineup we now have,” Cole says.