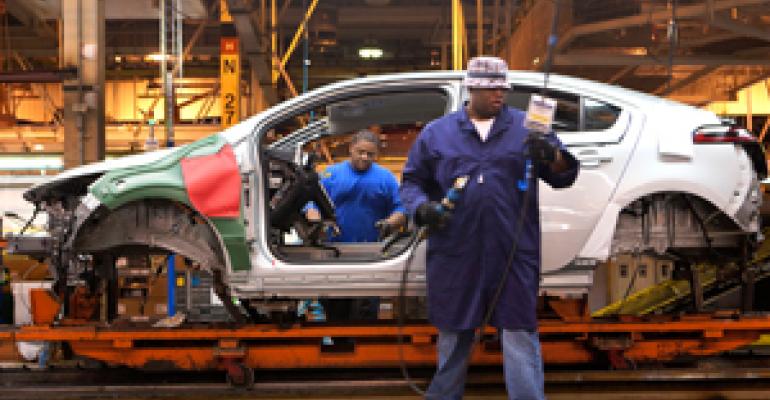 “The sales pace is what we expected,” Perry tells Ward’s at an event here linked to the annual Woodward Dream Cruise festival of classic cars in suburban Detroit.

GM sold 125 Volts in July, down sharply from 561 in June, according to Ward’s data. The car’s peak month was 608 units in March. It also saw a dip in February to 281 deliveries, because produced units were reserved for dealer-demonstration models.

Perry blames a dearth of inventory for the swoon, created when the auto maker shut down the Volt’s Detroit-Hamtramck assembly plant for four weeks in June and July to change over tooling for ’12 model-year updates.

“There weren’t any available,” he says.

GM expects with the model-year changeover complete, production of the Volt should increase substantially in coming months to 16,000 for the year. Through June, GM built 3,906 units, Ward’s data shows. Some were Opel Ampera models for export to Europe.

Perry says Volt sales also will pick up after availability expands from seven markets today to nationwide in the fourth quarter. He rejects the idea of sagging popularity for the Volt, which recent data from the consultancy CNW Research suggests.

According to CNW, more than 21% of first-adapters in March said they were likely to consider the vehicle. The number dropped to 14.6 % in July. Its consideration also fell among general consumers, although interest in electric vehicles generally increased.

“The signs aren’t encouraging,” the researcher says in the report, which polled 8,500 people.

Perry thinks otherwise. “We’re not seeing it,” he says. “They are on the dealership lot for maybe 48 hours.”

Perry does admit GM recently pulled back advertising of the Volt because of availability issues the model-year changeover would create. Expect advertising to pick back up around October, when inventories replenish and the car goes national.

Perry, who took over global responsibility for the Chevrolet brand last week after leading GM’s U.S. marketing efforts since January, thinks the Cadillac ELR announced last Tuesday will be well-received.

The ELR uses the same extended-range propulsion system as the Volt. It first bowed as the Converj concept two years ago. Pricing, performance and time-to-market were not announced.

“Cadillac is our lead brand,” he says. “It should be our leader in technology.”

The luxury EV segment boasts few buyers. But with niche auto maker Tesla making inroads with its sports car and German auto makers planning models for the U.S. in coming years, it makes sense to join the fray, Perry says.

“It’s not a huge market. But it is a market we see growing over the next several years.”