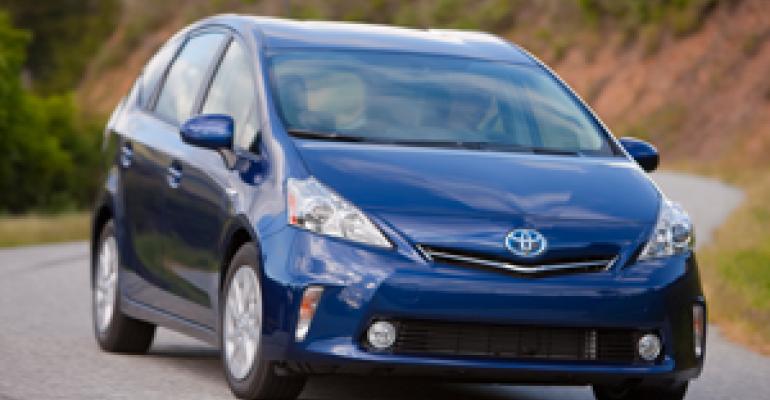 Toyota&#8217;s VPNS system emits a car-like &#8211; albeit science-fiction-leaning &#8211; whirring noise to alert pedestrians to the approach of an often-silent-running hybrid or EV. ANN ARBOR, MI – U.S.-market Toyota hybrids and forthcoming electric vehicles will pump up the volume by including the auto maker’s noise-making Vehicle Proximity Notification System as standard equipment beginning with the ‘12 model Prius V due this fall.

The VPNS, offered as a dealer-installed option on Priuses sold in Japan since late-2010, emits a car-like – albeit science-fiction-leaning – whirring noise to alert pedestrians to the approach of an-often silent-running hybrid or EV.

Although not yet a regulation in the U.S., the National Highway Traffic Safety Admin. is due to issue a ruling on sound systems for EVs and hybrids within the next two years out of rising safety concerns for pedestrians, in particular the blind and elderly.

Nissan already includes a similar system for its Leaf EV and M Hybrid sold in the U.S., as does Hyundai for the Sonata. The Mitsubishi i and upcoming Ford Focus EV feature such devices as well, but the Chevrolet Volt extended-range hybrid does not broadcast any warning sounds.

Unlike the Japan-market Prius and Nissan Leaf, Toyota’s U.S. cars will not come with a switch that allows the system to be deactivated.

The VPNS consists of a forward-facing speaker mounted in the engine compartment and a control system that adjusts the sound based on the speed of the vehicle, brake-pedal positioning, whether the internal-combustion engine is running (in the case of a hybrid) and the transmission’s shift position.

Toyota engineer Daniel Smith says the auto maker worked hard to fine-tune its frequency selection and get volumes to the correct levels to ensure pedestrians would hear the car approaching but not annoy drivers with the sound.

“We wanted the sound to be transportation in nature – but futuristic,” Smith says, admitting his friends say they think of sci-fi TV shows such as “Star Trek” and “The Jetsons” when they hear the sound.

Much testing was done to ensure the sound frequencies wouldn’t blend in with ambient noise and be ignored by pedestrians, or that the band range didn’t reach frequencies older people are unable to hear, he adds.

“You want a mix of high-low frequencies to prevent masking by the environment,” Smith says.

The system emits sound up to 15 mph (24 km/h), and the pitch rises and falls with the speed of the vehicle – variability unique to Toyota’s system, Smith says.

The device allows the Prius to match the sound-pressure level of a conventionally powered vehicle, filling in the sound gap from 0-15 mph when the hybrid is running solely on battery power.

In a drive-by demonstration at the Toyota Technical Center here using the current Prius, the system emits a low-volume hum that most observers appear to strain to hear.

Out on the street, the sound seems less futuristic in nature and has a deeper tone than it does when played indoors. “It’s more like wind noise, tire noise,” Smith points out.

Following the Prius V application, the system will be rolled out to the Prius Plug-In model due in first-quarter 2012 and eventually will make its way to standard Prius hybrids and future EVs headed for the U.S. market.