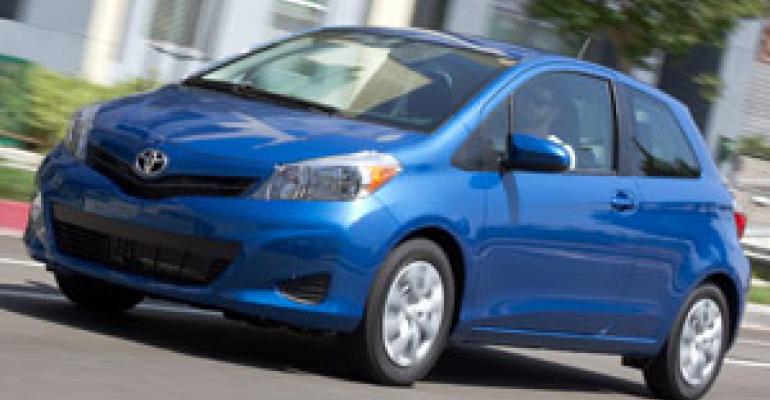 One exception was the Camry, which still is suffering from low inventory levels. Sales slid below year-ago, with traditional models down 5.3% and hybrids plunging 71.0%. “You can see I’m having a little bit of crow for lunch,” Bob Carter, group vice president and general manager-Toyota Div., tells the media in a conference call. He earlier predicted Toyota would be above year-ago in October, both adjusted and unadjusted.

“On a retail basis, we were very close to year-ago,” he says. “When we spoke last month, I knew it was going to be a heroic effort to pass October. Nevertheless, that was our plan.”

Despite the daily-selling-rate drop, Toyota saw its best month since April, WardsAuto data shows, driven by a few select models.

The newest-generation Yaris subcompact, with sales of 6,792 units, saw its highest monthly volume in October since May 2009, WardsAuto data shows. Deliveries soared 160.5% compared with year-ago.

However, sales of the Camry, which still is suffering from low inventory levels, slid below year-ago, with traditional models down 5.3% and hybrids plunging 71.0%.

The new ’12 Camry Hybrid goes on sale this month.

As with September, Camry’s higher trims were in strong demand, with the sport-grade SE accounting for nearly 40% of all Camry deliveries in October, Carter says.

Despite RAV4’s 10,680 sales, its highest monthly volume since April, deliveries still were down 24.5%, due to lack of availability. The Corolla also was short on inventory. But with Toyota’s new Blue Springs, MS, plant up and running, dealer stock is being replenished.

Lexus car sales dipped 2.9%, with all models but the LS registering declines. The new CT 200h racked up 1,511 deliveries in October, with a year-to-date total surpassing 10,000 units. The other Lexus dedicated hybrid, the HS 250h, continued to underwhelm, down 73.1% for the month and tumbling 72.8% for the year.

The Scion brand could use a jolt the new iQ, on sale later this fall on the West Coast, likely will bring. The three current Scion models fell last month, with the newer tC slipping below year-ago for the first time in months, down 7.4%.

Both Toyota and Lexus are pulling ahead their holiday-themed year-end marketing campaigns, Carter says. Toyota’s incentives are at historic levels, two-thirds the industry average compared with the prior rate of one-third.

Toyota starts November with 159,000 units in inventory, while Lexus has 21,000. Both brands ideally would like more vehicles. Carter says the build-up to 200,000 units, the normal stock level before Japan’s March earthquake, is expected to be reached later in the year or first-quarter 2012.

Meanwhile, Toyota is monitoring the flooding situation in Thailand. Like Honda, it has eliminated overtime at its North American plants to conserve parts. But unlike its competitor, Toyota has yet to cut normal output.

“What we’re seeing right now is a lot of evaluation on how the (flood) is affecting the parts- supply line to our plants both here and in Japan,” says Randy Pflughaupt, vice president-sales administration for Toyota Motor Sales U.S.A.

“It’s fairly early to understand what the total impact will be going forward. You’ll see some minor slowing down of the production line as we ascertain the parts impact.” By December or January, he expects production to be “mostly recovered,” given current conditions.