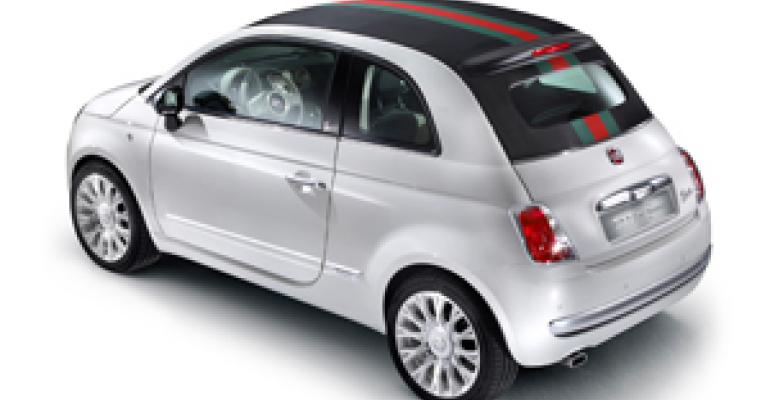 Haartz was faced with the daunting challenge of reproducing the &#8220;Gucci Web&#8221; &#8211; the green-red-green stripe that is the signature of the 90-year-old fashion house. Honoring one iconic brand is tough. Imagine what it’s like working with two. That’s what Haartz confronted when it was chosen to supply the soft-top fabric for Gucci’s ’12 Fiat 500c cabrio.

In particular, the Massachusetts-based supplier was faced with the daunting challenge of reproducing the “Gucci Web” – the green-red-green stripe that is the signature of the 90-year-old fashion house.

“In a lot of cases, we have to go through several color loops to get the exact shade,” he tells WardsAuto. “We got it on the first loop.”

But there was some luck involved. Haartz already had some similar colors in its palette. And the Gucci Web’s longitudinal orientation was consistent with the weave of the 3-ply fabric featured on the 500c.

Had designers chosen to position the Gucci Web laterally – perhaps in keeping with equine girth straps that originally inspired the pattern – there may have been a hiccup.

“It would have required us to employ a completely different type of weaving technology,” Williams says.

In addition, the innovative configuration of the Magna Steyr-supplied roof system proved an advantage. The 500c uses the car’s roof rails for support. “It’s not a full kinematic of moving metal parts that fold down,” he says. “The cover is sliding along these rails that stay in place.”

Haartz needed only to ensure the tension did not distort the exacting proportions demanded by Gucci.

“It’s very easy to paint a straight line on a car hood,” Williams adds. “It’s not easy to make a textile that stretches and elongates exactly the way you want it.”

And just to make sure Gucci was satisfied with the crispness of the lines, Haartz used the “fairly unique” technique of “singeing,” Williams says. That involves the controlled use of a precise flame to burn away unwanted fibers.

“It basically cleans up the surface of the fabric to make the transition from black to red to green to black more defined,” he explains.

Haartz regards the 500c as a symbol of a global proliferation of roof systems that afford an open-sky experience.

The auto industry’s market leader, Haartz supplies fabric to every major brand from Aston Martin to Volkswagen. The supplier helped Jeep, Fiat’s sister brand under the Chrysler umbrella, deliver SkySlider for the Liberty, which glides open and closed much like the 500c’s roof.

However, less U.S.-market production is being devoted to convertibles than previously, according to WardsAuto data. Convertibles accounted for 1.1% of domestic car output in 2010, down from 3.5% in 2006.

Imported-model cars saw installations fall to 41.8% from 44.0% over the same time period.

But Williams remains confident in the market, if only because soft-tops afford less compromise than in years past.

“There’s been a big advancement – especially in Europe with cars like the Audi A4, the BMW 1-Series, the CLK from Mercedes – where the roofs are significantly quieter and really are on par with the coupes and sedans that they match up with,” Williams says. “Our testing has shown that, based upon selection of textiles, you can reduce the interior noise by over three decibels.”

The Gucci-edition 500c certainly is resonating with consumers. Chrysler reports the designer-label cabrio is twice as popular as its Fiat-brand cousin, with the hard-top to cabrio ratios of 80:20 and 60:40, respectively.