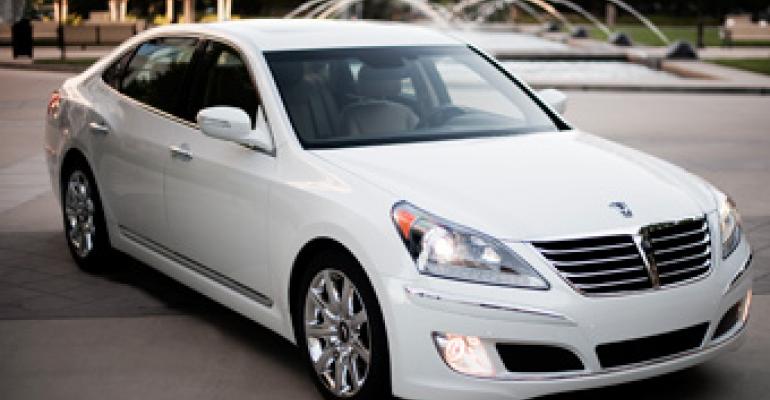 The issue is whether to pursue stand-alone luxury stores or stick with an elevated level of customer service for the auto maker&#8217;s ultra-luxury sedans, which may prove difficult as sales volumes grow. PORTLAND, OR – Hyundai Motor America’s move toward luxury branding will depend on how easily the auto maker’s ultra-convenient customer-service program can be expanded, a top executive says.

The service includes a “your-time, your-place” vehicle demonstration by dealers, who deliver the Equus premium large sedan to a potential buyer’s home or office. There also is an “at-your-service” free maintenance program, where the dealer picks up a car from the owner, leaving a Genesis or Equus model as a loaner.

“What we’re studying now is the scalability of that concept and how far we can take it,” he says. “That will play into our final decision.”

The issue for Hyundai is whether to pursue stand-alone luxury stores or stick with an elevated level of customer service for its more premium models.

Krafcik says the “at-your-door” service is easy for dealers to handle right now due to the Equus’s modest sales. But trying to do this with higher volumes, or expanding the scheme to other models, may prove challenging.

Hyundai sold 1,991 Equus cars through August, WardsAuto data shows. That’s an average 6.6 units by the roughly 300 dealers in the U.S. who offer the car.

Krafcik would like to avoid the fixed costs of a stand-alone luxury store, with “the marble and the waterfall and the faux putting green.”

By pursuing a higher level of customer service, “real value” is added, he says, citing BMW owners who told Hyundai they like the convenience of having their cars picked up for maintenance instead of having to wait in a service line, which takes a lot of time.

Luxury-car buyers indirectly pay for dealership creature comforts in the cost of their car, Krafcik says. Bypassing such niceties means the auto maker can price the Equus tens of thousands of dollars less than competing models.

Deciding on a dealership strategy takes on greater importance as Hyundai prepares to add the next-generation, front-wheel-drive Azera sedan to its luxury lineup. Krafcik describes the new model as a “premium large, upper-mid, sporty family sedan.”

The car, launching here in first-quarter 2012, has a Sonata-like face but Jaguar-type rear.

The Azera will take on competitors, including the Nissan Maxima, Toyota Avalon, Buick LaCrosse and “maybe the high end of the (Ford) Taurus line and Lexus ES, (with a) fairly well-defined price positioning in the low $30,000s,” he says.

Reflecting Hyundai’s fluidic sculpture design language, the new Azera already is on sale in South Korea as the Grandeur and has become that country’s best-selling model in recent months.

The sedan performed well in customer-research clinics in the U.S., Krafcik says, giving Hyundai confidence it will find success with buyers here, including some younger than is typical for the large, FWD-sedan segment.

“This fluidic sculpture design, which the Azera definitely carries, seems to appeal to people of all ages,” he says. “Our current Azera buyer is the oldest (67 years) in the Hyundai family. The new Azera would bring that down quite a bit.”

Although large FWD cars appear to be a dying breed in the U.S., destined for rental-car fleets, Hyundai wants to stay in the segment.

“When you pull (rental cars) out, the true retail volume is pretty small,” Krafcik says. “But we still saw it as something to go after. With the Sonata 4-cyl.-only approach, we had a nice reason to stay in that segment with the V-6 Azera. It made a lot of sense.”

He also says the Azera is important for Hyundai globally, selling well in some Middle Eastern markets. “So it’s in the portfolio,” Krafcik says. “Why not continue it as a new design comes to market.”

Sales of the current Azera, last new in 2005, are minuscule, down 37.9% through August to 1,328 units. But Hyundai sees a healthier outlook for the new generation.