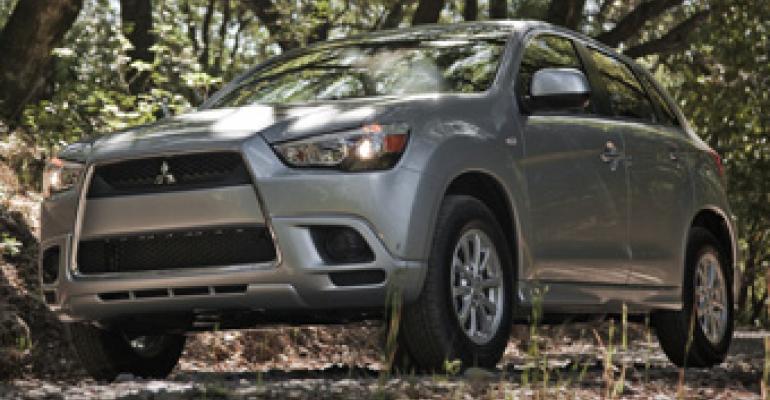 Six more PHEVs or EVs will follow on a global basis before the end of 2015, as part of a plan to remake the brand into an alternative-propulsion pioneer, a top executive says. Mitsubishi earlier said it plans to launch production of the CUV at its Normal, Il, plant in summer 2012. Sold as the RVR in Japan and ASX in other markets, the compact CUV currently is exported from the auto maker’s Okazaki plant in Aichi.

The Outlander Sport PHEV version, shown in concept form in Tokyo two years ago, would mark the second electrified U.S. product for the Japanese car company. Its tiny i-MiEV, a fully electric A-segment car, arrives in California and Hawaii in November.

However, Mitsubishi will shorten the i-MiEV name to “i” when it goes on sale in the U.S., says Yoshikazu Nakamura, corporate general manager-Mitsubishi EV Business, explaining the truncated name is easier for consumers to grasp.

“MiEV,” which stands for Mitsubishi Innovative Electric Vehicle, will remain as part of the nomenclature, but refer specifically to the technology.

Six more PHEVs or EVs will follow on a global basis before the end of 2015, as part of the auto maker’s plan to remake the brand into an alternative-propulsion pioneer.

“(The Outlander plug-in) would go to the U.S. to help establish a new Mitsubishi image,” Nakamura says during testing of the North American-specification i-MiEV at Mitsubishi’s technical center here.

Nakamura says Mitsubishi will impart upon consumers the auto maker’s 40 years of electric vehicle-making history and highlight the fact it builds the first mass-production EV with the i-MiEV, which has been on sale in Japan and Europe for the last two years.

The global production target for the i-MiEV is 25,000 units in fiscal-2011, Nakamura says., including versions built by PSA Peugeot Citroen.

The timing of the Mitsubishi brand’s makeover could not be better, he adds. The i-MiEV arrives in the U.S. as interest in EVs has been rising sharply due to high fuel prices.

“People are changing, and the i-MiEV is unique. And unique means brand new.”

The auto maker’s plan calls for 20% of its global production mix to include EV and PHEV technology, which encompasses applications Mitsubishi sells to other OEMs.

“We have a strong plan for hybrids and EVs for all of our products, depending on the market and customer needs,” Nakamura says.

However, Mitsubishi’s alternative-propulsion strategy does not call for bringing an exclusive product to market, as some other auto makers have chosen. The approach would be too costly, he says.

The company, instead, will modify products that have internal-combustion engines.