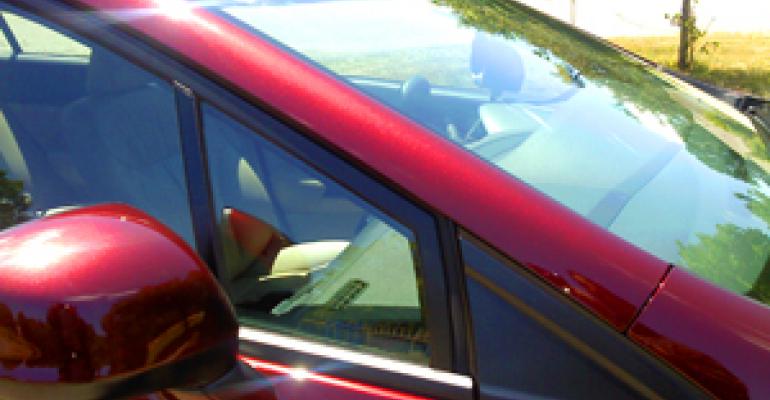 Cars and trucks are supposed to be getting safer, yet there is one thing literally standing in the way: A-pillars that are expanding to meet roof-crush requirements, while obscuring pedestrians. The automotive design community sat up and took notice in 1996 when the Volkswagen Passat launched in Europe on the new B5 platform, then arrived in the U.S. two years later.

The car’s A-pillars were bowed, the windshield more steeply raked and the roof was a shockingly complex array of angles and flowing lines that seemed to connect the hood to the trunk lid.

It represented a radical departure from the slabby, straight-lined roofs and A-pillars of vehicles on the road at the time.

“The Passat was a big deal. That car caused a lot of reaction – it was real positive,” recalls Larry Erickson, who at the time was working as a designer at General Motors and now chairs the Transportation Design Department at Detroit’s College for Creative Studies.

“It was a really contemporary style,” he says. “That was one of the first cars that took aesthetic advantage of the A-pillar. It was contributing as a design element to the construction of the roof.”

The Passat was the first of many sedans soon to arrive with similarly tapered rooflines and bowed A-pillars that would set the template for improved aerodynamics and more dramatic styling.

But this trend has brought the industry to a potentially dangerous intersection, literally, as auto makers prepare to meet new federal roof-crush standards that take effect in September 2012.

The code requires roofs to be at least three times more rigid when compared with vehicles of the recent past, providing better occupant protection in the event of a rollover.

That means roofs and the pillars supporting them must be stronger. Sturdier pillars often translate into structures that are larger to hold such weight, especially when oriented on such a steep angle.

These expanding A-pillars designed for improved safety ironically pose a hazard to pedestrians and bicyclists, who easily disappear from the view of a driver making a left turn at a stop sign in a residential neighborhood.

The problem becomes compounded in a growing number of vehicles, especially coupes such as the Chevrolet Camaro and Ford Mustang with high beltlines, low roofs and shallow windows.

So people shouldn’t expect A-pillars to grow significantly larger in the next year.

But the issue was serious enough to warrant a thorough investigation by the University of Michigan’s Transportation Research Institute (UMTRI) in 2008 on behalf of the National Highway Traffic Safety Admin.

Led by Matthew Reed, a research associate professor at U-M, the study focused on how A-pillar geometry obscured sightlines for 87 men and women driving 11 nominally identical test-fleet sedans over the course of four weeks.

GPS data and parametric curves were employed to reconstruct each turn at the monitored intersections, and simulations were used to determine how long specific points in the intersection were obscured by the A-pillar.

“The analysis showed that geometry of the A-pillar, over the range observed in vehicles, has a substantial effect on the size and position of the most obscured regions of the intersection relative to the vehicle trajectory,” Reed writes in the report.

“For left turns, the most highly obscured zone is immediately to the left of the vehicle path at the entrance to the intersection departure lane. In a typical turn, a pedestrian standing at this location would not be visible from the normal driver eye locations for a substantial percentage of the turn.”

The report calls for further study to consider vehicle speed, in particular to determine the time drivers have to detect and react to pedestrians in or near the vehicle path.

UMTRI is completing additional research on the subject for NHTSA based on crash data, but a release date has not been announced.

“We see the issue of roof crush vs. visbility as a good issue to look at,” Michael Flannagan, associate research professor at UMTRI, tells Ward’s. “It’s a key thing behind our work.”

The Insurance Institute for Highway Safety also identifies the challenge of simultaneously protecting occupants in rollover accidents and pedestrians from sight-challenged drivers.

IIHS began publishing roof-strength ratings in March 2009 after its research found strong roofs reduce the risk of fatal or serious injuries in rollover crashes. Likewise in frontal crashes, strong A-pillars absorb tremendous amounts of energy and channel the rest through the roof.

“The research behind all of the IIHS tests indicates that whatever the crash mode, the key to protecting people is to keep the occupant compartment intact. A stronger safety cage requires stronger pillars,” David Zuby, chief research officer for IIHS, tells Ward’s in an email.

An unfortunate byproduct of a beefier A-pillar is a hindered sightline. “However, stronger pillars can also be achieved by using stronger materials – something that some manufacturers are pursuing more aggressively than others,” Zuby writes.

To qualify for a good roof-strength rating from IIHS, a vehicle must withstand a force equal to four times its weight before the roof crushes 5 ins. (12.7 cm).

NHTSA’s FMVSS 216 mandate, issued in May 2009 and phasing in beginning Sept. 1, 2012, requires vehicle roofs to withstand three times the vehicle weight. By the ’17 model year, 100% of each manufacturer’s fleet must comply.

Testing for roof crush is a complicated process. The vehicle must be placed in a fixture so the suspension cannot compress, says Brian Latouf, director-structure integration and body systems computer-aided engineering at General Motors.

A large plate attached to a robotic arm is then pressed on an angle at a constant speed into the roof rail, just behind the A-pillar at the specified pressures.

IIHS testing requires crushing only one side of the vehicle, while the federal code specifies turning the vehicle around and crushing both sides, Latouf says.

The federal government first began regulating roof strength in 1973, and testing required a vehicle to withstand one-and-a-half times its curb weight. That testing, which remained essentially unchanged until the new code takes effect next year, was done only on one side of the vehicle.

An A-pillar performs many tasks. Besides anchoring the windshield and the beginning of the roof, it must manage water on the windshield and is an important channel for electrical wiring for overhead lighting and the rear of the vehicle.

It also contains curtain airbag tethers and tether attachments. Many A-pillars today integrate speakers as part of audio systems, as well as grab handles in big pickup trucks and SUVs.

Cutting a cross-section of an A-pillar would reveal very little open space. “It’s pretty tight in there,” Latouf says. “You have to have certain cross-sectional space to be structurally stable under higher loads.”

His team also pays close attention to an A-pillar’s impact on sightlines as a vehicle program progresses, keeping in mind the aesthetic importance inside and out.

“We try to consider early field of view, we call it,” Latouf says. “We look at ‘obscuration,’ and we look at eyesight from the customer at the driving position – what can they see, is there obscuration like pillars? We try to minimize it. We go through the process of pressuring our architectural layouts to minimize these sections.”

In some cases, through iterative design, his team finds ways to shrink the A-pillar, without impacting rigidity.

Inside the vehicle, the trim on the A-pillar must be soft enough to meet federal head-impact standards, Latouf says.

That requires foam or other energy-absorbing materials that are especially important in protecting unbelted occupants.

Hence, the A-pillar becomes even larger.

“That A-pillar doesn’t move much when your head hits it,” CCS’ Erickson says. “Even though in the U.S. every state requires seatbelts, car companies still need to design for unbelted occupants.”

Another important function of the A-pillar is to integrate seals for doors. A tight fit is critical to minimize wind and road noise, even after many years of use.

“That seal must really perform,” Erickson says. “Wind noise and integrity of the A-pillar always has been an issue” for designers.

As volatile fuel prices tip the U.S. vehicle fleet toward small cars, particularly hot new arrivals such as the Ford Focus, Hyundai Elantra and Chevy Cruze, the size of A-pillars becomes even more critical: The smaller the interior, the closer the driver sits to the A-pillar, making it harder to see around.

The all-new ninth-generation ’12 Honda Civic now on sale has A-pillars that are 9% smaller than its predecessor in an effort to improve visibility.

Honda engineers used higher-strength steel for the A-pillars, and the new Civic achieves the highest-possible score of “good” in the IIHS roof-strength test, as did the previous model.

The new Civic also integrates a larger pane of fixed trapezoidal quarter-glass and a smaller sub-pillar to hold it in place next to the side-view mirror.

Likewise, the all-new Chrysler 300 and Dodge Charger were purposely engineered with thinner A-pillars to improve visibility. Both cars also rate “good” from IIHS for roof strength.

As Chrysler designers and engineers worked on the vehicles, they were mindful of customer concerns about outward visibility.

By using ultra-high-strength steel, composites and advanced computer-impact simulations to reduce pillar size, outward visibility improved about 15% in both sedans compared with their predecessors, Cadiz says.

Toyota uses a metric to judge A-pillar size based on how much the view of the driver is obstructed. From the mid-1990s to the mid-2000s, the metric revealed A-pillars getting larger and visibility becoming more problematic.

“But recently we were able to decrease the obstruction for one of the models we are now developing relative to its current generation,” Jason Stadtherr, general manager-engineering design at Toyota Motor Engineering & Mfg. NA, tells Ward’s.

“In another example, on the Venza, we decided to adopt a fixed window in the A-pillar to improve the visibility under certain conditions,” he says.

It’s difficult to judge whether expanding A-pillars are a problem unique to the U.S. The European Union regulates pillar obscuration in vehicles, but the U.S. does not, says U-M researcher Reed.

Vehicles such as the Ford Fiesta that are designed to be world cars may have less pillar obscuration than those intended only for the U.S., he says.

“We lack quantitative models that express the safety cost of vision obstructions,” Reed says. “We've worked on it, but it's difficult to see the relationships in crash data.

People are highly adaptive, and any vision effects are buried in other larger effects due to exposure and driving style.”

Even without hard proof, CCS’ Erickson says A-pillars today “just feel bigger. If you look at a 1960s luxury car, A-pillars look one-quarter the size they are now. Part of it is (rear-view) mirrors have gotten bigger, too.”

But upsizing has not been intentional.

“I don’t think stylists ever went out and said, ‘Let’s make A-pillars bigger,’” he says. “It’s safety and technology and everything you’re trying to achieve.”

And don’t forget styling and the sex appeal and sporty countenance of a windshield that is more horizontal than vertical.

“In the old days, people sat closer to the windshield, and it was more upright,” Erickson says. “Now, the auto makers kick the A-pillar forward. It used to be only the Corvette had a fast windshield. Now, everything’s got a fast windshield.”

And oddly enough, VW’s new Passat, launching now in Chattanooga, TN, has lost some of the drama in its roofline, at least for Erickson.

“They seem to have moved on to a different form,” he says of VW styling with the Passat. “I’ve looked at the car, and I don’t remember the A-pillar.”