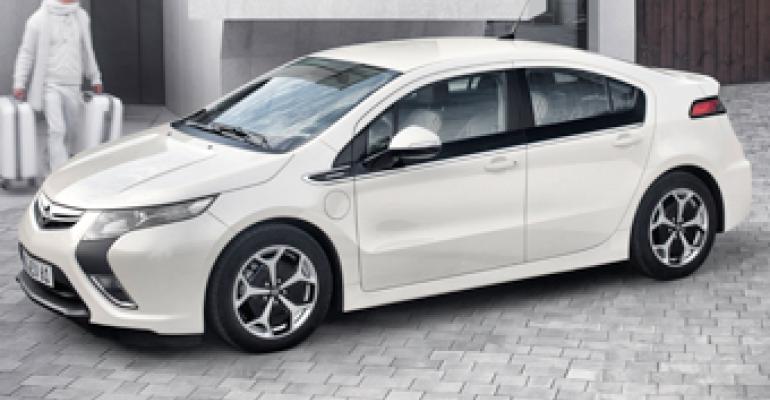 Adam Opel is set to launch its Ampera extended-range electric vehicle in Germany next month, but the auto maker’s top sales executive says the Chevrolet Volt-based car already appears to be an early success.

Initial projections called for sales of 8,000 Amperas in the first year, but the auto maker now is eying 10,000-15,000 units, Alain Visser, vice president-sales, marketing and aftersales for Europe, tells WardsAuto in an interview.

“We’ve got over 6,000 reservations, which is way above what we anticipated,” Visser says of the process in which a buyer can reserve an Ampera via the Internet with a E150 ($208) deposit.

General Motors, which has encountered some hiccups in ramping up production of the Volt at its Hamtramck, MI, assembly plant, is expected to be able to meet forecast demand for the Ampera.

“We obviously have very direct discussions with Detroit,” Visser says. “Our current indications are we have the capacity from a global point of view to fulfill (demand for the Ampera). So we are OK.”

Ampera is an important part of Opel’s efforts to move upmarket, the executive says.

“I think it is a really big step here in Europe, because there are a lot of manufacturers talking about e-mobility…but we (are) the only one with an electric vehicle with no range limitation that is actually on sale today and not a concept car,” he says.

“It’s a massive opportunity for the Opel brand.”

Visser points to recent market-share gains as evidence the auto maker is hitting its brand-building targets. Opel’s penetration of the European light-vehicle market grew to 5.1% through August, from 4.8% year-ago, according to WardsAuto data.

“We want to position ourselves more and more as the German brand, combining the German substance of quality and technology with emotion,” he says. “That’s why design is becoming so important for the Opel brand.

“The fact that our market share is going up is confirmation we’re on the right path.

And we plan to increase and strengthen our position even more in 2012, including growing market share.”

In addition to the Ampera, Opel is counting on a new small cross/utility vehicle due in second-half 2012 and a new small car below the Corsa in size, known internally as the Junior and slated for early 2013, to further buff the brand.

The Junior, Visser says, will be a high-style, upmarket small car targeted against the BMW Mini and Fiat 500.

“I like to call our vehicle an iPod on wheels,” Visser says.

“It’s really a cool, trendy vehicle – a super design (that) has the (potential for) achieving volume, because that market’s steadily growing. It’s big volume.

“It also shapes the brand. It is very good for the modern, German-brand image of Opel.”

In September, Opel unveiled the RAK-e concept at the Frankfurt auto show. The EV resembles a 4-wheeled scooter, with seats for the driver and single passenger positioned in tandem.

“Reaction to that vehicle was overwhelming and extremely positive,” Visser says, adding whether the car will make it to production remains unclear.

“It is not impossible, but it is not at all decided. It is something we would like to start studying, particularly given the positive feedback of the Frankfurt show.”