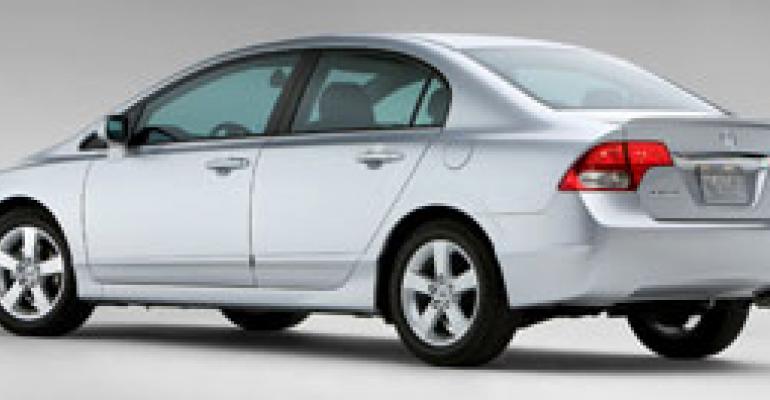 Toyota and Honda typically occupy the No.1 spot. But after supply chains were crippled by the earthquake and tsunami that struck Japan in March, inventories were paper thin.

The Honda Civic displaced the Chevrolet Cruze as the No.1 selling compact car in October, while the Toyota Corolla finished second, ending a 6-month winning streak for the Detroit nameplate and suggesting Asian producers may resume their dominance of the segment.

That’s if they maintain sufficient vehicle inventories. And for Honda, widespread flooding in Thailand could wash away those prospects.

Factor in Corolla’s Matrix-model sales and Toyota led the segment through October with 203,135 deliveries, followed by the Cruze with 201,819 and the Civic with 183,557. The Hyundai Elantra held fourth place with 160,922.

The Corolla and Civic typically occupy the top two spots in the compact-car segment, trading leadership from month to month. But after the Japanese earthquake and tsunami hit in March and disrupted the vehicles’ supply chains, Toyota and Honda were forced to trim production of their top sellers.

The Asians’ inability to maintain inventories helped clear the way for the Cruze, easily General Motors’ strongest compact-segment entry in decades, to overtake the No.1 spot in April.

Bob Carter, group vice president and general manager-Toyota Div., says in a conference call this week that availability of the Corolla in October was the best since the Japanese disasters.

But he also blames the auto maker’s relative underperformance in the month – down 4.3% against an industry that jumped 11.4%, based on adjusted data – on low Corolla stocks.

Toyota closed the month with an inventory of 30,720 Corollas, some 20,000 fewer units than it might carry in a typical month, WardsAuto data shows.

After rebuilding stocks of the Civic to some 18,771 units at the close of September, still some 35,000 short of what a normal month might see, Honda announced earlier this week floods in Thailand were forcing it to cut its North American production schedule in half while also eliminating overtime.

“A number of Honda suppliers in Asia currently are unable to maintain parts production, which is disrupting the flow of parts to our production operations in North America,” the auto maker said in a statement Monday.

Toyota, which expects to reach normalized inventory levels for its entire U.S. portfolio later this year or in early 2012, has not cut output due to the Thailand situation.

Don Johnson, GM chief sales analyst, says the auto maker has not witnessed any impact on production yet from the floods. He declines to speculate whether the Cruze may stand to benefit once again.

“In terms of what that means to the competitive landscape, we’ll let that play out,” he says, calling the Cruze’s slip in October a seasonal phenomenon driven by historically bigger truck sales in the month compared with cars.

Johnson also declines to comment on potential production adjustment for the Cruze, which in October experienced its second-straight month of sales below 20,000 units. In September, the Cruze accounted for 18,097 deliveries.

Cruze stocks stood at 39,990 units at the close of last month. “That vehicle continues to be very strong car for us and we will make sure we match supply with demand,” he says.

Other factors also weighed into a changing of the guard atop the compact segment.

Ford continues to address production issues related to the Focus, which last month saw 12,386 sales after just 10,309 in September. The Volkswagen Jetta also continues to assert itself in the segment, although its October deliveries of 13,058 units marked its lowest monthly total since February.

For the month, Small Cars staked their biggest claim on the U.S. market, 16.8%, since July. Through October, they accounted for 18.7% of the industry, good for third behind Cross/Utility Vehicles at 24.5% and Middle Cars at 20.2%, according to WardsAuto segmentation.