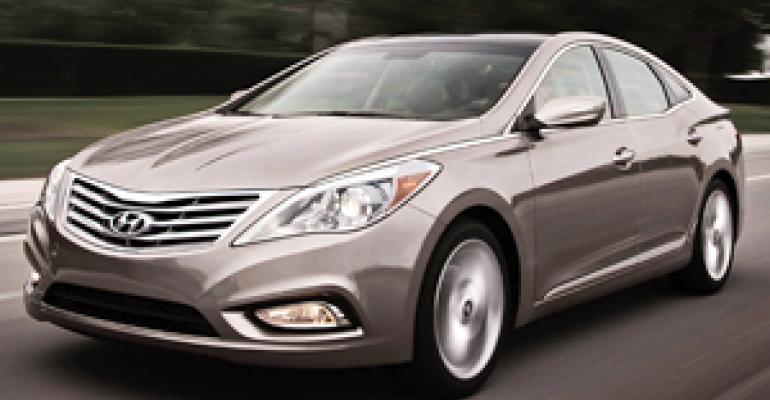 Dealers facing a stretch in getting more deliveries of Sonatas and Elantras may draw some satisfaction with the new Azera sedan, Hyundai&#8217;s largest front-wheel-drive sedan. SUPERIOR TOWNSHIP, MI – Hyundai’s 810 U.S. dealers are getting an unparalleled infusion of upmarket models, and many are responding by upgrading their facilities, says John Krafcik, head of the Korean auto maker’s American unit.

But he doesn’t try to soft-pedal one of the dealers’ major concerns: inventory shortages of popular models such as the domestically built Sonata and Elantra midsize and compact models.

“I wish we could keep a steady pace with sold-order cars,” Krafcik says at the Hyundai/Kia tech center here. “We anticipate a crunch with the entry-level Accent, which has been totally restyled for 2012.”

The subcompact Accent remains strictly an import. After notching its eighth consecutive monthly sales record in October, Krafcik says Hyundai expects a sellout of Accents for the entire ’12-model year.

“We have cut back on our mix of fleet sales to 11% of total retail deliveries from 18%,” he says. “But we are pressing for more units from Korea, and could use more production capacity in North America.”

Hyundai has yet to decide whether to respond with a third assembly plant in North America.

Dealers facing a stretch in getting more deliveries of Sonatas and Elantras may draw some satisfaction with the new Azera, Hyundai’s largest front-wheel-drive sedan.

Now, Hyundai has the Equus rear-wheel-drive premium flagship model “joined by the Azera and Genesis coupe and sedan,” he says. “That adds to Hyundai’s image.”