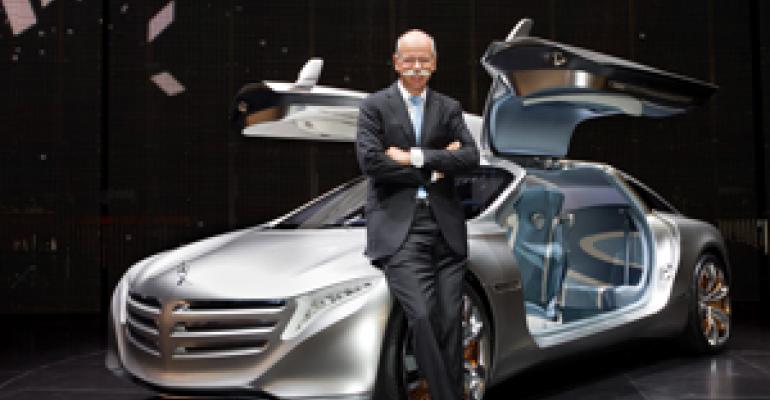 Hydrogen Back in Automotive Spotlight

Hydrogen-powered fuel cells remain attractive to some auto makers because batteries have cost, size and weight limitations that are unlikely to be solved in 30, 40 or even 50 years. When Daimler unveiled the flashy Mercedes-Benz F 125! concept car with much fanfare at the recent Frankfurt auto show, the auto maker made two key statements about the long-term future of the auto industry.

The first was Mercedes plans to make big, fast luxury sedans forever. The second point it made was vehicle batteries have serious limitations that cannot be solved in the foreseeable future. It made these prophetic declarations with three words: hydrogen fuel cell.

Fuel-cell powertrains are going through what Sean McAlinden, chief economist at the Center for Automotive Research, calls the “Hype Curve” for automotive technologies.

Once at the “peak of inflated expectations” in the late 1990s, they now sit at the bottom of McAlinden’s “trough of disillusionment.” However, recent events suggest they may be climbing upwards to a better place McAlinden calls “the slope of enlightenment.”

Ultra-clean and super-efficient, fuel cells were over-hyped in the late 1990s and early 2000s as the perfect solution for the auto industry’s fuel-economy and emissions woes.

Exotic-looking concept cars were trotted out at auto shows. Their designers promised they could be fueled up in minutes and driven hundreds of miles like current vehicles, yet their only emissions were water vapor.

Then reality set in. The technology was bulky and expensive, with prototypes costing $1 million or more. Most importantly, there was no hydrogen refueling infrastructure.

Enthusiasm waned, budgets were shifted and hydrogen and fuel cells were pushed from the spotlight by alternative powertrains that could be executed faster, such as plug-in hybrid gas-electrics and battery electrics.

But while the technology may have slipped from many radar screens, some auto makers, including Mercedes, General Motors, Hyundai, Toyota and Honda, have continued development efforts. They currently have test fleets on the road, and some are targeting series production as early as 2015.

Stefan Pischinger, president and CEO of FEV Group, a global powertrain and engineering-services company, says hydrogen-powered fuel cells remain attractive to some auto makers because batteries have cost, size and weight limitations that are unlikely to be solved in 30, 40 or even 50 years.

“Battery vehicles will be used predominantly for urban applications in larger cities, but they do not really make sense for long-distance driving,” Pischinger says.

Batteries do not have the energy density necessary to make long-range electric vehicles feasible in the foreseeable future, Pischinger says. On the other hand, auto makers already have demonstrated fuel cell-powered vehicles capable of traveling 250-300 miles (400-500 km) with one hydrogen fillup.

Clearly, the ability to propel large vehicles at high speed for long distances with zero emissions is high on Daimler’s agenda.

“With the F 125!, We want to show that large, comfortable and safe (sedans) have an excellent future, partly because they are able to operate with no emissions,” says Thomas Weber, who is responsible for group research and Mercedes car development at Daimler.

The argument for fuel cells remains strong. Hydrogen is the most common element in the universe. It can be created in large quantities by almost any country, making it the “most democratic” of all fuels, says Daimler Chairman Dieter Zetsche.

Fuel cells also are extremely efficient at creating electricity from a chemical reaction between hydrogen and oxygen.

What’s more, most of the major problems with the technology have been resolved or minimized. Auto makers say the cost and size of fuel-cell powerplants have been dramatically reduced. Durability in cold weather, once a major problem, has been solved. Crash safety also has been proven in real-world situations.

“We have amassed huge quantities of data to understand how the technology met expectations or where it falls short of what a customer expects as an everyday user,” Freese says.

GM’s current production-intent fuel-cell stack is 220 lbs. (100 kg) lighter than the previous generation in the test fleet and is small enough to fit in the engine compartment of a compact car, Freese says.

However, with only a few hundred hydrogen fueling stations existing in the world today, infrastructure remains a daunting hurdle for hydrogen to overcome, Pischinger says, especially when there is competition from other environmentally friendly alternatives such as natural gas and biofuels.

Even so, infrastructure issues can be solved with focused regional deployments of vehicles, Freese says. The Hawaiian island of Oahu has about 1 million drivers, but because it has a limited network of roads, 20-25 fueling stations could cover all the islander’s needs, he says.

GM launched a pilot program in Hawaii last year, with a local supplier of cooking gas that creates large quantities of waste hydrogen, to direct the waste gas to fueling stations.

“It doesn’t take a lot to make a place like Hawaii work,” Freese says.